For a convicted felon, being released from prison is a dream come true. Yet, there are certain things ex-convicts don’t possess the right to. The right to bear arms is one among them as the constitution makes it illegal for convicts to own or possess firearms.

This can reach down to those imprisoned for nonviolent actions, though they can file a complaint with the authorities to have this overturned.

Because offenders can no longer possess firearms, this could put pay to any chance of going hunting. Luckily, there are ways and weapons for such individuals to enjoy the experience of hunting after a spell in prison. A compound bow can be the finest example of such a weapon.

In most cases, target practice and hunting are among the more common uses for compound bows. 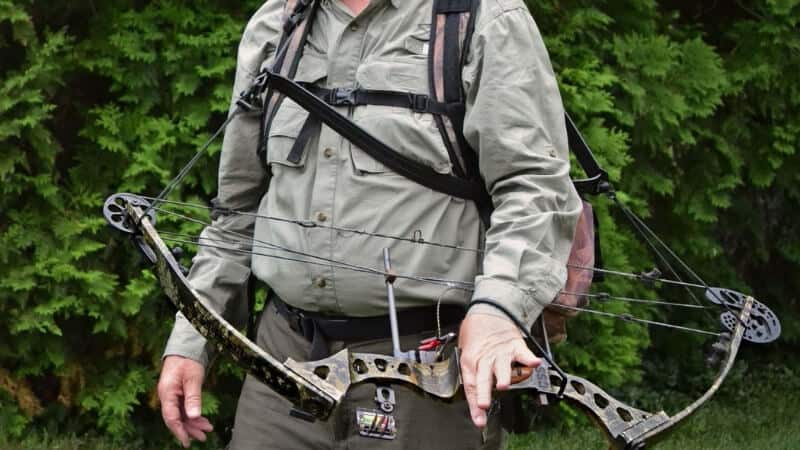 They are easier to use than most other bows and can be a great tool for new users, as they take less effort and force to use them. Because of this, it makes compound bows a suitable alternative to firearms for hunting.

However, there is more to it than can felons hunt with a bow, or would it be seen as unlawful possession of a deadly weapon? (Read Best Hunting Shows On Netflix)

In our guide, you can learn more vital information about firearm ownership and is a bow and arrow considered a firearm? By the end, you should know the answer to can felons’ bow hunt, and much of the answer is based on where they live.

Can A Felon Use A Compound Bow?

Prior to the 1968 Gun Control Act, some offenders could own firearms. These were convicts who had committed non-violent crimes. After the act was passed, that changed.

Convicts now have to surrender any weapons they may own under the new laws. They must also be cautious when they are in the presence of others who have firearms. This is done to avoid constructive possession becoming an issue.

Constructive possession occurs when an offender knows another person has a firearm nearby. They can even make use of the gun if necessary.

This means that felons are prohibited from hunting with others who are legally carrying firearms. To own a firearm, felons must follow strict laws and rules regarding firearm ownership. The state may charge them with a gun violation if they do not comply.

The good news is that these regulations do not apply to all firearms. Pellet guns, crossbows, and compound bows, for example. (Learn How Long Can You Leave A Crossbow Drawn)

Laws For Felons and Compound Bows

For some, hunting is not just an outdoor activity and is a way to make a living. To such individuals, it’s a basic right. Target practice, along with this, can be an enjoyable activity.

For such activities, firearms are typically used. If a felon is detected with a firearm, he or she faces a slew of punishments. Because of the conditions, felons must make do with what they have. A compound bow is a suitable substitute for weapons.

Before purchasing a compound bow, felons should conduct some study. It’s critical to understand the laws in their area governing bow ownership and possession compared to gun hunters.

The laws differ from one state to the next and can extend outside federal laws. It’s essential to check with the local authorities because other counties could have tighter rules about owning firearms and bows.

Non-felons may own compound bows in all 50 states, and besides a handful of states, felons have the same rights.

In Florida, for example, convicts can get hunting licenses and use compound bows during the bow hunting season. Other states following this are Idaho and South Dakota. In some states, however, offenders may not own or use explosive weapons.

Compound bows have a few different requirements depending on the state. Both felons and non-felons are subject to these conditions.

Some of these include: 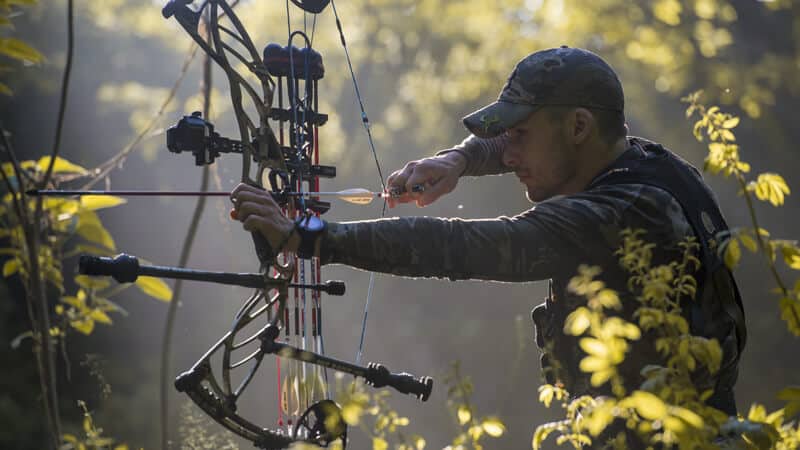 Other hunting restrictions must be considered by felons. Getting a hunting license differs from obtaining a firearm permit in most states. Hunting rules, like federal laws governing firearms and felons, vary by state.

Some states may prohibit convicts from hunting. Massachusetts and Rhode Island, for example. Most of the time, it would be determined by the felony committed.

Getting a hunting license isn’t the end of the road. There could also be other hunting limitations and state laws where separate hunting seasons are in place across several states.

In certain states, you can also find a distinction between gun and bow hunting season, which helps prevent gun owners from shooting bow hunters by accident.

What Weapon Can a Felon Own?

their homes, but not in cars or in public. In addition, convicts who commit offenses that are related to acts of violence may not gain body armor, according to a separate charge.

Hunting as a felon is a tricky topic to discuss; owning a firearm is normally forbidden by federal law; however, depending on state laws, the season, and licenses, the use of a traditional bow or crossbow may be permitted even after a felony conviction or when you have gun rights restored.

The first question to answer is, “What is a bow?” Here, you can find more about the different bows – traditional, compound, and crossbow–before looking at a few examples of state laws governing the legal use of weapons for hunting. (Read High Paying Outdoor Jobs)

What is a Bow?

With the help of a string, a bow propels an arrow through the air, aiming it at its target. The traditional bow is powered by the user pulling or drawing back the string to create tension. Because of the lack of mechanical parts, this is the earliest type of weapon covered in this article.

Using cables and pulleys, the bow’s limbs are bent before shooting an arrow, allowing the user to focus on aiming while increasing force. Unlike the traditional bow, they feature a mechanical component that makes them illegal for felons to own.

What is A Crossbow?

A crossbow uses a similar mechanism, and with its gun-like construction, it allows for high tension firing, easy aim, and mechanical reloading. They have been popular since their introduction because they are easier to use than traditional bows.

Some states allow them to be used during gun hunting season, but you should check just like you would for hunting in your area. 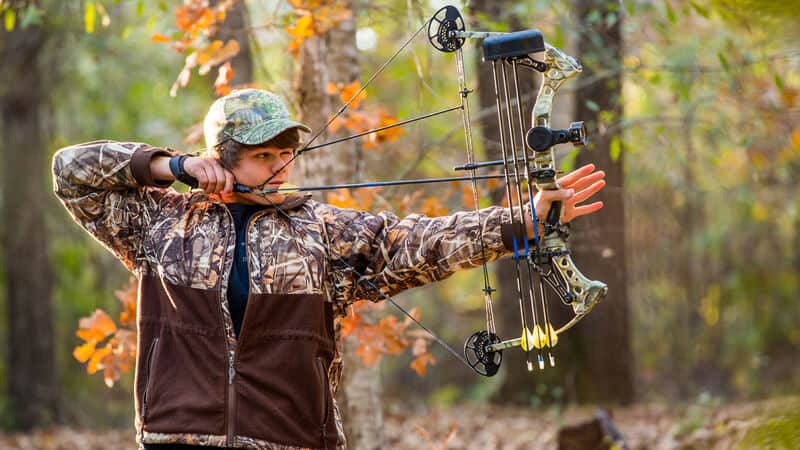 Can Felons Hunt With A Bow?

The ATF defines a firearm as “any weapon that will or ejects a projectile by the action of an explosive.” Of fact, this is the principal way a contemporary gun fires bullets or rounds, but it excludes many guns that we may consider hunting weapons.

Because bows and crossbows do not employ explosives, by law, they are not considered firearms. According to the 1968 Gun Control Act, felons can use bows, including compound bows and crossbows, without fear of violating other gun restrictions (a Class 6 felony).

Several states have agreed. Because it is not a firearm, it is vital to check state rules and legal restrictions before purchasing one expressly for hunting after leaving prison.

According to Mississippi Code Annotated Section 97-37-5, which covers muzzle-loading rifles and muzzleloading shotguns, which felons are prohibited from using, but not bows or crossbows, individuals can hunt with traditional bow and arrows or crossbows if they did not break the law in 2004.

In Wisconsin, hunting with a bow is permissible if you haven’t lost your hunting privileges and have a valid archery season permit. It is also permissible to hunt with a crossbow during the gun (deer) season, but you should consult legal help first.

In California, convicted felons may hunt with bows and crossbows when it is legal. Because the Penal Code only criminalizes the possession of a firearm or ammunition, all archery equipment is allowed. Before making any purchases, consult a local legal authority such as a parole officer or lawyer.

Even though the 1968 Gun Control Act is not violated by the use of a crossbow, it is illegal for a felon to own, use, or carry a weapon such as a crossbow in Colorado.

A convicted offender should never own a weapon like a crossbow unless they want to face jail time or huge fines.

Hunting is out of the question. For those who want to hunt in Colorado but are afraid of getting caught with a firearm, there is no way to do so, even with the right license.

This means that in Idaho, hunting with a compound bow or a crossbow or any weapon that forest by mechanical means is unlawful unless their gun ownership rights are restored.

Hunting with a conventional bow may be possible. This is a vital topic to remember since potential hunters must examine their local laws and regulations to avoid re-conviction. A hunting license might be refused or canceled owing to violations or repeated offenses.

A convicted felon must be informed of the laws in their state and get a hunting license before hunting with a bow or crossbow. As illustrated by federal law, some states allow and even encourage offenders to hunt with a bow, compound bow, or crossbow.

Before buying a weapon, pay attention to all the legal paperwork, and show why you have it and what you plan to do with it.

If you live in a state with stricter gun laws, it is incredibly important to seek legal advice from a lawyer prior to purchasing any of the weapons listed above. With a felony conviction, you may not own or even be near firearms or be around crossbows, as it can easily be a parole violation even if target shooting.

You do not need a background check to purchase archery equipment. Unlike ammunition, you can fire an arrow countless time before you need to replace it.

As a felon, you are aware of the loss of civil rights guaranteed by the US Constitution. The 1968 Gun Control Act forbids convicts from owning any form of a firearm. Violation of this law is a Class 6 felony and an immediate parole violation.

The Bureau of Alcohol, Tobacco, and Firearms must restore these privileges. They’ll decide if you can have your gun rights restored.

Buying, owning, and shooting a compound bow is allowed for felons and non-felons alike.

Compound bows are commonly used for target shooting and hunting. Oregon is the only state where compound bows are only forbidden for hunting, even for individuals without a felony conviction. 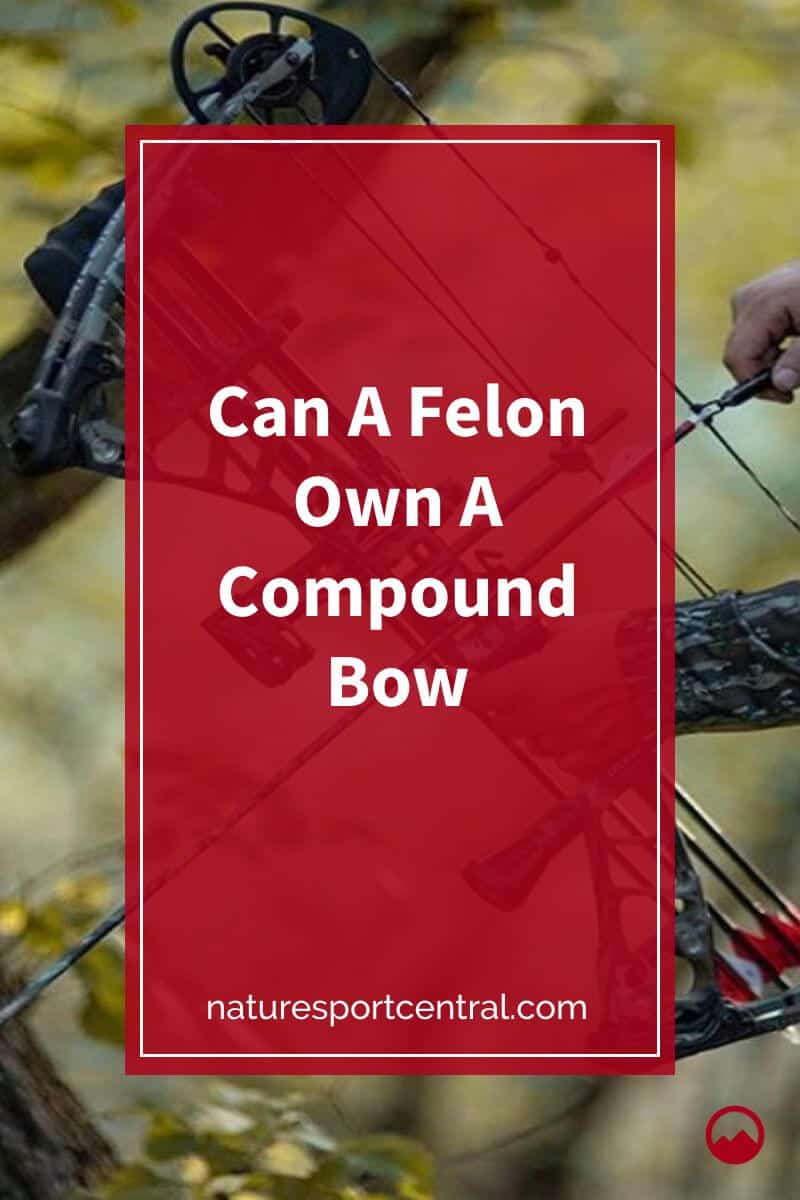