Known as the famous Kayak which has traveled the whole length of the Amazon River two times, the Sevylor Tahiti inflatable boat is a classic kayak that is both affordable ( approx $140) and heavy duty (400 lbs. weight capacity i.e. two people).

It was originally released in 1963 and the build hasn’t changed all that much since. This vessel is made out of tough 26 gauge polyvinyl-chloride and sports dual air chambers to provide additional security.

What is so good about Sevylor Kayaks?

The I-beam construction of the floor enhances its stability. Because of the custom made inflatable seats with back supports, this craft is exceptionally comfortable.

Just like any other Sevylor kayak, it also has the proprietary Airtight mechanism which guarantees that there won’t be a leak. An optional directional skeg can be installed for better tracking, and the boat also has a couple of spray covers to protect your gear.

It also packs a repair kit so you can fix it on the go.

Measuring in at 10’7’’ x 2’7’’ and being extremely lightweight, this NMMA certified vessel, can easily be handled by one person. 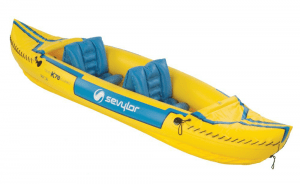 This kayak can in no way be compared to standard sea touring kayaks. It is considerably slower and doesn’t track as well either.

It’s very low cost is its only saving grace which can make it a reasonable purchase for someone who is starting out in kayaking or won’t take it out for anything more than some lazy lake exploration.