Many people ask, “What does bear meat taste like?” Well, as with any question like this, you’ll get a wide range of answers. However, people commonly compare black bear meat to beef, deer (venison), elk, and other game meats.

One thing that’s interesting and specific to bear meat is that when black bear hunting, you’ll find the flavor change throughout the season.

Because bears hibernate, they have virtually no fat on them in the spring. Therefore, what little food a spring bear will be eating in the early season is mainly plant-based. This lends itself to much leaner, milder meat.

Bears have built up a substantial coating of fat for their impending hibernation in the fall, so the flesh is fattier, with layers and marbling throughout. A fall bear’s flavor is also distinct. If they’ve been eating blueberries, their meat will be delicious. 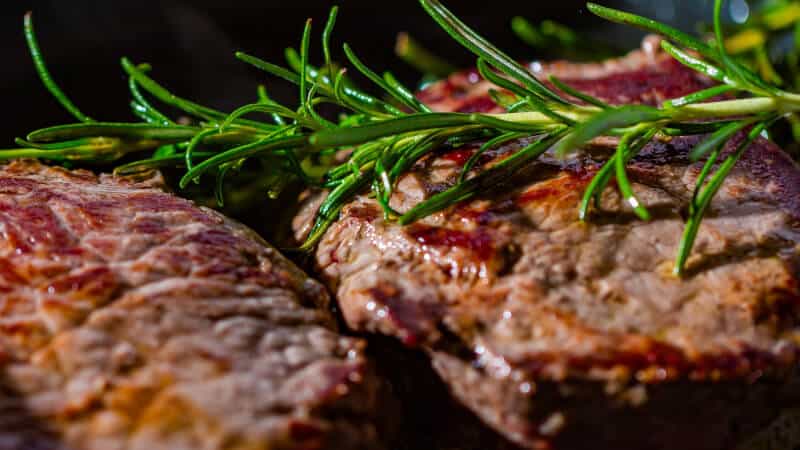 However, if the bears have been scavenging dead carcasses and eating fish, the scent and flavor are pungent, and they could have an unpleasant flavor.

Black Bears’ meat is dark and borderline purplish-black. But, in appearance, it isn’t unlike caribou, moose, and other wild game you may eat. (Read Famous Cartoon Bears)

However, it does come with a coarser consistency, which might be comparable to domestic pork.

In our guide, you can learn more about what does bear meat tastes like when cooked. By the end, you can find some hints of popular bear recipes, so you don’t end up with a thick layer of shoe leather rather than a juicy bear roast.

There is just one rule for preparing bear meat, and that is to cook it slowly! Cooking bear meat, whether stewing, grilling, or having a bear pot roast, don’t rush it for a couple of reasons.

Depending on their nutrition, bears can spread illnesses. So, to destroy the potential trichinella, cook it for a long time at a temperature of around 160 degrees.

The bear meat taste can be an acquired taste, and even if you enjoy fat on domestic pork, you need to remove all the fat before cooking and eating bear as it can change the flavor of your dish.

If the meat feels tough, you can grind it to make it easier to eat bear.

On top of this, bear meat degrades quickly, unlike other animals, so ensure you don’t hang it the same way you would hang deer (venison), elk, or other game meats after a kill.

Because of the amount of meat you can have after successful bear hunting, store it in your freezer once you’ve slaughtered and cleaned the game meat. You can whip out a slab of meat for a bear steak that is nice and tender when cooked right. (Read What Does Red Snapper Taste Like) 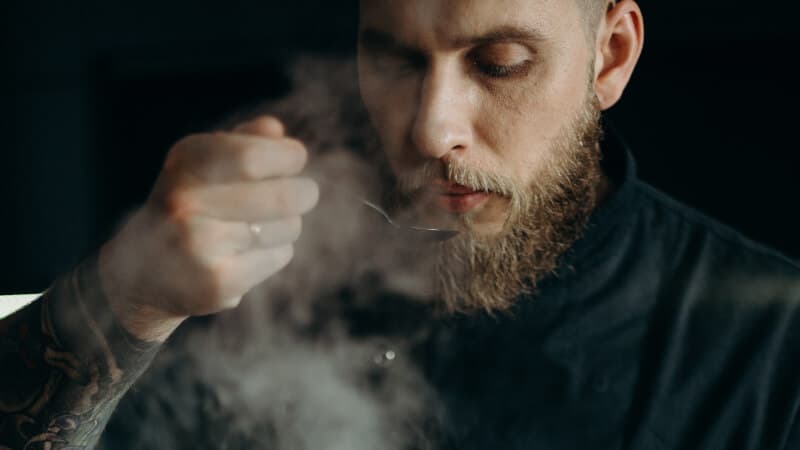 The black bear is one of the most popular bears to hunt and eat, and you could ask what bear taste like? Many hunters shoot them, and you may not wonder what they do with them afterward.

Bear meat tastes distinct as it has unique flavors and textures according to the time of year and what food is available to add to their diet.

It is like venison when you cook bear meat, although usually a touch sweeter than some game meat.

It has a texture similar to pork and other white meat, yet the flesh has a somewhat coarser grain because it is wild game, and thus to cook bear meat, you have to anticipate this.

Bear meat is classified as red meat and has a fibrous texture comparable to beef but with a bit more chew than beef.

With different bear hunting seasons and when the bear is caught, the flavor of the meat might vary. For example, eating bear in the early spring, right after hibernation, the black bear taste will differ as the meat is thinner and softer in flavor.

The bear’s age might also influence its flavor and texture. For example, the meat will be softer and milder as the bear gets younger, and vice versa.

If the bear is caught in the fall, it has several months to prepare for hibernation by coating itself in fat. It has also spent the summer consuming various foods, including fish, carrion, and other prey.

A bear who has eaten a lot of fish will have meat that tastes like fish. Many hunters advise against eating bears that have been proven to live on a fish-heavy diet since the meat is bland regardless of diet.

A bear taken in the fat will have a richer flavor profile, even if it has been eating blueberries and corn. The fat cap will need to be removed; however, there will still be plenty of marbling throughout the meat.

How To Process And Store Bear Meat

If you are a hunter or buying meat from a hunter, check the bear processed correctly to find out what does bear taste like at this point, will depend on how it has been cared for.

If the flesh was not correctly handled and preserved after it was caught, it would be tough and have an awful flavor that no cooking procedure can overcome it to make the bear meat taste good.

When hunting, there will be a window of around 12-24 hours to process the meat and get it into the freezer before it spoils, depending on the area’s temperature.

The fat on bear meat can rot and go rancid quickly, unlike other meats hung to age. This deterioration taints the flavor of the meat. As a result, the bear must be field-dressed and frozen as quickly as possible.

In most cases, the meat will last three months in the freezer. However, some bear meat experts recommend defrosting the flesh for a week before eating it to allow the tastes to develop and deepen.

How To Use Bear Meat In The Kitchen

In terms of protein, a bear is on the level with beef, but when it comes to other game meats like deer, boar, rabbit, and duck, the bear comes out on top.

Depending on the cut, hardness, and personal preference, bear meat can be prepared in various ways.

To avoid disease, bear meat must be cooked to an internal temperature of 160°F due to the likelihood of Trichinella spiralis and T. Murrelli.

Because it is a little harder yet packed with taste, the chuck from the bear’s neck is the ideal meat to use for grinding. If you want to soften the flavor of the meat, marinate it overnight in milk, buttermilk, or yogurt.

Roasting your bear meat is one of the most delicious ways to prepare it. Because it doesn’t always have the nicest flavor, get rid of all the excessive fat. Roast it low and slow with ingredients like garlic, thyme, and balsamic vinegar for a delicious roast.

Grind your bear meat and combine it with a bit of ground pork or beef to produce a juicy and flavorful burger. (Read Best Hunting Shows On Netflix)

For a sumptuous, finger-licking excellent supper, slow roast and then grill the ribs (particularly the short ribs).

Cook some tougher meats in a tasty stew with root vegetables and herbs on low and slow heat.

To create bear burritos or bear tacos, grind your bear meat and season it with taco seasoning. Then, to tenderize the meat and diminish the richness of the flavor, squeeze some lime juice on top. 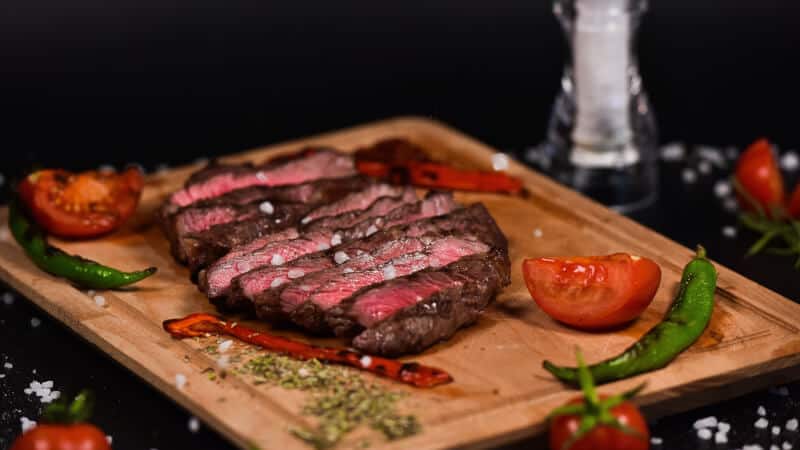 Did you know that the flavor of bear meat differs depending on the bear? This is primarily because their food, like wild boar, varies by region.

The flavor of black bear is comparable to that of venison. It is, however, a lot sweeter.

The meat of younger bears has a softer flavor than that of older bears. Bear meat can also be classified according to its season.

Spring bears eat new vegetation. As a result, their meat is soft. Bears have thicker layers of fat in the fall, and their flesh is rougher and harder.

Most people believe that bear meat is greasy. Given the layers of fat that an enormous bear can have, this is accurate to some extent.

Bear meat is also compared to beef by some hunters. However, the flavor is much stronger than beef. (Read 7 Best Survival Shows On Netflix)

Beef fats also contribute to the flavor of the meat. With game meat, however, the fat imparts a disagreeable flavor. As a result, it’s advisable to take them out before cooking. 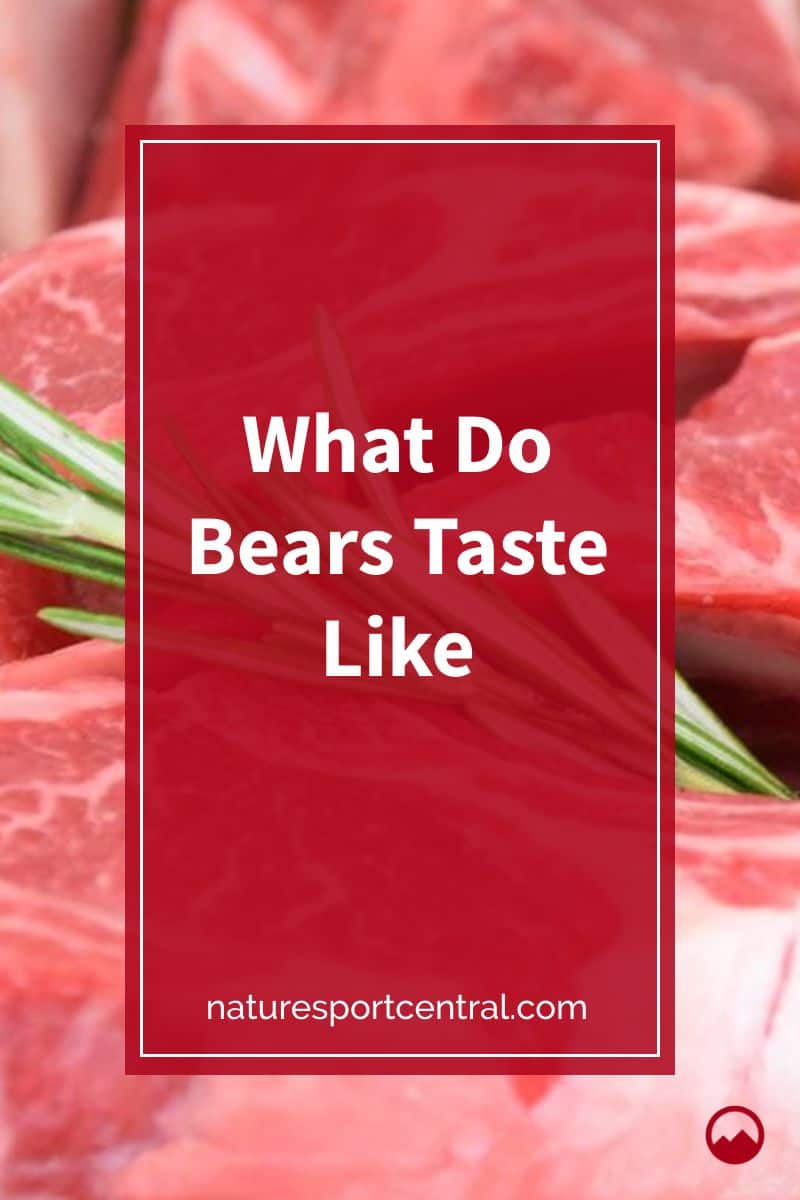