When camping or enjoying the great outdoors, campers and other outdoor enthusiasts use coolers to keep their drinks and food cold.

And for coolers, no one does it like YETI. YETI coolers have become an iconic brand and a sign of outstanding quality in the short time since its inception.

Yeti was formed in 2006 by two brothers from Austin, Texas, born and raised there.

Roy and Ryan Seiders, keen outdoor enthusiasts, were dissatisfied with their purchased coolers. They wanted something sturdy that could stand on their boat’s fishing platform. They also wanted the ice to last longer than it usually would in a cooler. 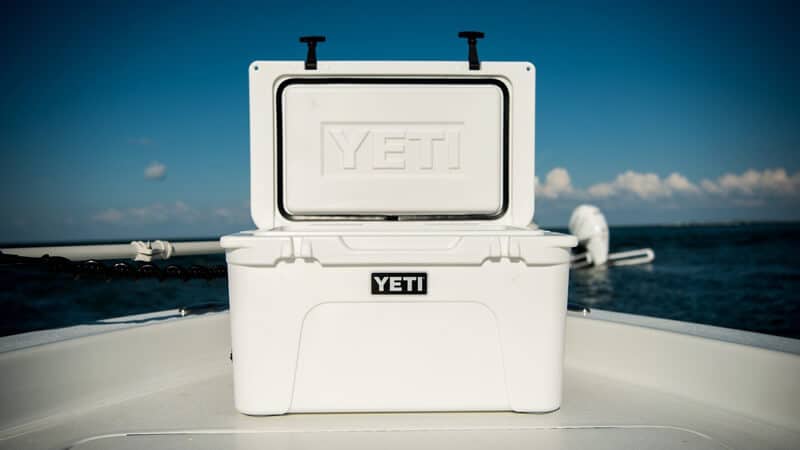 The Seiders brothers designed their high-end cooler after failing to find a product that met their requirements.

The original Yeti cooler, like today’s models, retails for $200 or more. Despite the exorbitant price, purchasers recognized the product’s high-quality construction and, more significantly, its exceptional ice retention, and it immediately became well known.

Today, the Yeti cooler is a must-have piece of gear for offshore anglers, hunters, hikers, and beachgoers. Yeti coolers are on the top end of the cooler spectrum, so you should expect to pay more than you would for other manufacturers.

In our guide, you can find why Yeti coolers cost so much compared to other cooler alternatives. By the end, you’ll see what goes into making the coolers so great and that the whopping warranty costs the manufacturer money.

You’ll have enough information to decide if you want to use the Rolls Royce of coolers like other outdoors people, or you can find yourself settling for second best for your outdoor lifestyle.

Is Yeti Worth The Extra Money?

Why are Yetis so expensive? It is always asked when you look around for a new cooler. You can find many areas used in the manufacturing and business model of the best cooler.

Yeti also won’t sell to big box stores and stick to small local stores. As a result, the Yeti brand and the Yeti lineup keep a high image, as an expensive mobile phone does compare to competing brands of regular coolers you find anywhere.

However, there is much more to Yeti than marketing, and when you want to keep things outdoors cool and safe, you’ll love these features. 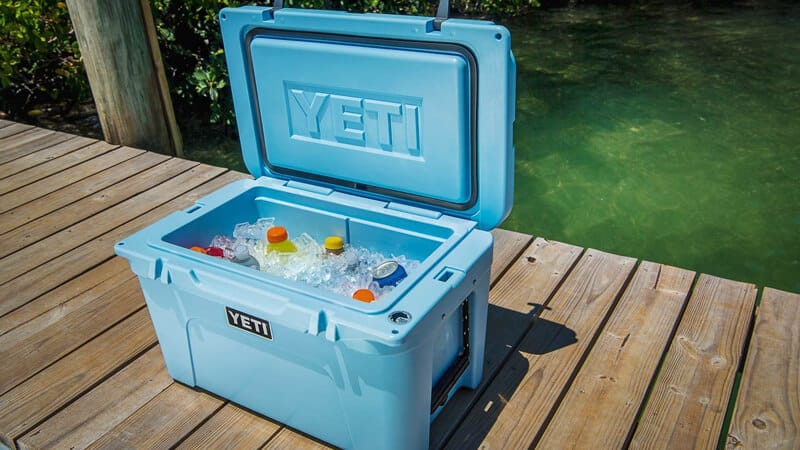 The higher ice retention capabilities of Yeti ice chests are the primary reason they are so pricey and why you would want to buy one. Yeti claims that their Tundra coolers should be able to keep ice for at least five days.

People claim to have tested a Yeti Tundra for up to ten days and found there was still ice remaining, which is something you can’t get from an average cooler. The Yeti coolers’ worth is shown when you can fill it with ice and food once per week rather than worrying it has all melted after a day or two.

You should, however, be aware that if you are an outdoor enthusiast, opening and closing your Yeti brand cooler will shorten the time of retaining ice.

The question of why is Yeti so expensive can be answered further by the amount of insulation used in the building of Yeti coolers to keep things cold.

Yeti coolers offer 3 inches of insulation around the base and on the lid to help keep whatever you put within it as cold as possible.

Normal coolers will typically have 1 or 2 inches of insulation, and it is possible the lid of the cooler may not have insulation. (Learn How To Refill Fresh Water Tank During Camping)

What Is So Great About Yeti Coolers?

You can find the same features in some models of cooler boxes, yet Yeti keeps going compared to other brands. Here are a few more things that make Yeti stand out, and why do Yeti coolers cost so much?

Made Not To Break

Because of their poor cooler experiences in the outdoors as children, brothers Ryan and Roy Seiders founded YETI.

The brothers noted that coolers available couldn’t stand up to their outdoor adventures. So, they built an extremely rugged cooler that was more durable than regular coolers.

As a result, they set out on a mission to create a cooler that would not only survive but thrive in the great outdoors. They spent years designing coolers with better construction, insulation, and security features than the Coleman and Igloo coolers we all grew up with.

Today, YETI has a worldwide following of adoring customers who swear by their coolers, but the brand is more than just an excellent narrative and a fervent fan base. They back it up with higher quality merchandise.

YETI’s phenomenal expansion over the last decade would not have been possible without it. In addition, if you have any doubts about durability, their hard coolers come with a five-year warranty, which makes Yeti coolers the most durable cooler on the planet.

Yetis use a manufacturing process called roto-molding. This pressure-injected process involves using a high temperature and low pressure to create a box out of a single hollow plastic shell.

After this, it is pumped full of commercial-grade polyurethane foam.

You can find this in many Yeti alternatives, yet Yeti pioneered the process. When Roy and Ryan Seiders, the brothers behind Yeti, sold their first box market back in 2006, everyone was used to cool boxes falling apart in their hands after one or two uses.

Nowadays, most coolers use the same roto-molding technique. But Yeti has so many factors in their favor and reasons why the coolers are so expensive.

The YETI Tundra 45 appears essential from afar; however, up close, you can see and feel the value of the high price tag cooler. A closer study reveals double-thick walls, a freezer-level seal that stops cold from escaping, and commercial-grade insulation that keeps ice intact for days.

The YETI’s patented technology can be seen in many areas:

The Yeti cooler’s strong seal is one of its outstanding features. But unfortunately, accidents happened, so we had no choice but to clean up our cooler after it flipped over and spilled all of its contents on the ground.

Yeti Coolers make use of unique heavy-duty rubber latches. As a result, they’re not only robust enough to keep your food and drinks safe inside, but they’re also tough enough to withstand a bear attack. (Read Do I Need To Ground My Generator When Camping) 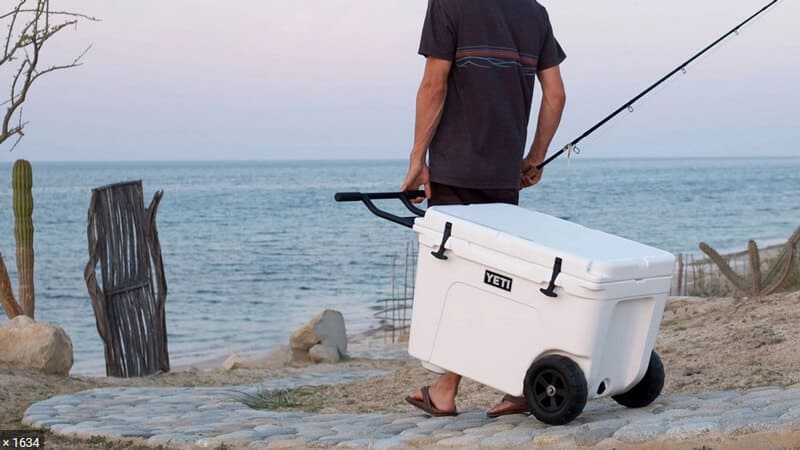 Yeti made a massive statement with their roto molding technology and decided not to sell to stores like Walmart.

They delivered an over-engineered cooler with a thin margin of profit, yet they did a better job of construction and marketing, which was good news to the retailers stocking the coolers.

Yeti gave away stickers and caps with purchase, so it was free advertising as stickers showed up on bumpers, and more than a few people got to know the brand.

Why shouldn’t you buy a Yeti?

Consider different cooler brands before settling on a Yeti.

A regular cooler can do for a weekend camping trip but invest in a premium cooler if you require ice for more than a few days. A softshell cooler is usually lighter than a premium or standard cooler but does not have the same ice holding capabilities.

Pelican, Grizzly, and Orca are all Yeti cooler alternatives. These brands’ coolers will be similar in build to Yeti coolers but less expensive, and some can still hold ice for a couple of days without needing to be refilled.

RTIC is another Yeti cooler competitor, offering items that are similar in build but cost less. The RTIC 45, like the Yeti Tundra 45, can contain 36 cans of beer or 40 pounds of ice. RTIC claims the RTIC 45 can retain ice for ten days. Buti Tundra 45, RTIC 45, RTIC 45

Indeed, RTIC coolers are made to look quite similar to Yeti coolers, and Yeti sued RTIC for copying their design. RTIC coolers resemble Yeti coolers in appearance, locks, and features but are substantially less expensive.

In contrast, Yeti coolers are built in the USA and the Philippines. In addition, RTIC coolers come with a lifetime warranty against faults in materials and workmanship.

Grizzly is another rotomolded cooler-maker that creates coolers identical to Yeti coolers. It costs more than an RTIC cooler, but not as much as a comparable Yeti cooler. Most other coolers do not have a center divider, which can be beneficial if you need to split items inside your cooler.