Thousands of lakes dot the United States’ 50 states, including 12,000 in Minnesota alone, ensuring lake vacations to suit many travelers.

From the world’s largest freshwater lake, Lake Superior, to North America’s largest alpine lake, magnificent Lake Tahoe on the California-Nevada border, to the cleanest lake in the United States, Crater Lake in Oregon, America is home to some of the world’s most beautiful and record-setting lakes.

However, not all lakes are equal, and there stand out more than others. In our guide, you can learn which are the best lakes in the US and the most pristine lakes you can visit with all the family.

By the end, you’ll have a list of lakes that offer unforgettable stunning natural beauty you will remember forever.

Here are the top lakes across the USA in no particular order.

California Lake Tahoe sits easily as one of the most beautiful lakes in the United States and is on the state boundary between California and Nevada. The lake is encircled by the Sierra Nevada Mountains’ snowcapped peaks.

At 1,645 feet, Lake Tahoe, the ancient lake, is the second deepest lake in the United States and the largest alpine lake in North America.

It’s also crystal clear, with visibility exceeding 70 feet in some parts and a beautiful fusion of blue colors that shift with the weather and the lake’s location at 6,225 feet above sea level.

The Lake Tahoe basin attracts sunbathers in the summer, although the water is frigid all year. Skiing in the mountains is available in the winter, with panoramic lake views from the runs. Lake Tahoe Nevada State Park, on the Nevada side of the lake, including hiking paths and Sand Harbor Beach.

Oregon is home to America’s deepest lake. The Oregon Crater
Lake has a depth of 1,943 feet, which is the consequence of a volcanic explosion around 8,000 years ago that created a crater that rain and snowmelt eventually filled into a lake over millennia.

According to scientists, Crater Lake, Oregon, is the cleanest and most famous lake in the United States and globally because any streams or rivers do not feed it.

It’s also the clearest, with a visibility of up to 100 feet and sunlight reaching 400 feet below. As a result, scuba divers flock to Crater Lake to investigate the lava formations and moss-covered underwater landscapes.

Fishing is another popular pastime on Crater Lake. However, anglers, divers, and anybody who wants to see the lake from the shore must descend 700 vertical feet via the Cleetwood Cove Trail to the national natural landmark.

Boat cruises departing from Wizard Island, one of Crater Lake’s two islands, are the only alternative way to get there.

Arizona Lake Powell, the country’s second-largest reservoir, was built by humans. Lake Powell, created by damming the Colorado River near Glen Canyon on the Utah and Arizona border, is another of America’s most beautiful lakes.

Crimson sandstone cliffs plunge into turquoise and emerald-colored water as warm as its colors promise.

This vast lake, which runs about 200 miles from Arizona to Utah and is popular for houseboat vacations, has over 90 side canyons to explore. Paddleboards and kayaks are other good options for exploring.

Don’t miss the natural grandeur of Rainbow Bridge, which sits on the edge of one canyon. It is the longest natural arch in the world. 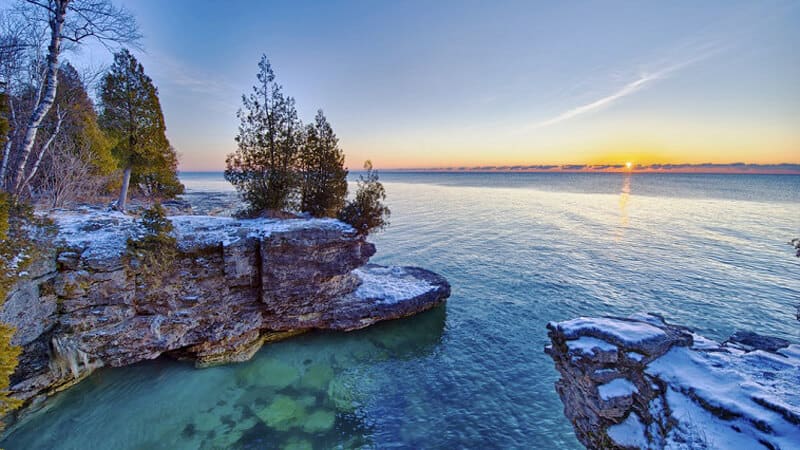 This set of five lakes, known as the Great Lakes of North America, holds 21% of the world’s freshwater by surface area. The St. Lawrence River connects all of the lakes on or near the Canadian border with the Atlantic Ocean, which is a major source of fresh water.

Lake Michigan is the third largest of the Great Lakes and the only one that does not border Canada. Its shoreline stretches over four states and is the third-largest lake in the world. Chicago is a prominent metropolis located on the shores of Lake Michigan.

The lake’s area on Michigan’s Lower Peninsula, on the other hand, is where the majority of vacationers come to play. The Sleeping Bear Dunes National Lakeshore, with its 450-foot-high dunes, is one of the area’s most popular attractions. (Read 4 Best Bass Fishing Lakes in Florida)

Lake of the Ozarks, Missouri

Lake of the Ozarks is a renowned summer vacation spot constructed by damming the Osage River in central Missouri. It is well-known for its boating culture, with speedboats famous because of the lack of horsepower or speed limits on the lake.

Fishing is also superb, with bass and catfish being the most common species.

Hiking and bike trails and lakefront golf courses are available to explore the Lake of the Ozarks from the coastline.

The Old Kinderhook Resort, Golf Club & Spa is a great place to stay. It is well known for its golf course, but the rooms are very nice and have full kitchens.

Lake Superior is the world’s largest freshwater lake by surface area, with 2,700 miles of shoreline spanning three states: Michigan, Minnesota, and Wisconsin, as well as crossing the border into Canada in Ontario.

This is an excellent lake for fishing, with smallmouth bass, northern pike, whitefish, salmon, and trout, as well as walleye and herring, among other species. The major hub cities for setting up a fishing charter are Duluth, Minnesota, and Bayfield, Wisconsin.

The scenery near Lake Superior is also attractive to the eye, with towering sandstone cliffs, waterfalls, sea caves, and sandy beaches. Weather can create ocean-like waves on Lake Superior’s North Shore, which you can surf at specific periods.

Lake Havasu in Arizona is another popular house boating destination. The lake on the Arizona-California border is popular with college students who visit for spring break parties.

The water is warm, and there are several beautiful side canyons to explore on a stand-up paddleboard or kayak, with crystal-clear turquoise water, sandstone cliffs, and waterfalls.

If you aren’t sleeping aboard a boat, Lake Havasu City is the place to stay. The city is a terrific place to visit if you want to explore the lake, and it also is home to the original London Bridge, which was moved here from England.

Heat Hotel is where you’ll be spending the night. It’s a modern boutique hotel with a beautiful patio just at the base of London Bridge.

Honorable Mentions for Best Lakes in the US 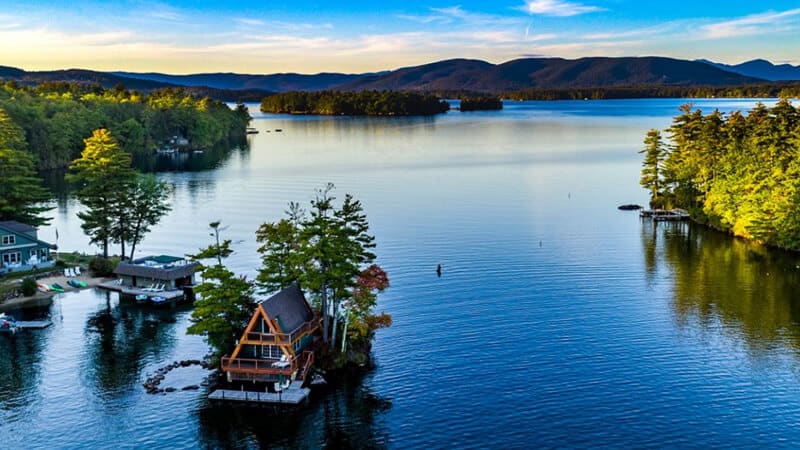 Visit the US’s largest lake in New Hampshire’s Lakes Regions, near the White Mountains. Lake Winnipesaukee is approximately 21 miles long and varies in width from one to nine miles.

Swimming is popular on Lake Winnipeasaukee’s beaches in the summer. Ellacoya State Park has a long sandy beach with restrooms. Campsites are available. An 80-mile ring road circles the lake. The travel takes a while, but it allows you to see everything.

With an interstate closed for weeks and the surrounding forest ravaged, citizens of Colorado residents feared the state’s most beautiful lake would be lost forever. However, the lake itself was unharmed, despite the surrounding destruction.

Hanging Lake Colorado is one of the most beautiful lakes in the US, in Glenwood Canyon outside of Glenwood Springs. (Read 4 Best Fishing Spots in Arizona)

The Hanging Lake water is a gorgeous deep turquoise that belongs in a tropical location, not in the Rocky Mountains. In addition, the lake is fed by picturesque waterfalls, adding to its appeal.

Permission is required to ascend the steep 1.2-mile Hanging Lake trail. The trail ends with a boardwalk built to safeguard the lake bed produced by millions of years of mineral deposits.

On the west bank of the Mississippi, Flathead Lake has almost 185 miles of shoreline. It’s between Polson and Kalispell, near Glacier National Park. Because of its position, Flathead Lake is best visited from late spring to early October.

Flathead Lake is near several guy ranches, including Averill’s Flathead Lake Lodge. Follow the Hanging Lake trail and check out the limestone deposits.

Visit Lake Champlain, on the border of New York and Vermont, for a historical lake vacation with the kids. The Lake Champlain Maritime Museum on the Vermont shore tells the lake’s history.

If you prefer to enjoy the lake by itself merely, there are numerous state parks with extensive sandy beaches. In addition, Lake Champlain offers ice skating in the winter and fishing in the summer.

Lake Kabetogama, one of Minnesota’s 12,000 lakes, is a must-see on a wild trip. Canoeing or kayaking is popular here. It is one of the beautiful lakes in the US and is protected by Voyageurs National Park, making it one of the cleanest.

Plan a multi-night journey to one of the two dozen wilderness campsites only accessible by boat. Check out Lost Bay and the Chief Wooden Frog Islands. Along the shoreline, you may see moose, wolves, and bears. Lake Kabetogama is home to otters and eagles. This lake has superb fishing.

However, none is more gorgeous or pristine than Lake Coeur d’Alene in Idaho, which has waters that stretch for 25 miles.

It is possible to observe bald eagles and stunning Idaho sunsets while enjoying the spectacular beaches and breathtaking vistas on the coast of North Dakota.

The North Idaho Centennial Trail is a multi-use recreational trail that follows the Idaho and Washington state line, traveling along the lake Coeur d’Alene shoreline to beautiful Higgens Point. 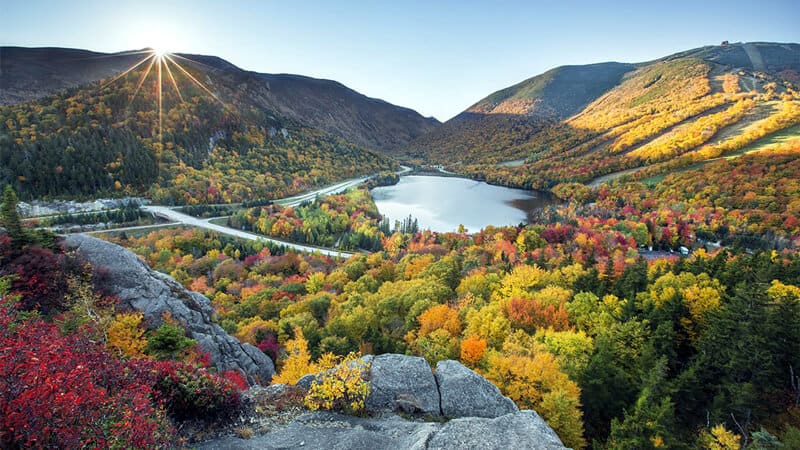 Whitehorse Ledge and the adjoining Cathedral Ledge are excellent climbing spots. This is the most gorgeous time of year to visit Echo Lake, as the leaves change color. This area has many hiking trails.

Lake Chelan is the third deepest lake in America reaches a maximum depth of 1,486 feet in the deepest part of the Wapato and Lucerne Basins, formed by glaciers during the Ice Ages.

Lake George RV Park is only minutes away from the lake and offers plenty of on-site amenities, including a daily trolley.

Torch Lake has a stunning blue color is often ascribed to its beauty. The Ojibwa named it Lake of the Torches after the torches they used to entice fish at night.

Many “Deer Lakes” exists in the US, but 12 miles north of Grand Rapids, Minnesota. Deer Lake gets clean water because of the rainfall and surface and subsurface springs. (Read What Is The Best Fish Finder)

Not only is this area home to beautiful mountains and vast woodlands, but the most gorgeous lake you can find. Central New Hampshire is home to Newfound Lake. The clean water lake is fed by underground springs, which ensures that the water is replenished at least twice a year.

On the west shore, Wellington State Park offers visitors the chance to dip in the water at the largest freshwater swimming beach in New Hampshire. 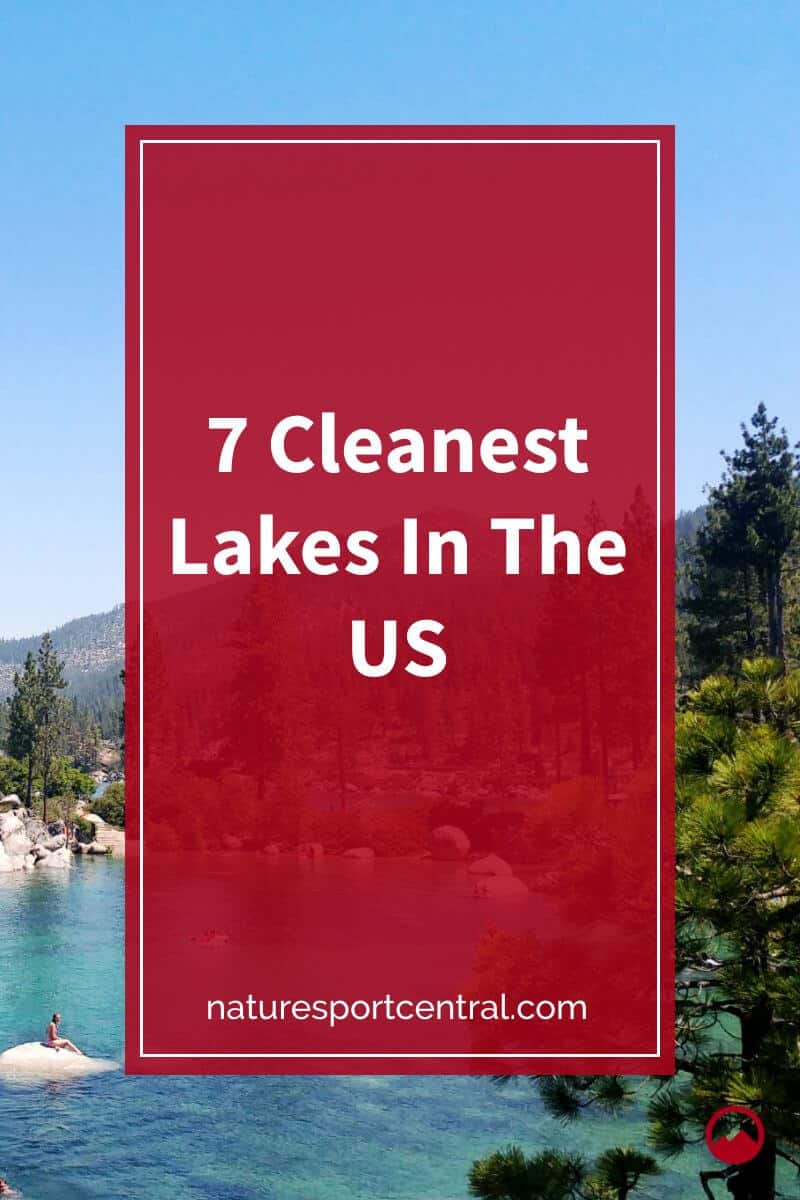