Salmon and trout have subtle differences, but they also have some similarities. Two fish types are commonly confused by people, and these are the Salmon family and Steelhead Trout.

In actuality, while having a nearly identical mild flavor and being closely related, the two are distinct. A steelhead fish is not a salmon, to start with. Although wholly distinct from salmon, steelheads are a type of trout belonging to the same family of fish.

In our guide, you can learn what are steelhead fish and what the main difference is compared to salmon. 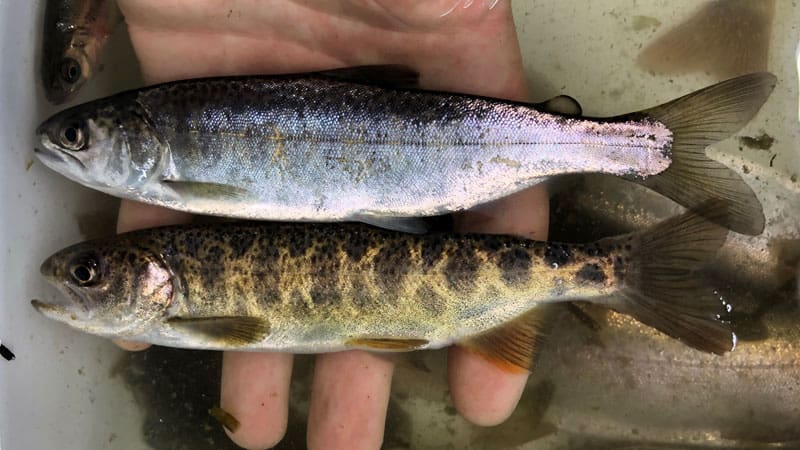 What is a Steelhead Trout?

The steelhead is an anadromous variety of rainbow trout because they are essentially the same fish. It can be found in freshwater streams that flow into the Pacific Ocean and is a member of the salmonid family. Because it travels between freshwater and marine environments to breed, it is referred to as anadromous.

Compared to salmon, steelheads can live up to eight years longer. In addition, they can spawn up to three times, although most of them, especially the males, do not live very long.

The fish’s appearance inspired the term “steelhead.” However, the morphology of adults is often more streamlined, with a silvery or brassy color.

What is a Salmon?

Many species of ray-finned fish in the Salmonidae family go by the common name “salmon.” Char, trout, whitefish, and grayling are more members of the family. Salmon are indigenous to the torrents that flow into the Atlantic and Pacific oceans in the north.

Salmons are anadromous as well. In most cases, they are born in freshwater, migrate to the ocean, and then return to the freshwater area to reproduce.

A salmon’s real hue can range from bright orange to nearly white. The color variations are caused by the amount of the carotenoid astaxanthin, which is regulated by how nutrient-dense the fish’s diet is.

The eggs of salmon come in a variety of hues. From deep reddish-orange to light yellow-orange, they are available. Both within and within species, the hues change. Sediment composition, water temperature, and age are a few variables affecting the color variations.

What Is The Difference Between Salmon and Trout?

If you’re out fishing and a curious onlooker asks you want you have caught, then knowing the difference between steelhead trout and salmon fish will help.

Oncorhynchus mykiss is the scientific name for steelhead trout and has a body extensively speckled with dark olive color. Sometimes, they can have pink stripes running up the sides of their bodies. (Learn What Do Shrimp Eat)

Steelhead trout live for around 11 years and weigh 8 to 11 pounds. Female steelhead trout work to their birthplace for spawning during the spring, although they can do this between May and October, the summer, or from November to April across the winter.

Salmon is not only one type of fish; it is an anadromous fish from the family or group of fish that belong to the same species.

Most of them are anadromous and move from the ocean up river to spawn. Salmon are born as freshwater fish before they migrate to the ocean and then return to the river of origin to breed.

While many differences fall to how you fish for them, there are differences in the baked salmon taste compared to that of trout.

For many, it doesn’t matter how you look at steelhead vs. salmon; wild salmon always comes on top as the favored fish meat to eat. However, even farm-caught salmon reign supreme, as these have many health benefits, such as being packed with Omega 3.

Here are the common species of both salmon and trout. You’ll see that when you cook salmon and freshwater trout, they are and how people compare them to food. However, both types are classed as oily fish and contain many health benefits. 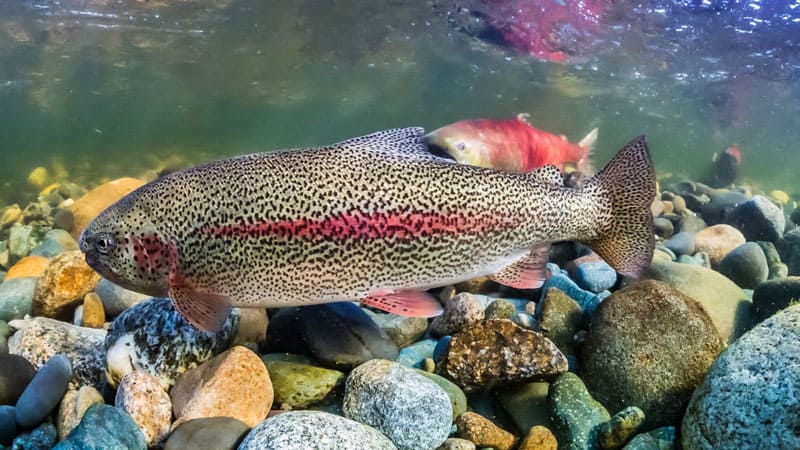 The most common type of trout sold in North America is the rainbow trout. The meat is pinkish and has a delicate and mild flavor.

The size is frequently perfect for one person and one fish. It’s not common for rainbow trout to taste “fishy.” Rainbow trout is a freshwater fish, and rainbow trout spend most of their life in fresh water rivers.

Although they have a different flavor, this is rainbow trout that lives in the ocean. A Steelhead trout has a fresh flavor without the muddy taste of a Rainbow trout, thanks to life in the ocean and a varied diet. The meat tends to resemble salmon in color and fat content more frequently.

You can now find many prefer steelhead trout vs. freshly caught salmon; Steelhead trout don’t have the fish taste like salmon fillets.

The fish is excellent and has a softer flavor than other salmon and less saturated fat.

Look At The Difference Between Steelhead And Salmon

Steelheads and salmon belong to the Salmonidae fish family; however, they differ in the following ways:

The steelhead is a species of trout, even though the Pacific salmon types and the steelhead belong to the same family (Salmonidae) and genus (Oncorhynchus), making them both salmonids.

To be more precise, steelheads are the sea-run variation of rainbow trout (Oncorhynchus mykiss).

They are, therefore, two entirely different species of fish while sharing a tight genetic relationship.

When in the water, both steelhead and salmon frequently have an extremely brilliant chrome or silvery body hue together with a dark to black back, making it occasionally challenging to distinguish between the two.

They may also share a torpedo-like body shape, which would only muddle matters further. (Learn What Does Fish Poop Look Like) 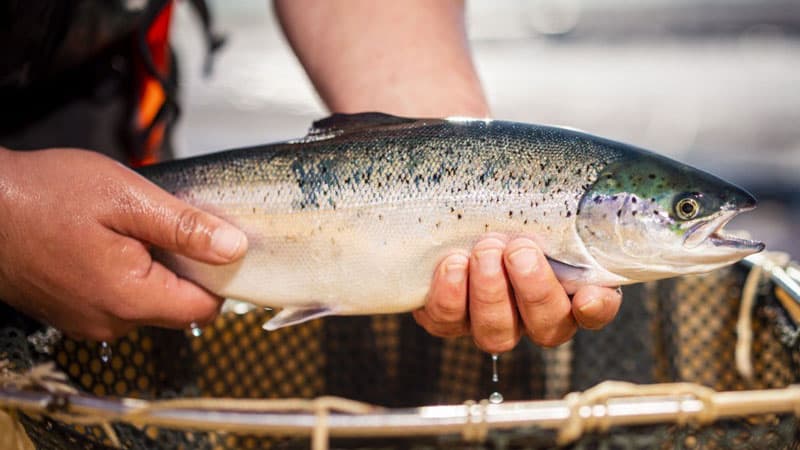 Salmon range in hue from bright orange to practically white, while steelhead is white, that is silvery or brassy. Steelhead has the stipes extending from the fish’s gill plates, making them look familiar to rainbow trout.

Whether the fish is anadromous (lives in salt water) or farmed, the meat of trout, including steelheads, is either dark red, pink, or bright orange-pink flesh. Salmon has a variety of meats, including white, gray, and red.

A steelhead has a rounder head than a salmon, which has a sharper one.

Examining steelhead vs. salmon on their gums and the interior of their mouths is another relatively secure method of differentiating them.

The gums of the five species of Pacific salmon are all dark or black, whereas the steelhead salmon are both white.

However, because their mouths and gums are similarly white, Atlantic salmon cannot be included in this.

Another clue that can assist in distinguishing salmon, steelhead trout, and others is the average length of these two fish species.

However, it’s not the most reliable of indicators because these fish’s sizes can fluctuate depending on their habitat!

The difference in body weight can also be made between a steelhead and a salmon in mature fish.

The bulk of these fish will only grow to a maximum weight of about 20 lbs, notwithstanding reports of enormous steelhead that have weighed 40 lbs.

Most salmon species can weigh considerably more. The two largest salmon species, Atlantic salmon and Pacific king salmon can grow to enormous types of 40 to 60 lbs. Even enormous salmon that weighed over 80 pounds have been reported.

Therefore, it’s incredibly likely that you have caught a salmon rather than a steelhead if you are fortunate enough to land a large fish that weighs more than 25 or 30 lbs.

Because salmon and steelhead are members of the same family of fish and spend a significant portion of their lives in saltwater, the taste of their respective meats is very comparable.

It’s safe to assume that either fish can have a flavor profile that’s hard to beat. Both dishes are considered to be the epitome of fine dining and may be seen on menus at restaurants all around the world.

In addition, steelhead and salmon may be cooked in a home kitchen with only a moderate amount of difficulty, and many delicious recipes are available online for each of these fish.

If you are considering consuming one of these options, you might find it helpful to be aware of the delicate flavor and flaky texture variations between them.

To begin, steelheads do not have the robustly fishy flavor characteristic of salmon. Instead, they have a flavor like a trout but are considerably more subdued.

To phrase it another way, it’s the culmination of a brilliant gastronomic union of salmon and trout.

Although wild steelhead sometimes has a somewhat stronger taste than farmed steelhead, this can be either a positive or a bad thing depending on your preferences in terms of how foods taste.

The texture of a steelhead trout is slightly different from that of a salmon, which brings us to our second point.

It’s hard to believe, but the steelhead fish has firmer meat that’s even more sensitive than the salmon. It also has lower fat content than salmon, so you can add olive oil to your baking dish without worry. (Read Can You Eat Bass)

If it is properly prepared, steelhead will practically dissolve in your mouth with a milder flavor no matter what cooking methods you use.

It is here that you find, what is steelhead fillet, and you’ll find you can swap from salmon, substitute steelhead, and get the best of this fish family for dinner. 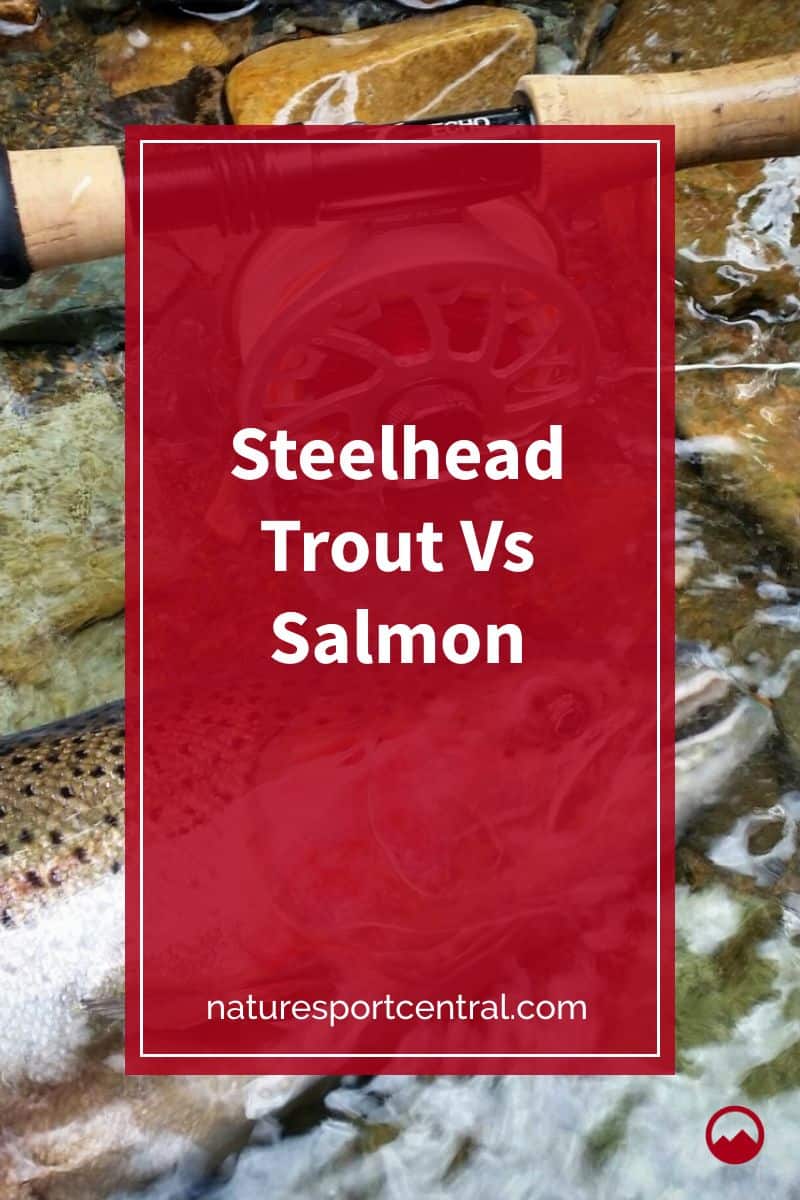