The bowfin amia calva, a freshwater fish, commonly known as the grinnell fish, is an old fish that has lived for many years. That there aren’t many similar fish in the family lineage, a gar would most likely be the closest related of any other species.

The fish are unique as they have a modified swim bladder and bowfin live in shallower bodies of water. When the water level drops due to extreme droughts, this bladder permits them to swallow air. During the bowfin spawn, the fins of these fish turn a beautiful aqua-marine color. As a result, their hue changes somewhat to resemble a parrot.

If you look closely at their mouths, you’ll notice the invasive species have many tiny teeth that would rip your hand apart. Nowadays, bowfin populations are increasing, and anglers are keen to tackle these popular gamefish and catch bowfins. In our guide, you can learn more about how you need to go about catching these fish, as regular fishing techniques may not yield you much luck. 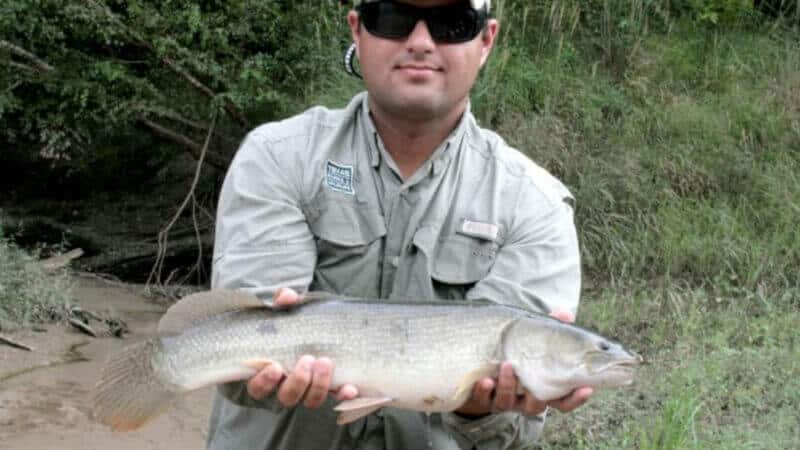 By the end, you’ll know all you need about hooking one and battling as if it were a dogfish; freshwater bowfin is a challenge and offers a fishing experience like no other. (Learn What Does Fish Poop Look Like)

The bowfin fish (Amia calva) has coexisted with dinosaurs and are now found thriving in the backwaters of eastern North America.

It’s ugly, slimy, and hungry with a mouth full of razor teeth.

It’s a previously unknown freshwater species that has existed since primordial times.

It is the only living member of the Amiiformes order and belongs to the Amiidae family. It dates back to the Jurassic epoch. Many people refer to Bowfin fish as a “living fossil.”

Amiidae members were once found in saltwater and freshwater across North and South America, Asia, Europe, and Africa. However, their current range primarily includes the Eastern United States and Southern Canada.

You’ll find them in large numbers in the Mississippi River drainage basins, the Great Lakes, and many streams around the Gulf of Mexico’s Eastern coast.

Many anglers regard Bowfin fish as game fish and always put up a good fight.

They are easy to spot as the elongated bony sport fish has a long dorsal fin that extends over half the length of its back. In the bowfin, the top base of the tail fin has a black patch.

They have a large mouth, olive green body with a lighter belly. Males average 18 to 24 inches and females 30 inches. Bowfin weighs 1 to 5 pounds and can reach 19 pounds.

Bowfins, like gars, are bimodal breathers who swallow air and water. Their gills allow them to gulp air by exchanging gases in water. Small pneumatic conduits connecting from the foregut to the gas bladder will allow Bowfin to breathe air and retain buoyancy. Other fish use their gas bladders to float. (Read Can You Eat Bass)

Many sportsmen consider these fishes as trash fish because they eat the more desirable game fish.

Some of the prey they eat are small rodents and larvae. Adults are piscivorous but will eat dead or alive animals if they are available. This trash fish helps prevent overpopulation of food fishes and stunted game fish.

Anglers consider it a nuisance that harms the local game fish population by devouring young game fish and their prey.

Bowfins are nocturnal ambush predators that hunt in the shallows at night and can go months without feeding.

The male bowfin builds a nest in vegetated shallows. Biting off roots creates a clearing for the eggs. In the spring, two females often spawn at night in one nest.

The males defend the nests and inflate the eggs, which hatch in 8–10 days. Both the incubating eggs and the remaining fry in the nest after the eggs hatch are guarded by the male bowfin.

Many anglers refer to these fish as “junkyard dogs” because of their strong fighting abilities. A bowfin can grab your fresh bait and take off like a jet, using its long dorsal fin to steer it toward weedy cover.

After setting the hook, anglers should let the fish run for around 5-10 seconds. After hooking a bowfin, anglers should expect a fight; these fish will turn, twist, and jump once hooked.

Depending on their attitude, you need to excite the bowfin to encourage them to bite. It will help entice a bite if you dangle the bait loudly in front of the fish.

Bowfins have powerful jaws, sharp teeth, and muscular bodies. As a result, landing your catch could be difficult.

As a result, make sure you have a decent pair of fish hook removers and a fish gripper with you. Like northern pike and muskie, Bowfin has razor-sharp teeth that can easily slash through a braided line.

This needs a steel leader as the bowfins’ jaws are sturdy; you’ll also need a sharp, strong hook with a long shank to puncture their lips. 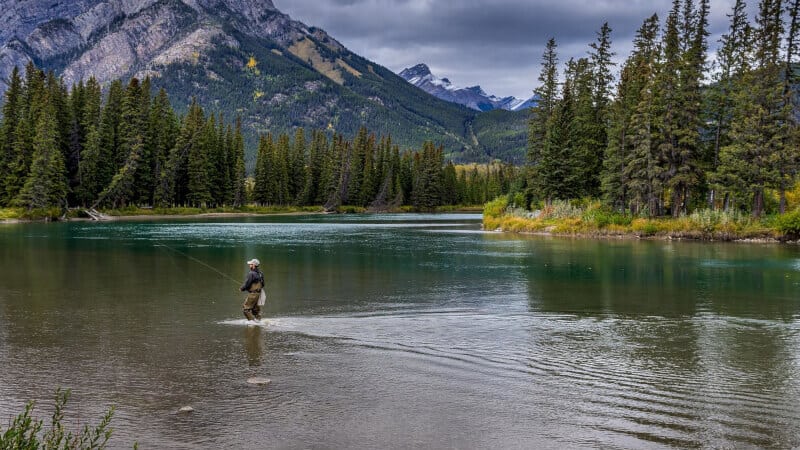 Local experts advocate a hefty steelhead rig or a lighter sturdy crankbait rig to combat the strength of these bowfin fish.

For catching these tough sport fish, the line is vital. Fluorocarbon’s strength makes it the best choice, particularly for spinning setups.

For baitcasting rigs, a medium-test braided line is a great choice. However, a 17 to 35-pound test is usually a suitable choice for these grindle game fishes.

A bright spinner with bait on the hook is very productive in the murky brackish waters.

Can you eat bowfin? Many anglers who go bowfin fishing consider this species trash compared to most other fish and unfit for consumption when caught.

Bowfin fish isn’t the river’s tastiest fish, but it can be prepared to serve at the dinner table.

How To Catch Bowfin

The bowfin is not a light fish, and anglers targeting bowfin must have a light touch to catch one.

Because bowfin fishing gets aggressive, they will bite the subsurface and top-water presentations, so you don’t need to be picky about the tackle you use.

The best rods for catching this fish are medium-light or light rods used around locations with a lot of vegetation, such as bogs.

Dogfish will bite live and dead bait such as shrimp, crayfish, nightcrawlers, minnows, other small fish, and larval salamanders. The fish, while a pest, can also be used, and it is thought to help balance gamefish populations.

If you like artificial lures, you can use any bass fishing lure, such as spinners, minnow jigs, and crankbaits, but make sure your shiny spinner is made of metal. The fish has razor-sharp teeth that cut through soft plastics.

Put on a size that complements the hooks you’re using.

Small bait requires small hooks, while large bait needs larger hooks. If you have more than one rod in the water, it’s good to experiment with different hook sizes to see what they bite on.

Bowfin amia calva jaws are challenging to breach; therefore, use sure hooks. J hooks function better than circle hooks in sizes 3 to 3/0.

When fishing for mudfish, use a braided line weighing 20 to 30 pounds. This will give you enough heaviness to handle even the most aggressive fish, and the stiff line will aid in hook setting.

A 1 to 2-length long wire leader will keep the bowfin from tearing through the line and taking the bait or lure.

Landing a bowfin isn’t tricky; finding them is the challenging part. It’s just a matter of throwing out cut bait and waiting for a bite once you’ve found the perfect canal.

It’s beneficial to move around and be an active angler until you find a spot where the bowfin congregates. (Read Best Fish To Catch And Eat)

Between April and June is the best time to catch this game fish. That’s when this extinct fish comes out to the shallows to procreate.

Bowfin doesn’t establish a nest during spawning. Instead, the females tend to lay their eggs in one place where they will be fertilized by male bowfin.

Where To Find Bowfin

Bowfin is found in most pristine lakes and rivers of the eastern US and southern Canada. And, as some of their names imply, they live in “dirty” water. They inhabit wetlands and drainage ditches.

So, when seeking bowfin, find water areas with lots of vegetation cover.

The bowfin will ambush prey traveling to or returning from deeper water by hiding in the vegetation. So, if you can find a deep channel with a grassy bottom, you may find a bowfin. 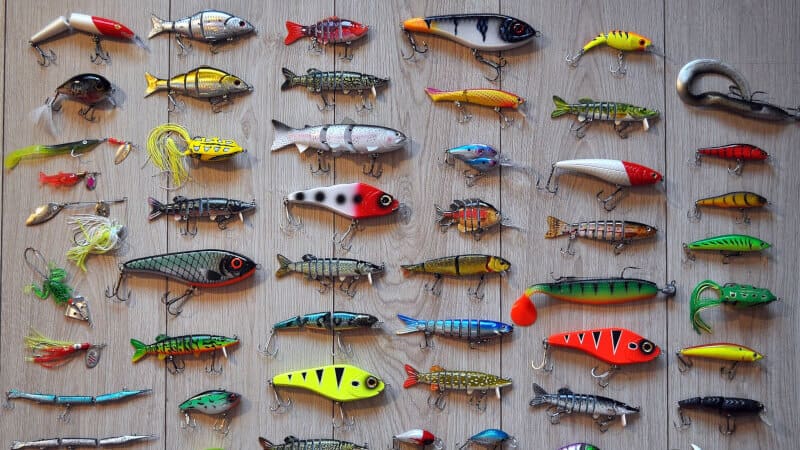 Bowfin is not fussy eaters, as evidenced by the bait list above. You can also fish these baits in various ways to catch bowfin. To tempt a strike, employ live minnows below a bobber.

You’ll want your bait minnow to be approximately six inches to a foot off the bottom since it will be in the strike zone.

Alternatively, a piece of cut bait can be rigged on a bottom rig to tempt a bite from a waiting bowfin.

Bowfin is an excellent fish for beginners and experienced alike because there are many different ways to catch it.

Bowfin fishing is done using a couple of different setups.

A basic bobber rig with a circle hook is a popular setup and is an excellent rig for either live or cut bait.

Set the hook depth to approximately a foot off the ground and fish this rig right on the edge of a drop-off near vegetation for the best chance of triggering a bowfin strike.

A bottom rig is another popular rig for bowfin. Again, a weight approximately six inches above the hook is recommended.

The water conditions will determine the weight’s size. If you’re fishing in a swamp or pond, you may require a heavier weight than fishing in moving water. 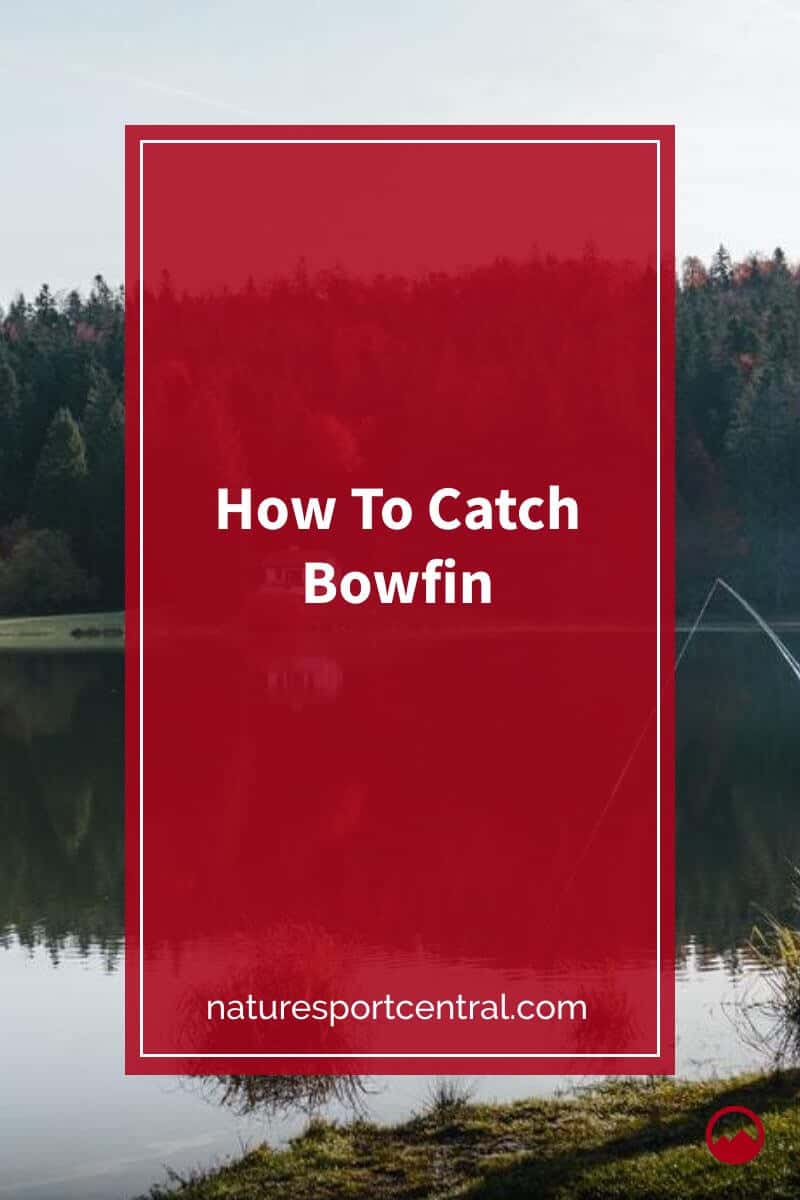