All pet owners should be concerned about their animal’s digestive health. “Do betta fish poop?” is a question that every betta fish owner asks during their fish’s life. You can keep track of your betta fish’s overall health by learning how often they poop and what healthy feces look like.

Although knowing what normal fish poop looks like goes a long way to know if you have a sick fish or a healthy fish.

Betta fish do poop, but you might not spot it all the time. You may just detect waste on the bottom of your tank instead of your betta’s excrement because it doesn’t happen often. However, if you pay attention long enough, you’ll see your betta fish or other fish species’ poop.

How does fish poop look like may appear strange, yet it is normal?

In our guide, you can learn more about your pooping fish, and what it means by how and when they poop. You need to change tank water regularly, and you could spot a fecal cast and think it is other forms of debris.

However, by the end here, you’ll have enough information to know if your fish has a bloated stomach through constipation, or you see the water is tinged brown behind your fish, and they have diarrhea. (Read Can You Eat Bass) 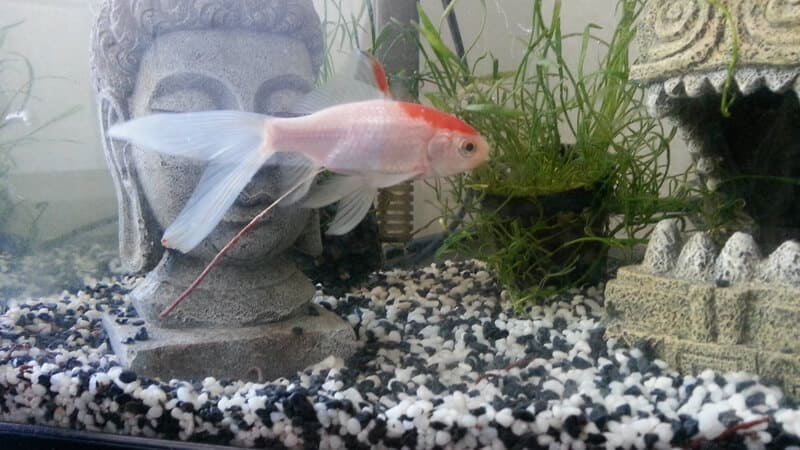 Why Is There Poop Hanging From My Fish?

Betta fish excrement is often tiny since bettas have small stomachs, and once your fish are fed regularly, they will poop more regularly.

Although you may not see many fish poop every day, it’s handy to check your betta’s poop is normal, that your fish is pooping regularly, and the fish isn’t bloated.

Bloating and the formation of long stringy feces are common signs of constipation in fish. Constipated fish feces has like a sting in poop that dangles from your fish. String in poop hangs while the regular fish feces would drop to the substrate.

You can discover that constipation doesn’t affect the amount of excrement a fish produces but affects how readily the digestive tract can get rid of them. Constipation or swim bladder disease can cause betta fish to swim around dragging a long poop.

Bloating is a common complaint. Fortunately, in most circumstances, it can be avoided, and if it occurs, it can be treated.

The most efficient way to avoid swim bladder sickness is to overfeed. Stop feeding the fish for a few days to allow the digestive system to empty and the swim bladder to heal. Fiber can be added to its diet by feeding it thawed frozen pea pieces or daphnia. In the wild, herbivorous fish encounter not a lot of issues with constipation. (Learn How To Get Rid Of Fish Smell On Hands)

In addition, make sure the water temperature is between 74- and 82-degrees Fahrenheit, as the fish’s digestive system and intestinal tract slow in cold water.

In other words, if your fish doesn’t leave a dark brown patch in the water after swimming in a laxative, they could have a parasitic infection. 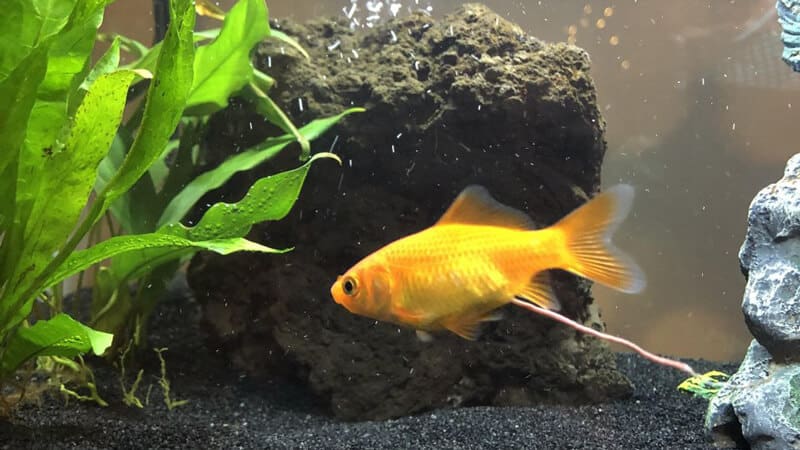 Is Fish Poop Supposed To Float?

If your betta has stringy white fish poop, it may have parasites and if so, these can be treated with aquarium treatments.

If you have betta fish, it is rare to find they have parasites. If you purchased a new plant or fish to your tank, and your betta fish has white stringy poop, the reason you may find for white stringy poo is that your fish isn’t eating.

A fish eats when it is happy and feeding more food won’t help besides dirtying your tank water faster. Fish can quit eating for many causes, and stress is the main reason.

Either a bully, lack of hiding places, a tank that is too small, or poor water conditions all lead to stress in fish. Besides, bettas stop eating should they get exterior bacterial infections or fungal illness, rather than internal parasites.

You can see your fish has white fish poop for nothing more than boredom-induced stress. The way to start here is, make sure the fish is eating at feeding times.

It’s difficult to track which fish’s poop belongs to which species in a large aquarium. Observing your fish’s excrement might help you monitor their health. The color and consistency of fish excrement can vary if something is amiss.

The color of betta’s poop may differ slightly from the pellet meal, which is another excellent clue that you are looking at fish poo and not a wasted dinner. (Find the Best Fish Finder For Kayak)

Size: Betta excrement is like the food pellets they eat, but smaller. While it takes a keen eye to recognize one amongst the rest in your fish tank, since Bettas prefer to cluster together, it is easier to check for a cluster of feces rather than a single poop.

How Often Does a Fish Poop?

Fish will poop as frequently as they can or when there is a pressing need to expel waste from their intestines. If you feed your fish the same amount of food consistently, they will poop at the same time. Continuously fed fish will poop at least once every 48 hours.

Bettas are sly poopers who keep their toilet habits hidden. They prefer to do it in the same spot, with some solitude, and they usually choose a vegetated area or a corner to do their business.

Betta Fish owners frequently mistakenly believe their Betta’s stop eating or pooping at all since their poop resembles their meal. So, if you’ve observed ‘food’ in the tank’s bottom, it’s possible it’s not pellets.

Betta fish poop 5-6 times per day if they are provided a nutritious diet and the right amount of food.

Bettas eat as if it’s their last meal since it could be in the wild or on the coral reefs. As a result, it’s easy to misinterpret this survival instinct for hunger and overfeed your tropical fish in fish tanks, perhaps causing health concerns.

Your Betta fish will be healthy, and the frequency of the betta fish poop will be consistent if you feed them according to the food manufacturer’s instructions and keep their tank water at the proper temperature. 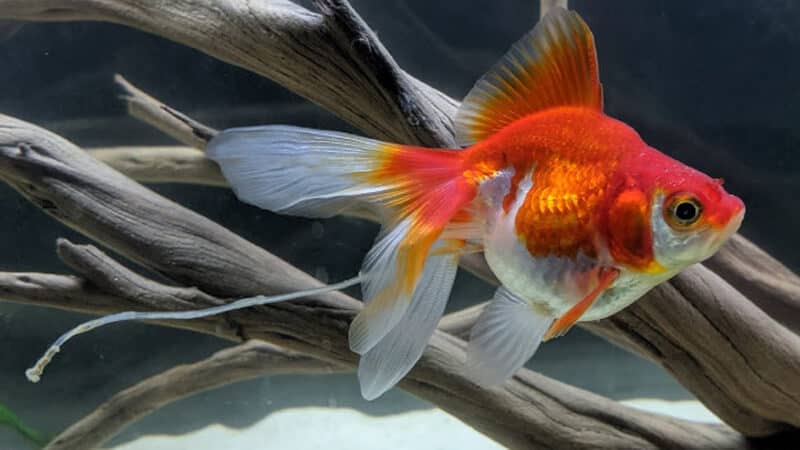 Goldfish are another popular fish to maintain when fish keeping and poop hanging can reveal difficulties with your fish rather than what they eat.

There is a lot of discussion about what goldfish excrement should look like, just like betta fish poop. Everyone has a unique response. There is, however, one that is more accurate than the others. Poop from goldfish should resemble whatever you feed fish.

In addition, your goldfish excrement should have a solid consistency and sink to the bottom of the tank, and not be stringy poop hanging from your goldfish’s body.

Goldfish feces are available in a wide range of sizes, shapes, and colors. Knowing what’s normal and what’s not, will help you figure out if something is wrong with your goldfish.

Your goldfish’s white poop could be caused by a variety of factors. However, if your Goldfish is going black, it could be a sign of something else entirely. Regardless of the source, if your goldfish has white poop, it’s likely that something is amiss.

If your goldfish’s excrement has white, stringy poop, and lumpy, there are a few things that could cause it.

Poor Diet: A poor diet is the first culprit. Live food, meat, tropical flakes, and greenery should all be included in your goldfish’s diet. It’s possible that if they don’t get all of this, their feces will turn white.

Internal Bacterial Infection: A bacterial infection is another prevalent cause of this type of diarrhea. You may notice that your goldfish is bloated, lethargic, and has a little appetite besides white, stringy, lumpy feces. Fortunately, if a bacterial infection is caught early enough, it can be treated with the right fish medications.

Internal Parasites: Internal parasites may also be present in your goldfish. Tapeworms and roundworms will be the most common culprits, while Hexamita may also play a role in rare circumstances. Internal parasites are unlikely to affect goldfish in tanks, fortunately.

Whitefish poop called translucently, or pale happens from underfeeding goldfish or there are not enough nutrients from the same food they are eating.

When a fish’s poop is pale or translucent, it shows that there isn’t enough food in it. You’re not looking at excrement but the mucus coating that all goldfish have.

You should try switching their diet to include more animal proteins and vegetables, as well as high-quality fish flakes. If this does not work, consult a veterinarian who can recommend fish antibiotics or another treatment depending on the cause. 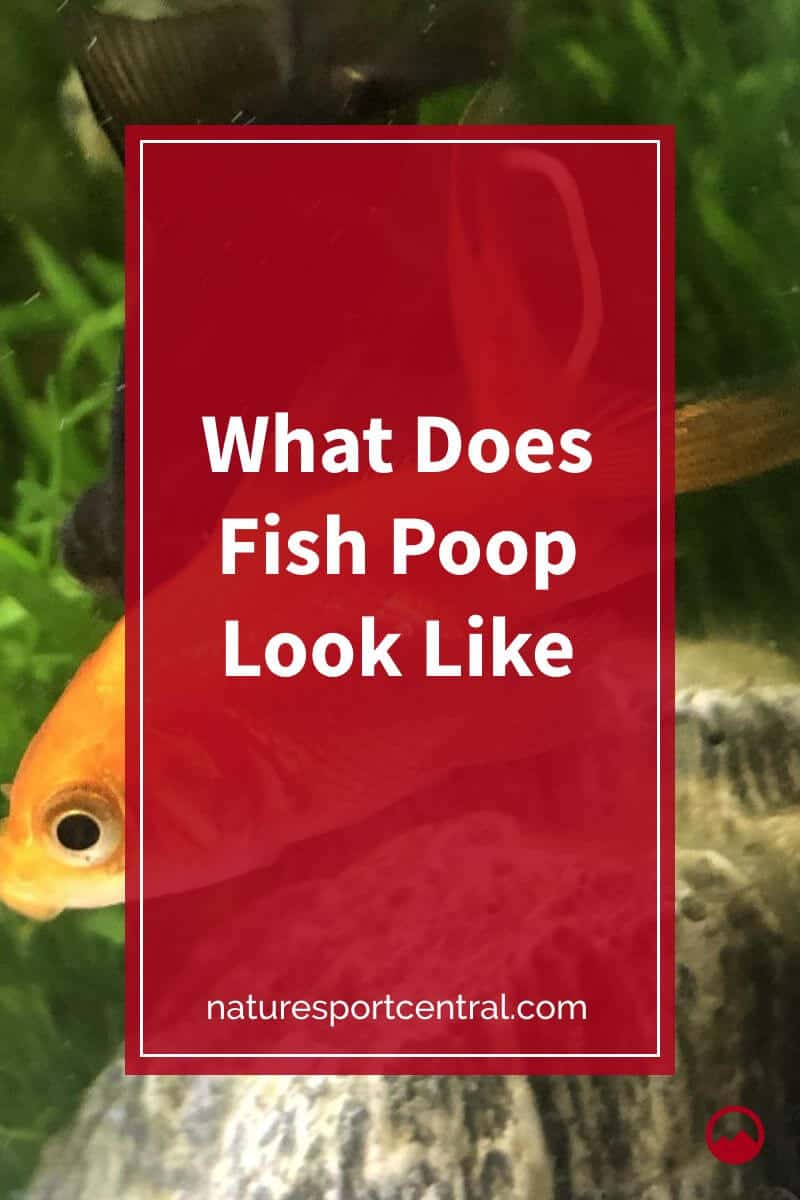