Have a red dot sight? First, you must zero the reticle so your POA matches your bullet’s impact point (POI). Your POA often may not match POI when you install your new red dot. Shots can hit high to low or left to right regardless of how good your aim is.

At this point, you need to know how to adjust a red dot sight for dependable performance. Most red dots project a laser onto a target. The laser’s point travels in a straight path regardless of distance; although most shooters quickly learn, bullets never maintain a straight line.

Over long distances, they’ll arc and then fall further they travel. So zeroing in your sight matches your red dot’s point at a known distance. As many sites are fixed, there are others you snap into position. A good example is the Wheeler Laser Bore Sighter. It is a Class IIIR and has a power output of less than 5mW. To fasten it to your weapon, there is a magnetic connection quickly and easily attaches to the gun’s muzzle.

Even with this, it would have to be hand-tuned in the beginning. In our guide, you can learn more about tuning in a laser module permanently secured to your gun in our guide. 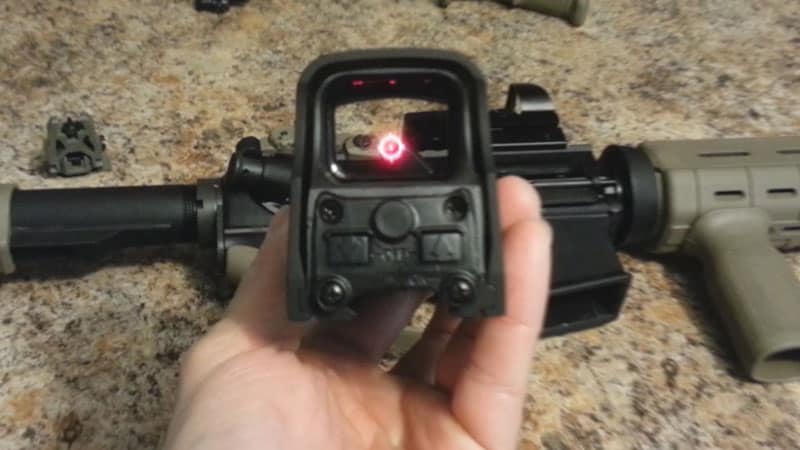 By the end, you can have the best accuracy by sighting in a red dot scope; instructions are included. (Find the Best Budget Reddot)

How Far Is A Red Dot Accurate?

A laser will be accurate as far as it can shine. Unfortunately, your weapons are far less than this; thus, red dot accuracy depends on your weapon.

There are things to understand besides the caliber of gun you are using.

How can you quickly see the variations (in inches) between the point of aim and the point of impact so you can make adjustments? For example, you can zero a red dot with two different instruments, and we recommend using both to ensure a precise zero without wasting ammo.

Your new red dot will likely be far from zero when you install it.

Shooting at a target from 25 to 50 yards out is risky, and to measure and change your reticle, you must hit the target.

It’s recommended to start with a boresight to get yourself on paper. Then, a boresight shines a laser through the barrel to simulate a live round.

A simple chamber boresight can help you zero out farther. Prices may vary, yet they allow you to get on paper without firing a single round.

Remember, a boresight only gets you on paper at a short distance. Bullets don’t travel straight as your laser does. So if you zero with a boresight beyond 50 yards, your bullets will land below the target.

You have to shoot a target and measure the difference between point of aim and bullet impact to zero.

You can use a grid target, sighting target, or zeroing target that is full of one-inch squares to show how far off-center your bullet impact was to the aim point. 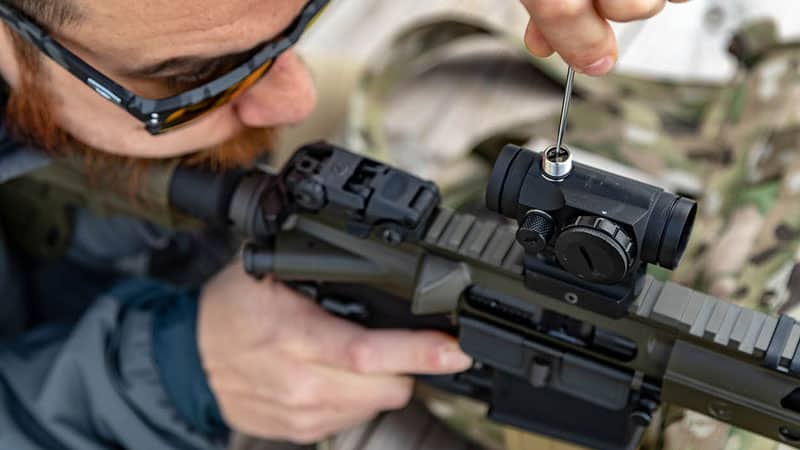 How to Zero Your Red Dot

Here are some examples to follow. Using a grid target at different known distances, you can start making adjustments with 1, 1/2, and 1/4-MOA turrets.

With the 25-yard zero, you can easily practice self-defense, close-range shooting, and indoor range accuracy. Within 50 yards, you’ll have a fairly flat bullet trajectory.

Because the 25-yard zero affects the bullet’s flight path, most handgun and rifle ammunition will hit a bull’s eye at 5 and 12 yards with no changes. (Learn How To Sight In A Crossbow Scope)

A three-shot group with a red dot in the center could show 2.5 inches right and 3.5 inches high.

Using the calculation, calculate inches per MOA at this distance:

Fire a second three-shot group following the changes. Make any further adjustments based on the above before you make your last three-shot group to ensure your impact point matches your red dot’s target.

The Marine Corps uses the 36-yard zero because it allows for point-blank and long-range engagements with minor changes. Because at 300 yards, aim matches impact.

If you get odd figures, round to the nearest adjustment.

The 50-yard zero is popular with law enforcement, hunters, and most riflemen. Most rifle rounds, especially the.308 Win,.223, and 5.56 NATO have a reasonably flat trajectory out to 300 yards with this zero. At 200 yards, the point of aim will also match the point of contact.

Keep in mind to work gently and make modest adjustments. Don’t adjust after every shot, and take your time sighting in.

Should You Co-witness A Red Dot Pistol?

Brace your handgun and adjust the red dot to match the iron sight alignment if your iron sights will absolute co-witness the red dot.

To “zero an optic,” you must go through a process that produces a predictable and ideal point of aim and impact for your red dot. (Learn How to Measure Your Draw Length)

The point of aim is the spot on the target where your dot is. Your round’s point of impact is where it lands. The words “predictable” and “desirable” are crucial here.

The ideal point of aim and point of impact scenario is for the bullet to hit precisely where you intend.

Your red dot handgun is unlikely to be zeroed at the distances you shoot right out of the box.

There will be some deviation from the planned point of contact, measured in MOA (Minute Of Angle). As a result, the goal is to essentially “zero” that variance.

You can use two approaches to accomplish this.

How to Sight In a Red Dot: Supported Or Unsupported?

When identifying the point of aim/point of impact, the endorsed school of thinking contends that it is preferable to eliminate as much human error as workable.

Most shooters use some type of benchrest to keep the pistol as still as possible during the zeroing procedure. The trigger is the only portion of the rifle that can move in the optimum benchrest setup before ignition.

This school makes sense in theory. If you rest the gun on the bench and fire three shots, they should all land in the same spot. 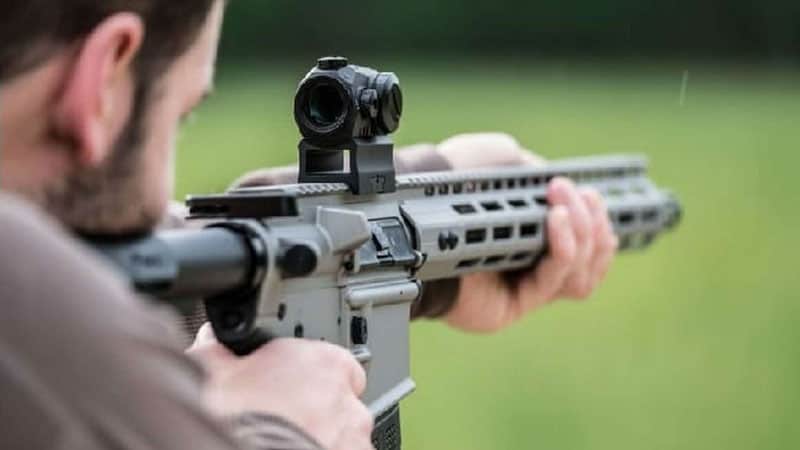 Many more experienced shooters prefer to zero their rifles without help. This is accomplished by just firing the rifle as though it were aimed at a target.

It is preferable to zero an optic without support if shooting for competition or self-defense.

For an unsupported zero, there is a caveat. However, from the chosen zeroing distance, the shooter should be confident in their ability to hold a three-round group.

If you’ve mastered the fundamentals of grip, front sight alignment, and trigger control, then going for an unsupported zero can be advantageous.

Whether you are zero supported or unsupported, the procedure is the same.

Approximately 80% of shots in practical shooting sports are under 15 yards. With a 15 yard zero, most handgun and ammo combinations will work out to 25 yards without changing your point of aim.

The first step of the zeroing process is to determine your red dot impact baseline relative to your target.

This is the difference between hitting and aiming. Fire 3–5 shots at the target from your starting position. The number of bullets hitting the target should be close together.

Once you know where a few rounds are hitting the target, you can adjust the red dot sight to match the bullet’s point of aim and impact.

After two efforts at an establishing group from 15 yards, no bullet marks on the target?

Move closer to the target and repeat the same process with further adjustments until you receive bullet marks on paper.

Zero a Red Dot for Windage and Elevation

Windage and elevation adjustments are available on sighting equipment (such as red dots and scopes). The point of impact will be shifted left and right by the windage adjustment.

The point of impact will be moved up and down by the height adjustment.

We now know where the bullets affect where we are targeting after completing the first step. Next, we move the point of impact to the exact point of aim using the windage and adjust elevation.

The first step is to determine how far away the bullets are from the target. After that, convert the measurement to MOA. After that, you can make windage and height with the appropriate “clicks.”

Assume you find that your current bullet impacts are 5 MOA above the target and 3 MOA to the left.

You’ve determined that one “click” of the windage adjustment equals one MOA of bullet impact adjustment by reading the instruction manual for your red dot, and the same is true for the elevation adjustment.

The greater the distance between the point of impact and the desired point of aim, the more clicks you’ll need. Windage and height must be adjusted independently of one another on your red dot optic.

You’ll need to confirm zero at 25 yards once the point of impact is identical to the point of aim at 15 yards.

Remember that practical shooting sports aren’t known for their accuracy, and you only need to hit the A Zone.

When shooting at 25 yards after zeroing at 15 yards, most handgun and ammunition combinations will encounter minor variances compared to AR platforms.

It’s good to check zero regularly once you know how to sight in a red dot. 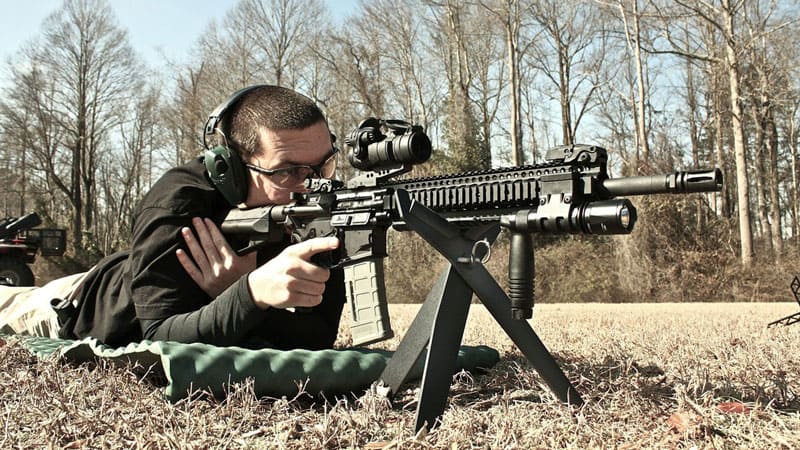 Do You Leave The Red Dot On All The Time?

If you keep a magazine in your rifle or pistol on standby, you probably have the red dot optic powered on.

However, if you are not ready to shoot or not loaded, your red dot optic should be turned off to conserve battery power.

Can You Boresight a Red Dot Scope?

Bore sighting might help you get near to your red dot.

Here you can learn more on how to zero a red dot sights without iron sights?

To be honest, every gun owner needs one. Bore sighting a red dot saves bullets, time, and money.

Laser Bore Sighters can help you get the bullet on the paper and closer to the target.

Simply place the laser bore sight into the bore and aim at the target. The laser dot will allow you effortlessly zero the red dot without shooting.

Place the upper on a solid platform, such as a bench rest.

Assuming you’re aiming at 50 yards, try to bring the barrel to the target’s center.

Look through the sight once it’s been adjusted and adjust the dot location to be in the center of the target. Double-check the barrel position; you’d have to start over if it shifted while adjusting the red dot. (Find the Best Arrows For Target Shooting)

Fire some groups to determine the point of impact and make any necessary minor adjustments. 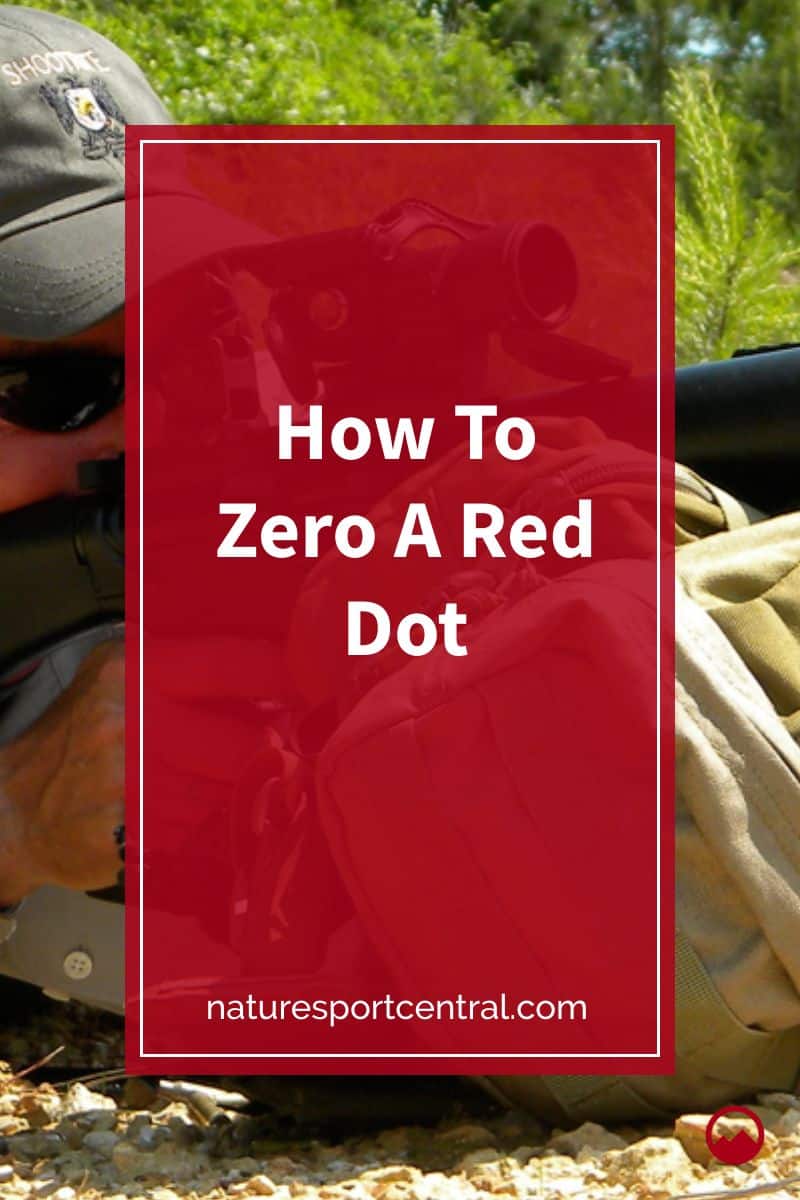