Shrimp are scavengers who eat various items while traveling through their natural habitats. Shrimp, both marine and freshwater, are becoming increasingly popular in home aquariums. They spend their time scampering around the bottom of the tank and helping keep the tanks clean as they feed through all the waste they find.

A shrimp will eat anything that doesn’t eat it first and can comprise algae, other dead shrimp, leftover fish food, living plants, and any decaying organic debris. So almost anything that falls to the bottom of an aquarium can be a food source for freshwater shrimp.

If you consider adding shrimp to your tank, you’ll need to know what freshwater shrimp eat exactly and what they won’t. Any foods need to resemble what they would eat in their natural habitat.

However, it doesn’t mean the answer to what does freshwater shrimp eat; it means they can survive on leftovers. You can find all the other foods that make up part of their healthy natural diets in our guide. 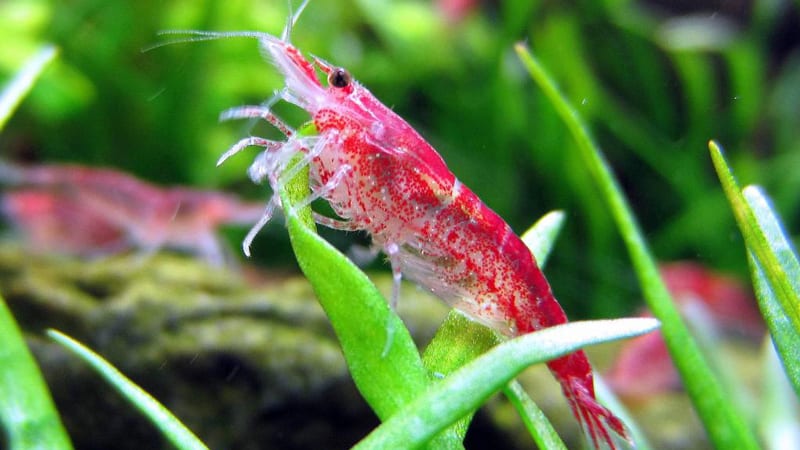 By the end, you’ll have enough information to know what you can buy from the local pet store and what freshwater shrimp food you can feed them from around the home. (Read What Is the Best Bait for Crappie)

Shrimps are scavengers and can feast on decaying organic matter. However, they draw the line at eating fish poop or feces.

Sometimes, they can mistake it as food, and even if they have it in their mouth, shrimp act surprised and spit it back out. Here you can find more about certain new shrimp species and what they will eat.

Shrimps eat a range of foods based on their environment, where they live, and their stage of development. To keep your shrimp healthy, serve them a meal comparable to their natural diet. Tank-bred shrimp and their wild relatives have similar diets and nutritional needs.

If you have a saltwater marine or reef tank, you may like to add a few Pacific cleaner shrimp varieties. Marine shrimp come in a variety of colors and patterns, and they make a lovely addition to your neighborhood while also cleaning up after themselves and working for you.

The juvenile saltwater shrimp return to the ocean floor or tidal estuaries, where shrimp graze for organic materials, eating algae, and eat plankton and tiny creatures around the coral reef.

Adult sea shrimp scavenge whatever they can find. While patrolling the substrate, ocean shrimp eat dead fish, plants, clams, crabs, and other decomposing organic materials. Wild shrimp are also cannibals, and larger shrimps prey on smaller, weaker shrimp if hungry. A larger shrimp could eat anything smaller than its size. (Read Do You Use A Bobber When Catching Catfish?) 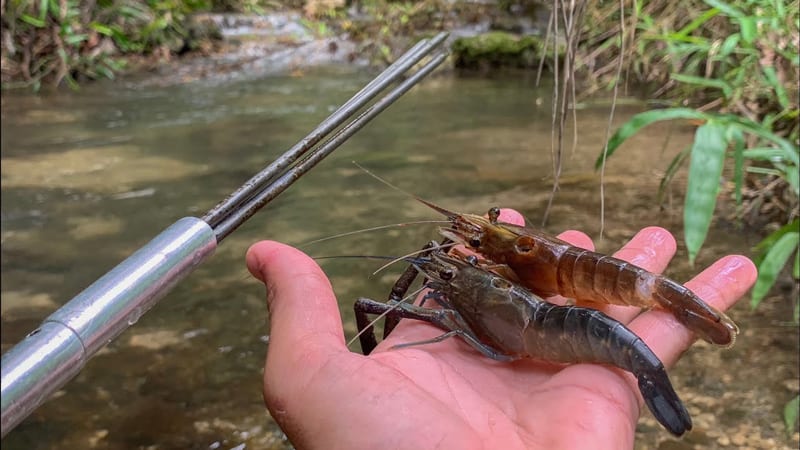 Freshwater shrimp are scavengers, probing the substrate for bacteria, algae, decaying plant materials, and other microbes to graze on.

To be properly balanced, all aquarium freshwater shrimps eat a plant-based diet with some animal protein or commercially prepared shrimp foods.

To protect their newly formed shell, shrimp go into hiding for a few days. Then, as part of the shrimp diet, shrimp will eat the calcium-rich shell to help keep them strong and healthy.

Algae should be your shrimps’ main food source. So only introduce shrimp to an established tank with plenty of green algae for grazing. The shrimp will cheerfully nibble at the algae almost constantly, which is why they are so popular as communal fish tank pets.

If there is a lot of algae in the tank and the shrimp are eating it, you probably don’t need to give them anything extra. However, if the algae are gone, you will need to feed the shrimps.

If your shrimp’s algae levels are low, offer them some veggies to eat. You can also give them carrots, kale, and sweet potato.

Peel, slice, and blanch the veggies in boiling water for a few minutes.

Remove the blanched vegetables from the water and set them over ice to stop cooking to stop the cooking process and soften the fibrous vegetables so the shrimp can eat them in the tank overnight. Then, in the morning, remove what’s left of a piece of veg.

Freshwater species of shrimp live among a leaf-covered substrate. Dried leaves are ideal for shrimp because they feed on rotting debris and the creatures that live on them.

Rather than collecting pesticide-contaminated or pest-carrying leaves from your garden or park, buy almond leaves (Catappa leaves) from your local fish store or online.

While commercial shrimp feeds and fish meal are handy and easy to use, be sure to choose high-quality food with a balanced nutritional profile, especially for young shrimp.

If keeping Bee shrimp, check the food is made for them before purchasing.

Shrimp are bottom dwellers and will feed on parasites and skin from dead animals in the water. So what do shrimp eat if they feast on such carcasses?

Buy almond leaves (Catappa leaves) from your local fish store or online instead of collecting pesticide-contaminated or pest-carrying leaves from your garden or park.

Shrimp have varying preferences, although the majority are omnivores. Some shrimp species, notably saltwater cleaner shrimp, are known for cleaning fish. However, cleaner shrimp cling to rock or coral outcrops. This would make them easy prey for passing fish.

Instead, they entice passing fish with their antennas. When a small fish stops, a shrimp jumps on top and starts picking off loose scales, dead skin, and parasites. They even enter predators’ mouths to scrape between their teeth!

Shrimp are the safest crustaceans to add to your tank full of small fish. 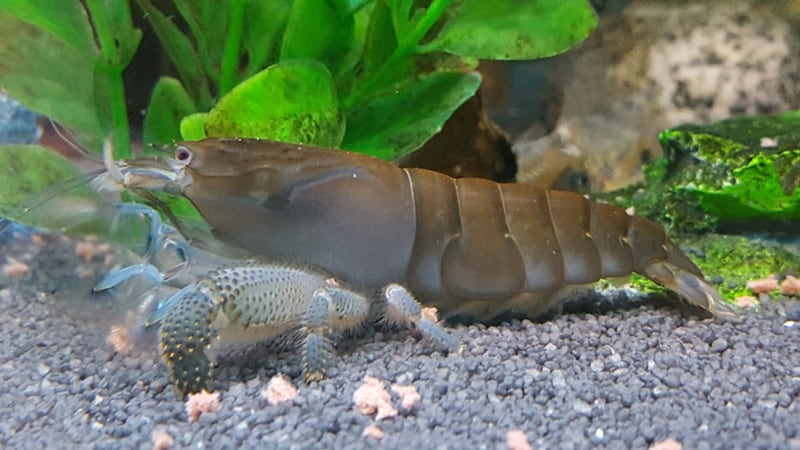 Vampire shrimp and bamboo shrimp are rare shrimp species, and unlike other shrimp, they don’t clean or scavenge biofilms. Instead, they use bristled limbs to sift out floating food bits.

Plankton, crushed flakes, live or frozen foods like baby brine shrimp, and daphnia are all welcomed by these specialized shrimp. They often stand on plants or driftwood, facing the filter outflow.

Bamboo shrimp may even compete for the best position in the current, hoping to catch food; shrimp-like the vampire shrimp is nocturnal and not very social.

What Does Shrimp Eat In A Food Chain?

Shrimp serves an essential role in the animal food chain, and food webs would become unbalanced without them. Scavengers, adult shrimps are. They eat worms and dead crabs, clams, snails, and fish. They assist in removing dead decaying matter from the ecosystem in this capacity.

Fresh water shrimp in the wild are scavengers who explore their natural streams for algae, bacteria, and other microorganisms, as well as decaying plant matter.

Dried cuttlefish bones can be found in the bird area of pet stores.

You can take a tiny bit and put it in your aquarium. However, it will sink on its own after a few days if you weigh it down with decor. (Read What is the Difference Between Trout and Salmon)

Cuttlebone is almost entirely formed of calcium carbonate, yet it’s also somewhat soft, unlike crushed coral. As a result, shrimp will graze on it, supplying dietary calcium necessary for shell formation. It will also leak small amounts of calcium into the water.

The best part of making your shrimp meal is knowing precisely what’s in it. Preparing the best food takes some time and work, but you can make large batches and freeze them later.

There are hundreds of recipes and tutorials available for making plant-based foods from fresh veggies and all the plant material you can have around your home.

It can also make your tank happier as your shrimp eat something different in their varied diet rather than another algae meal.

Here’s what makes up a common shrimps diet. 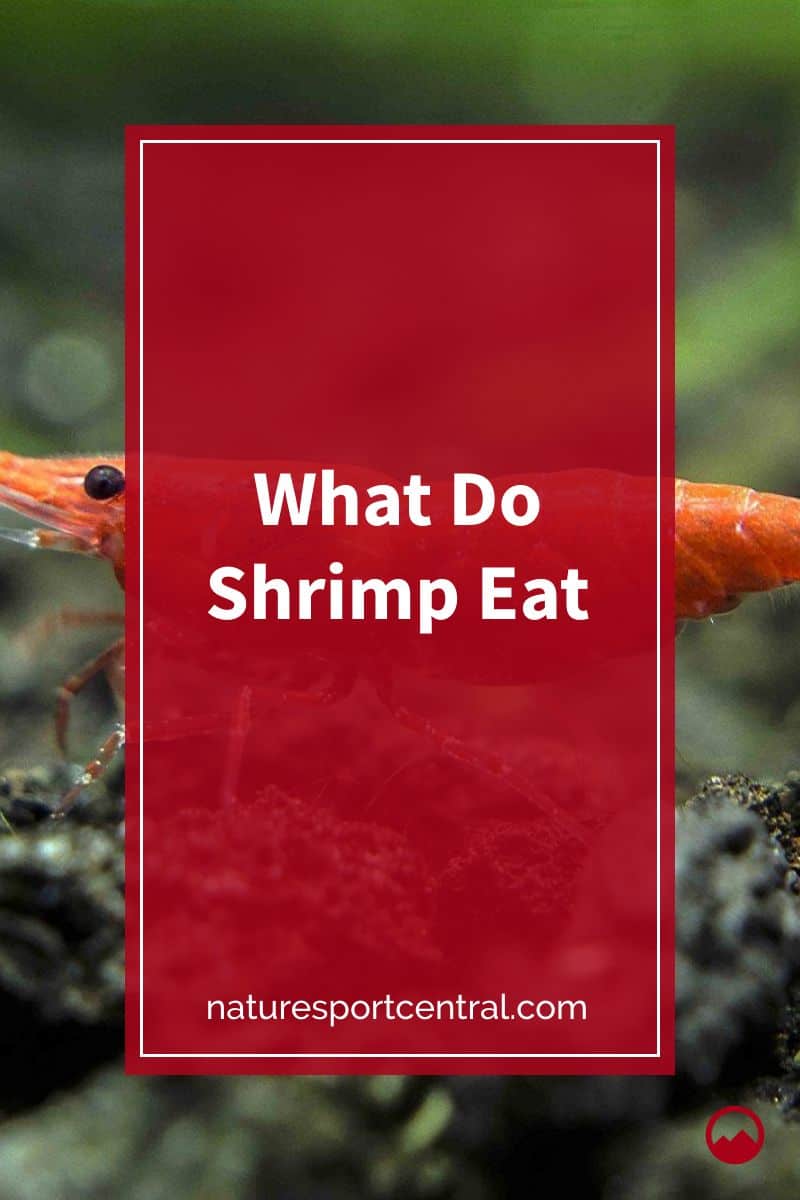