There are things to think about purchasing a kayak. But, most often, the weight of kayak and is there a weight limit for kayaks is often at the back of your mind when buying a kayak for the first time. A standard recreational kayak, for instance, typically has a specific weight limit of around 250–300 pounds.

All kayaks, be it a touring or sea kayak, or fishing kayak, come with a manufacturer’s maximum capacity rating, and it will differ between the kayak size and the material used in construction. So, knowing if a kayak suits you takes more thought than it looks nice.

Although there is no industry standard, it is down to the manufacturer to determine how much the kayak weighs and how much gear it can carry along with the paddler. As a result, kayakers need to be aware of a kayak’s weight limit, as this is the maximum weight you can safely carry and stay afloat. (Learn How Much Does A Kayak Weigh) 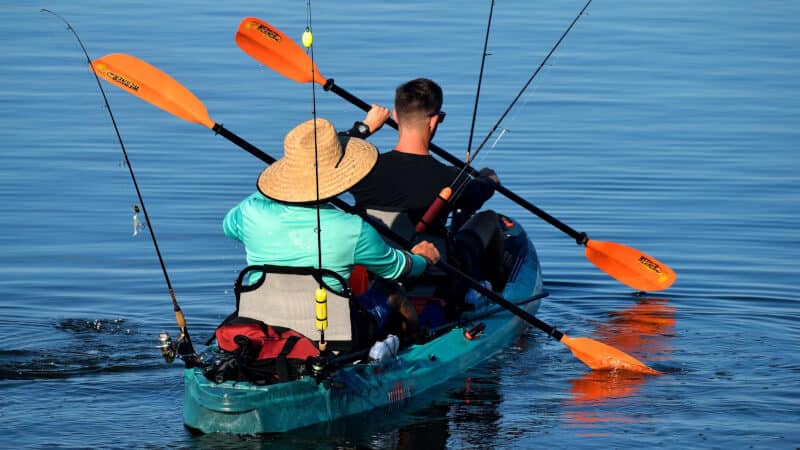 In our guide, you can learn more about kayak maximum weight limits and how they could impact your purchasing decision.

In the end, it doesn’t matter if you want a touring, sea kayak, or fishing kayak. You’ll know the capacity of the kayak and how to calculate this with your own weight limit, including all your gear and equipment.

How Heavy is Too Heavy for a Kayak?

The weight capacity of the kayak should be one of the most important considerations when determining the appropriate size kayak for you.

The dimensions, including the length, width, and other aspects, can confuse beginners.

Because of this, they forget how much gear and equipment they carry and how much weight it adds to their kayak.

All kayaks have weight limits, and you could find the perfect kayak for your needs has a maximum capacity totaling around 125 pounds over your body weight.

To determine your weight and that of your gear and equipment, you can take the manufacturer’s maximum capacity rating and reduce this by 20 – 35 percent, which then gives you a safe 80 percent of tandem kayak weight restriction, according to a good rule of thumb.

What Happens When Exceeding Weight Limit on Kayak?

When overloading the limit of a kayak, you’ll make the kayak sink lower into the water.

Depending on the design, such as a typical recreational kayak or sit on top kayaks, they may not sink, which could make them unstable and increase the chances of capsizing.

When you exceed your kayak’s load capacity, several things happen. First, your cockpit could flood if you have a sit-in kayak. Alone, this may not sink your kayak, but it adds weight, making it sit even lower in the water.

Once this happens, you lose the safety of your kayak, and if you paddle in sea kayaks, this could lead to an accident.

Lower in water leaves you exposed to waves and wind, and once you reach your kayak’s weight limit, you lose stability, raising the risk of capsizing.

If using touring or sea kayaks, you’ll see why it is more important to spread gear weight, weight affects balance, and the bow and stern of your kayak could give you the perception kayaks are overloaded; it is just more weight on one end.

No matter whether using recreational kayaks all the way to paddle boards, every kayak has a weight limit.

Here, you can find out what can help determine the maximum limit of a kayak.

Maximum capacity is the most weight or extra weight you have while it still floats, and you can control it easily.

As we can see, the manufacturer’s numbers should only be used as a general reference, not with all the stuff you could load.

For example, the average weight limit should be used instead of the high weight limits found on most fishing kayaks. However, a sit-on-top kayak may be more forgiving as you won’t have as much gear affecting the actual maximum capacity. (Learn How Many Miles Can You Kayak In A Day)

If your fishing kayak is close to your weight limit, the kayak can sit too low and sway while you cast out with your rod.

Three things to determine maximum capacity should be considered when buying a kayak.

Manufacturers use length, width, displacement, but they don’t always hold true. You can compare inflatable kayaks a, sit-on-top kayak to a touring kayak, even though sizes could differ.

Here are key areas affected when you get close to any kayak weight limit.

Decide your own maximum weight limit using the 80/20 rule to ensure your weight means you won’t overload your kayak. With the paddler weight, you should be comfortable paddling in calm water.

You can rapidly determine the kayak’s maximum weight capacity limit, which gives you a “performance weight limit.”

Every kayak has a weight limit, and you can use this formula for any form of kayak, be it new or used.

Now that you understand why you shouldn’t max your kayaks weight limit let’s speak about how much weight you can put in your kayaks.

You have your totals that put safety first and provide the best overall. However, some manufacturers now label their kayaks with both the conventional “safety limit of a kayak” and a “performance weight limit.”

Generally, maximize your load at:

Less than 35% of maximum capacity

Keep the weight of all the gear and yourself inside your kayak at least 35 percent less than its declared safe capacity if you want it to perform at its best. Even better is a 50/50 split for the ultimate in kayak performance.

This weight comprises the kayak’s gear and the paddler etc.

The formula for a kayak’s performance weight limit is as follows:

Here you can find the typical weight limits for maximum performance at 35% less than kayak safety limits.

Using 65% capacity of your kayak practical weight limit may appear strange. Although, you can tell the difference compared to paddling at maximum weight capacity, and it makes your kayaking experience more enjoyable. (Read About Kayaking Paddling Techniques)

What Is A Common Kayak’s Weight Limit?

Here you can compare maximum weight capacity for kayaks of different weights. You will notice that it doesn’t give a different size kayak, just the weight you’ll find.

Remember, we have to account for person and gear weight. So, as a rule of thumb, you’re talking about a 155-pound person plus 25 pounds of gear.

A 215-pound paddler weight with 25 lbs of gear totals that.

Examples of the weight limit of 400 lb:

Assuming our calculations are correct, a kayak with a 500-pound weight limit allows us to use up to 300 pounds of performance weight. 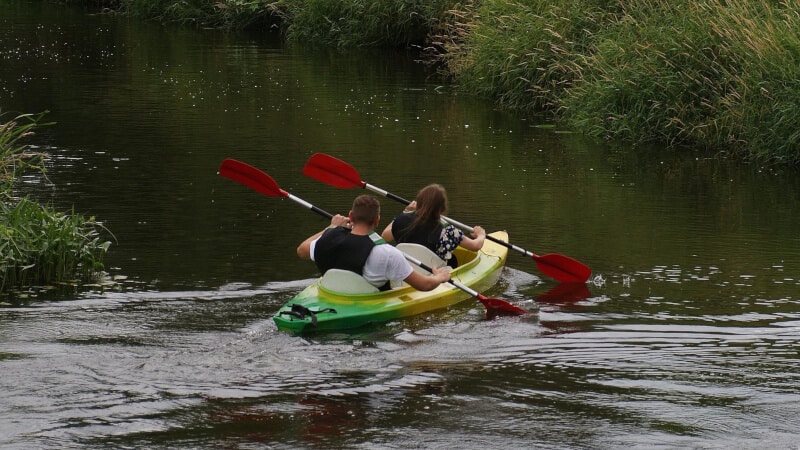 Tandem Kayak: Capacity Of A Kayak

They carry two people, although this doesn’t mean you can carry anything you wish.

To determine the kayak weight limit, it must include the weight of both passengers and all the gear.

What amount of weight can the kayak support? Weight restrictions for touring, ocean, and recreation kayaks range from 200 to 450 pounds.

Kayak weights range from 400 to 550 pounds and are higher for fishing kayaks carrying more gear.

The weight capacities of tandem kayaks range from 450 to 700 pounds and beyond. (Read Is A Kayak Considered A Watercraft) 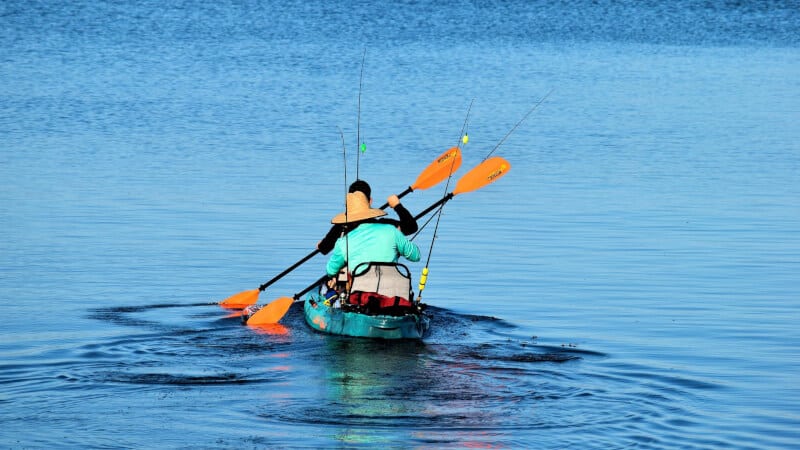 Do Fishing Kayaks Have Weight Limits?

Since there are so many distinct kayak brands, models, and weight possibilities, as you might have suspected, the answer to the question is unique to each kayak and varies between manufacturers.

What Is A Pelican Weight Limit?

What weight limits apply to a Pelican kayak? Depending on the model, the maximum weight capacity of a Pelican fishing, touring, or recreation kayak can range from 200 lbs to over 425 lbs.

Among leisure and touring kayaks, Pelican Kayaks are some of the most well-liked models available.

To give you an idea of what’s available on the market, the following are some typical Pelican kayak weight limits:

Here are some Pelican kayak examples: 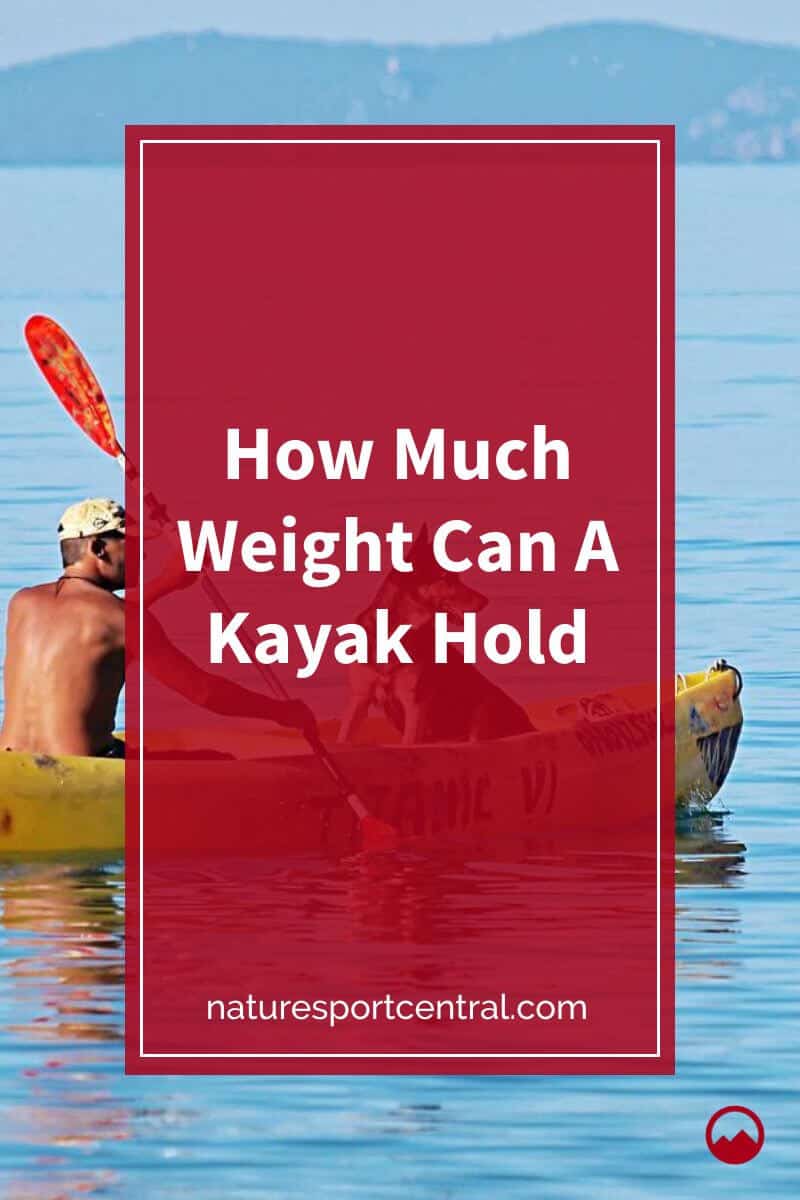