When buying a kayak, the weight of a kayak is rarely on anyone’s list of essential considerations. Some kayaks are made from fiberglass, carbon fiber, and plastic. Others, such as a shorter kayak or a whitewater kayak, can weigh much lighter than other models.

A kayak’s length, width, and material construction all have a significant role in performance, and while an inflatable kayak is lightweight, it might not be the best option for your needs.

If you’re starting out, stick with thermoform and roto-molded kayaks for weight, durability, and cost. It’s essential to consider the materials used to build your kayak, even though lighter isn’t necessarily better. Besides material and kayak durability, other factors include loading a hefty kayak yourself. (Learn How Far Can You Kayak In A Day) 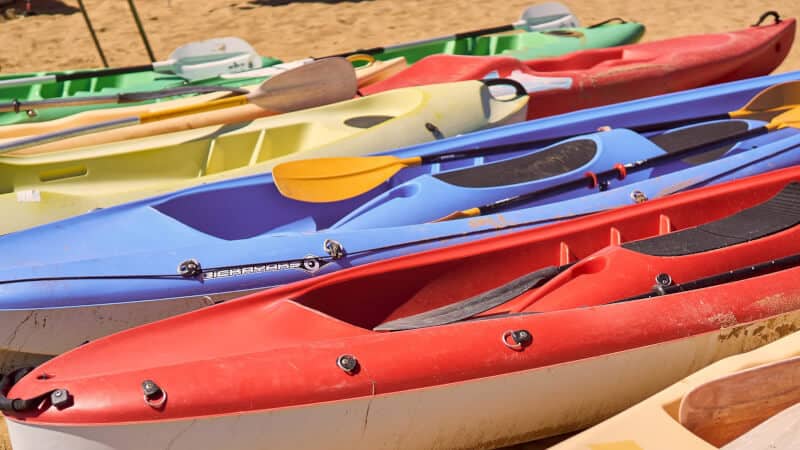 There is the weight restriction of a roof rack or carrier, particularly if you are hauling a larger tandem kayak on a kayak trailer or just one fishing kayak.

In our guide, you can learn more about why does kayak weight matter? By the end, you’ll see the differences in weight between the common kayak material types and the easy ways to get your typical kayak to and from the water and loaded onto your vehicle.

How Heavy is a Kayak?

The intended application, among many other things, affects a kayak’s average weight, so there are many factors to consider before purchasing one.

If you use the kayak frequently, you may find that the weight of a kayak impacts performance.

In addition, if you carry a heavy kayak or attempt unloading and loading onto your truck or roof rack, you may not feel like doing a full day of paddling.

The first thing to affect kayak weight comes from the kayak manufacturer, as each one will use different materials in their product line.

Hard plastic, known as polyethylene, is used to produce food cartons, automobile parts, and other goods besides kayaks.

While not the lightest material, polythene is inexpensive, yet it’s challenging to get one of the wider plastic fishing kayaks onto your car roof yourself.

Composite kayaks constructed of fiberglass, graphite, and occasionally Kevlar are much lighter than those made of polyethylene.

These kayaks are light enough to be carried by any average-sized adult. They cost more money, though.

A sturdy waterproof fabric skin with a collapsible frame constructed of wood, metal, or plastic are features of folding kayaks.

Compared to the other two types of kayaks discussed above, folding kayaks are a lighter kayak model, weighing about 30 lbs compared to another kayak of the same size in another material. 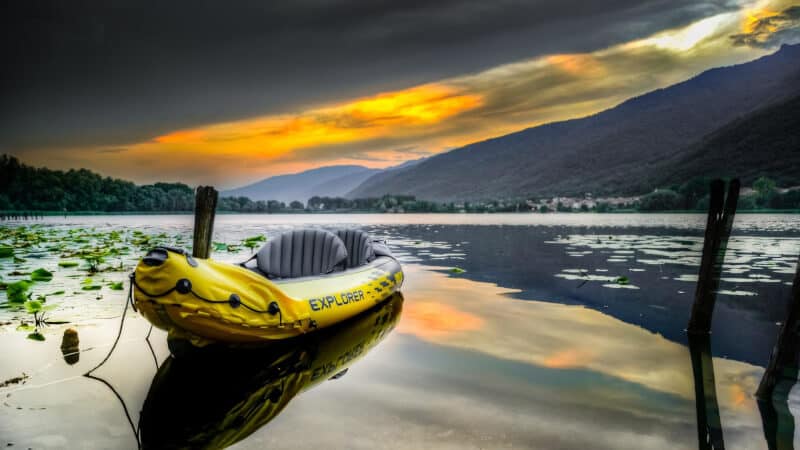 Inflatable kayaks need to be inflated with air before you may ride on the water. Even a fully inflated kayak is light enough for children to handle, though, since these are merely air and cloth.

When deflated, inflatable kayaks can be folded to fit into a carry bag or backpack, so they can make kayaking more accessible than it is otherwise. Yet, many could offer a lower kayak weight limit. (Find the Best GPS For Kayaking)

Some kayaks achieve their desired strength-to-weight ratio while being made lighter by either making them shorter or using lighter materials. Covering the kayak weight spectrum, you will have a range of kayaks covering all sizes, yet any weight of a kayak will again come from materials most kayaks are made from. 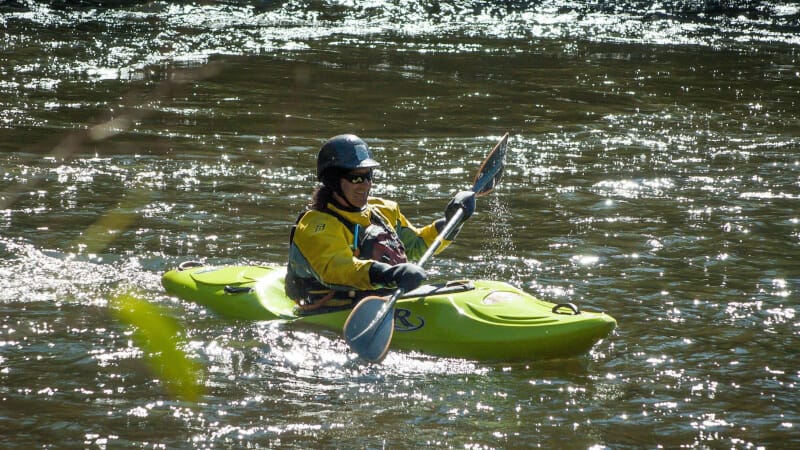 Compared to longer kayaks, shorter kayaks can be much lighter, although the weight of your kayak needs to be considered because of the material.

For instance, recreational kayaks or a fishing kayak at 10 feet and made from polyethylene, compared to a 13-foot touring kayak built of heavy-duty PVC, which can weigh as low as 30 pounds, the weight of a kayak for fishing can easily be over 60 lbs.

Since features like speed are determined by length, sea kayaks and touring kayaks are far longer than ordinary single-person kayaks.

Thankfully, longer solo kayaks may not be significantly heavier than shorter solo kayaks. To reduce weight while maintaining rigidity, the hulls of a sea kayak, for example, are often made from lightweight carbon fiber composites.

Two-person tandem kayaks are substantially heavier than one-person kayaks, and you’d struggle to carry one because of weight and physical size.

You’ll quickly see an inflatable kayak will weigh less than a hardshell kayak.

It means you might carry a larger kayak, paddle, and inflation pump from your car to the water easier than carrying a hardshell kayak of a comparable length.

An inflatable kayak at around 14 feet, on average, will weigh 10 to 20 pounds less than similar-sized kayaks made from another material.

Although inflatable kayaks are lighter, you shouldn’t use this as the deciding factor when buying a kayak.

Rather than a sit-in kayak, these are most often sit-on-top kayak designs.

Thus, some kayak anglers need a solid shell and a carrying capacity for all their gear. So, an inflatable may be a light kayak, yet they are not the best for kayak fishing.

Last, while these inflatables are lighter, you’ll find they can’t carry as much weight as a larger sea kayak or a tandem kayak and lack storage space. (Find the Best Kayak Rack For Car Without Rails)

Although you’ll find models weighing less than 50 lbs., most hardshell kayaks weigh around 65 lbs. Luckily, they can be carried and loaded onto a car roof rack by an average-sized kayaker.

What Is The Kayak Weight Capacity?

The most important factor when buying a kayak will be the weight limit of your kayak. There is no point in buying a light kayak that has a low weight limit and would be overloaded right away.

Kayak fishing is a prime example, which needs a higher weight limit than most.

For example, inflatable kayaks weigh far less, yet, load up with your rods and fishing accessories, and then the gear and kayak’s weight don’t leave enough for you to get on board.

You need to know how much weight you’ll be carrying, including yourself or with another, to determine your maximum weight capacity.

As another example, tandem kayaks weigh more than what an inflatable kayak weigh, yet they can carry two people and lots of gear compared to the lighter kayak, even if they are the same dimensions.

Why You Need The Kayak’s Weight?

It’s important to note that a kayak’s maximum weight capacity is influenced by its actual weight. Therefore, verify the weight of a kayak and include it in the overall weight you’ll need for your kayak expedition.

Your bodyweight when dressed appropriately with your floatation device.

The weight of kayak, plus your stuff, is divided by 0.8. gives you a 20% buffer toward your total weight limits.

For instance, you’ll need a kayak offering a minimum weight capacity of 400 lbs. if you weigh around 27o lbs. Add on what the kayak weighs; for this example, use a vinyl kayaks average weight of 50 lbs. With 25 pounds of gear, your total would be 345 pounds, so you have a buffer before reaching the 400-pound limit.

Length and kayak width is considered when the paddler is larger than average. It doesn’t vary with pedal kayaks, as these are typically wider and stable.

However, one challenge people with large bodies encounter is getting into and out of a kayak. If your kayak has a wide hull, it will be more stable.

This makes it simpler to enter and exit your kayak safely without tipping it over. Getting into your kayak will be a lot simpler for you as well.

For boats carrying heavier paddlers, kayaks with hulls at least 30 inches wide are the ideal option.

Not only does it provide stability, but it also makes it simpler to transition into and out of using your hips. In addition, wider hulls provide you with more room to spread out and sit comfortably. Fishing kayaks are often like this, so anglers can stand without the worry of tipping over.

Kayak Weight Matters But Not So Much

Because how much do kayaks weigh is important, it isn’t the deciding factor or a point of importance for many kayakers.

While you may have a compact-portable kayak, these don’t make very useful fishing kayaks.

So, no matter what a kayak weighs, you need one light enough to carry or use your kayak cart, which you’ll need to carry on your kayak while on the water.

If you want to get into paddle boarding, all of the above works with paddle boards. While they will be typically lighter than a kayak, weight capacity and size will affect their performance. 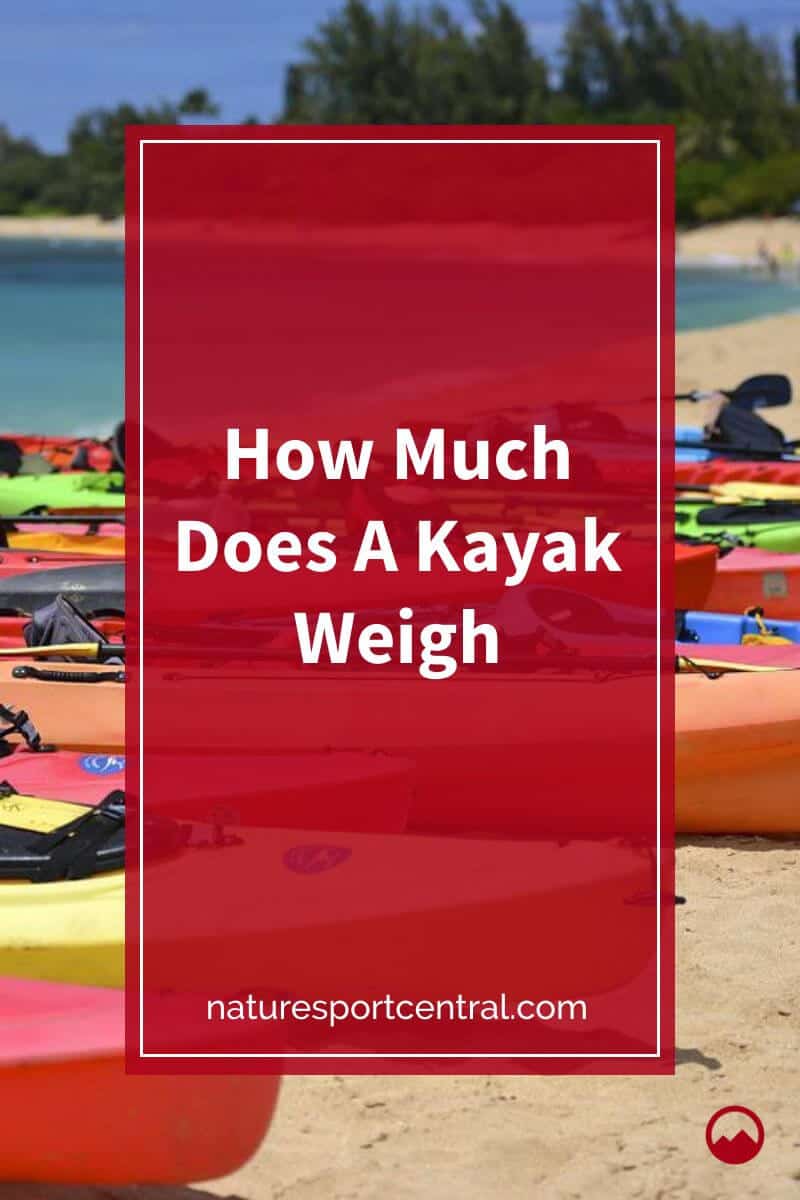