A day on the water spent kayaking with friends and family is an excellent idea. Kayaking excursions are enjoyable, and you can visit locations that are inaccessible in other ways. Boats are less mobile and versatile than kayaks, and if the family has tandem inflatable kayaks, can one person use a two-person kayak?

A two-person kayak can be used, although it isn’t just a matter of paddling a larger vessel. Many tandem kayaks come with unique challenges when compared to a single-seater kayak.

Many sit-on-top kayaks include extra seats in the middle, making it simple to control the kayak while seated there, and you can get a convertible tandem kayak seat for taller paddlers. Yet, these are still nothing like paddling individual kayaks with a single paddler. In our guide, you can learn why two-person kayaks require two paddlers most often when navigating narrow water pathways. (Learn How Much Weight Can A Kayak Hold) 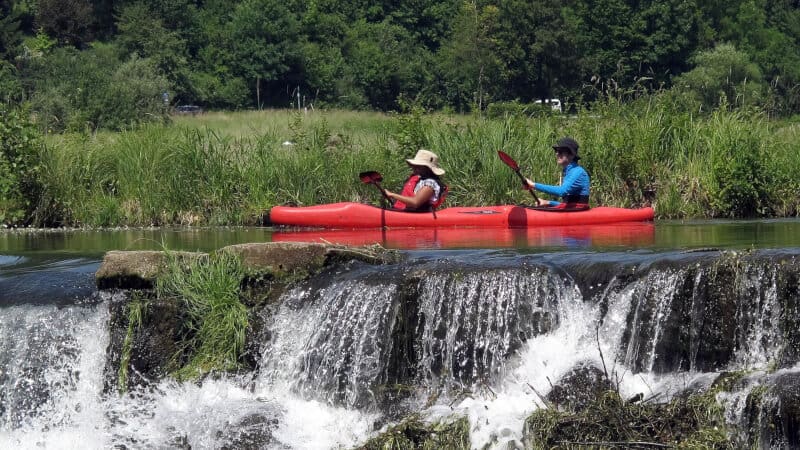 By the end, you’ll find out, can you use a tandem kayak solo or if you need a smaller boat. You’ll also see what you need to get a balanced kayaking experience.

What is a Kayak Two-Person?

A tandem kayak is a larger kayak with two seats positioned one behind the other.

A tandem kayak can be the ideal way to enjoy calm lakes for a more stable paddling experience.

However, if you think tandem kayaks are just for this calmer water, you can get a tandem kayak for many uses.

Because of the stability, tandem kayaks are great for multi-day kayakers who are heading down river, or they can be designed and used for kayak fishing as the maximum weight capacity will be far higher than solo kayaks.

Here are some benefits and drawbacks of using a tandem or a single-person kayak. 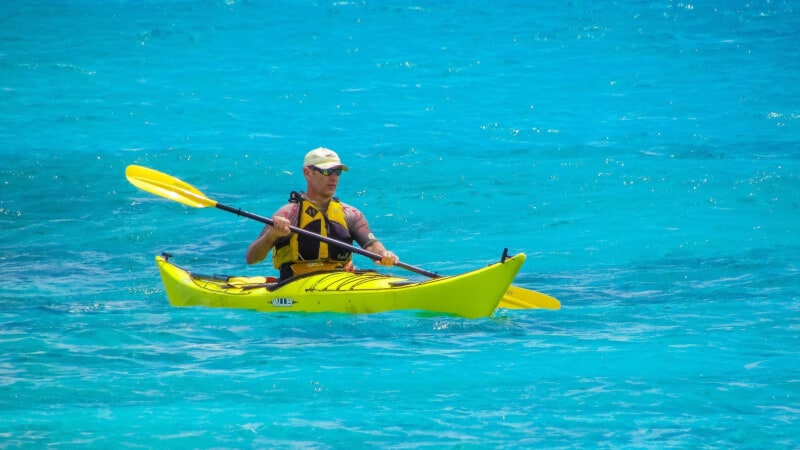 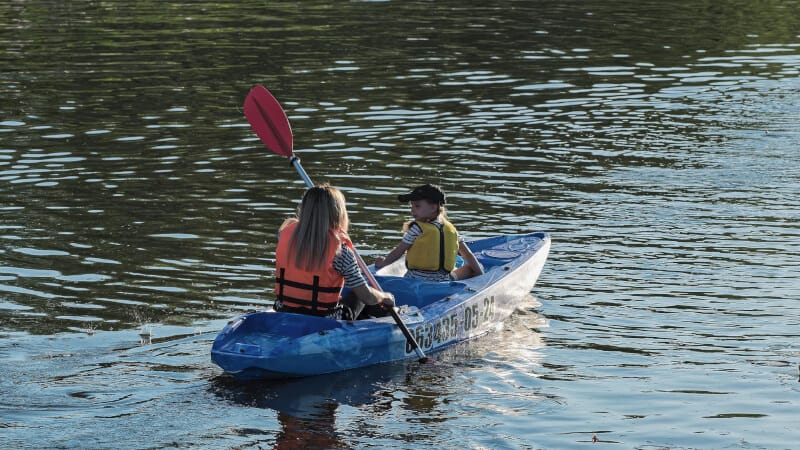 When you paddle a two-person kayak, they are a longer kayak, yet you can find more kayak variations or advantages for casual touring with a family.

When kayak fishing and there is with two people, you shouldn’t use a 1 or 2-person convertible kayak or inflatable kayaks. You won’t have the space, and you could lose riding stability or a kayak balanced when casting and the second person is moving.

How To Paddle Two-Person Kayak With No Paddle Partner?

The first thing to learn if you intend to use a two-person kayak with a single paddler is how to paddle a two-seat kayak.

Knowing how to paddle a tandem kayak makes it easier; if not, it can be more of a challenge for one person to use a two-person sit-in kayak.

Here’s how to operate a two-person kayak independently.

Sit in the Middle

With one person, sit in the kayak middle if possible. If there is only a single person in the boat, you can reposition the seat in some two-person kayaks.

If just one person, place something hefty in one seat and sit in the other if you cannot move the seat.

When you do this, the kayak can still be used with just one person inside and will be more stable.

A kayak rudder is a blade a single paddler will fasten to the stern of a kayak; when you ask, can one person use a two-person kayak? This is what you need.

The front end of the kayak may sit out of the water because of improper weight distribution, thus creating a larger surface area for the airflow to hit.

In powerful gusts, a rudder makes it easier for one paddler to steer a two-person kayak.

The kayak’s skeg is a blade you can use to restrict your kayak’s back corner from sliding in high gusts.

A skeg won’t help you turn, although it will help keep you straight and improve side-to-side boat stability in winds.

For best control and maneuverability of a two-person kayak, employ a rudder or skeg.

You’ll need to refine your paddle strokes if you have a two-person kayak with adjustable seats.

You might notice that the new place of your kayak seat, in the center of the kayak, is larger than the previous place. Your lower paddle angle may therefore be less efficient.

If that’s the case, your paddle stroke can benefit from a longer paddle. On the other hand, you may become used to using somewhat deeper strokes without approaching the water and risk losing your balance, as you could with a shorter paddle.

You might keep your balance without tipping too much over the tip of the kayak with a longer paddle by keeping your power strokes more compact.

Remember, if you paddle solo and you sit in the rear seat, you don’t want all the weight toward the rear.

Although you have extra space, place your bulky fishing equipment in the front seat or further forward to counteract your personal weight.

A single person can paddle a two-person kayak, yet not using less physical effort than they would in a small boat.

If this is you, you may find more success on open waters than on narrow rivers.

One Person Use A Two-Person Kayak

However, answering, can one person use a two-person kayak? You can, and some individuals can do this easily, while others may find it a challenge and lose their connectivity with a single kayak.

There are many interesting reasons why you should try kayaking a two-person kayak solo:

Taller kayakers encounter difficulties with many kayaks. If you’re taller than 6’5″, the conflict may be between fitting in a single sit-in kayak or straightening your legs to the sides of your paddling partner in a two-person kayak.

Buying a two-person kayak with movable seats, thus turning it into a solo kayak, is helpful for taller paddlers as it offers all the legroom you’ll need.

Each kayak has a weight capacity that the manufacturer determines. However, in many situations, you would prefer to stay within the range of 70–80 percent of the entire indicated weight capacity for the product.

It’s crucial to consider how much of a two-person kayak’s chassis is in direct touch with the water.

A two-person kayak provides plenty of extra space for loading more things if you want to enjoy a kayak trip or perhaps a strange adventure.

Two-person kayaks are the longest kayaks, so if you want to put up tents with a lot of equipment, a two-person kayak paddled by a single paddler enables several methods to jam equipment into the kayak without reaching your weight limit

Don’t expect to hit maximum speed when you have more gear on board.

Kayaking solo in a two-person kayak has some advantages, yet also it offers some disadvantages:

Using a two-person kayak sole makes it harder to maintain up with your group. So instead, two paddlers sitting strategically in the cockpit propel these kayaks.

You’ll discover how to paddle tilt affects stroke force when kayaking on your own. A longer two-person kayak can travel quicker than a smaller single kayak.

One paddler lacks the strength to reach the boat’s maximum speed.

To move a two-person kayak requires more strength than a smaller boat. Two-person kayaks feel heavier when starting from a stop or trying to turn.

If the seats in your two-person kayak are fixed, you’ll need to balance your weight.

With all your weight capacity in the back of your kayak (which you should), the trim will be off. As a result, your two-person kayak will resemble a speedboat, with the rear end in the water and the end up.

The biggest drawback of paddling a larger kayak alone is that it will be more challenging to transport to and from the shore. However, it won’t be a problem if you are fortunate enough to park your kayak on valuable land.

Two-person kayaks are heavier than a single kayak, making it challenging for one person to transport them. More materials are needed to create two-person kayaks.

If your kayak is a hard-sided model, the issue is even worse.

Solid shell kayaks for a single paddler typically weigh between relatively heavy and heavy. The weight of two-person kayaks ranges from mild to large. They are also challenging to transport due to their size.

It’s challenging to lift a two-person kayak onto your car’s roof rack. 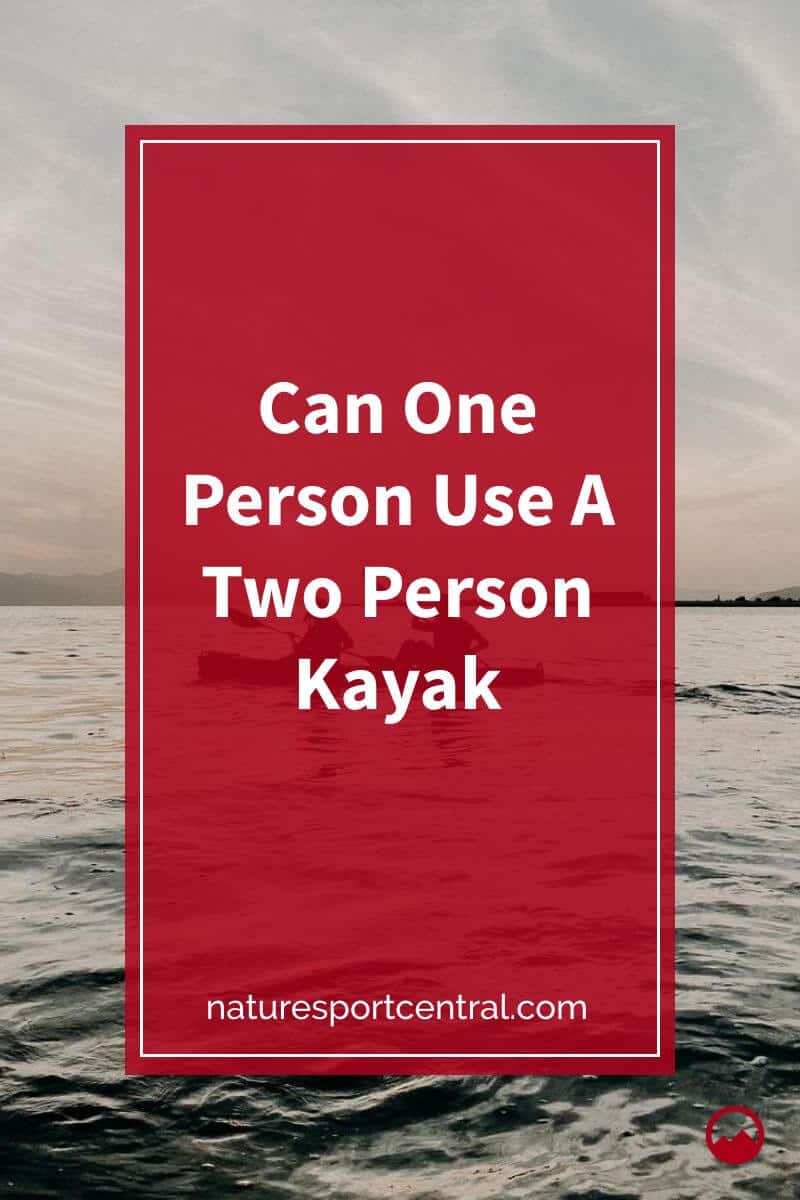