A kayak is a narrow, lightweight boat propelled by a double-bladed paddle that made many types of boats for hunting by the Aleut people and is now popular with kayak anglers and anybody who appreciates being on the water.

Traditional kayaks come in various lengths, widths, materials, designs, and other features. They can be as short as 8 feet and as long as 16 feet. In addition, fiberglass can be used to make kayaks for athletic events like the Olympics.

Kayaks exist in open and closed designs, each with its own set of benefits, one of which is that a sit-in kayak provides more stability than a sit-on-top kayak. Kayaks are popular among anglers and people. Others embrace kayaking as a recreational or adventurous activity. However, there are times and areas where a rule may catch you off guard. (Read Kayaking With Toddlers Guide)

Much of this is because of the question, is a kayak considered a boat?

Finding the answer to this is not as straightforward as you think. So, in our guide, you’ll learn more about using kayaks, are kayaks boats, and more.

By the end, you’ll know what boating laws you need to follow, such as do you need a boat license for a kayak or not?

Is a Kayak a Type Of Boat?

In some circumstances, a kayak could be called a boat. The problem arises, though, when you decide to register a kayak the same way you would a boat the day after purchase to take it out on a body of water.

The rules differ depending on where you are or your state. Let’s use the state of Kansas as an example.

If your kayak doesn’t have a motor or sail, it’s classified as a portable recreational water vehicle that doesn’t need to be licensed or registered.

When paddling your kayak with just a paddle, most of the restrictions that apply to boats don’t apply.

Kayak users should adhere to the same safety protocols and laws that apply to any boat.

Any recreational boater must know the navigational rules, which are especially important for kayakers to be aware of.

So, whether or not you label a kayak a boat, it must adhere to the same nautical standards as any other vessel or personal watercraft.

Would A Kayak Be Considered a Vessel?

Some waterways have a “no vessel zone” designation assigned to them.

A kayak or any other water-going vessel would be subject to a no vessel zone restriction, and here, you’ll find your kayak is considered a vessel by the U.S. Coast Guard.

Besides this, you’ll find a kayak classed as personal watercraft, so it doesn’t have one description; it has two.

A kayak will be considered a personal watercraft and a vessel by the U.S. Coast Guard.

The following is the description of watercraft as a vessel:

“The term “vessel” refers to any type of watercraft. Non-displacement vessels, WIG craft, and seaplanes are employed or capable of being used as a mode of water transportation.”

There are times when a “no vessel zone” applies to kayaking, depending on where you are kayaking. This is also for a good cause.

Commercial or military ports, docks where larger vessels are moored, and more are all classed as a no vessel zone.

It is easy to make the mistake of thinking that as you’re a recreational kayaker, you can paddle on any body of water. (Read What Shoes To Wear Kayaking)

Do You Need a Boat License for a Kayak?

The classification of a kayak varies significantly between states. All water-going vessels must be registered in some states.

Even inflatable or plastic kayaks are included in this category. However, regarding registration, boats and kayaks are treated similarly.

If you need to know whether you should register your kayak, you’ll need to visit your state’s website and any other state you will visit to check if any current registration is valid or required. 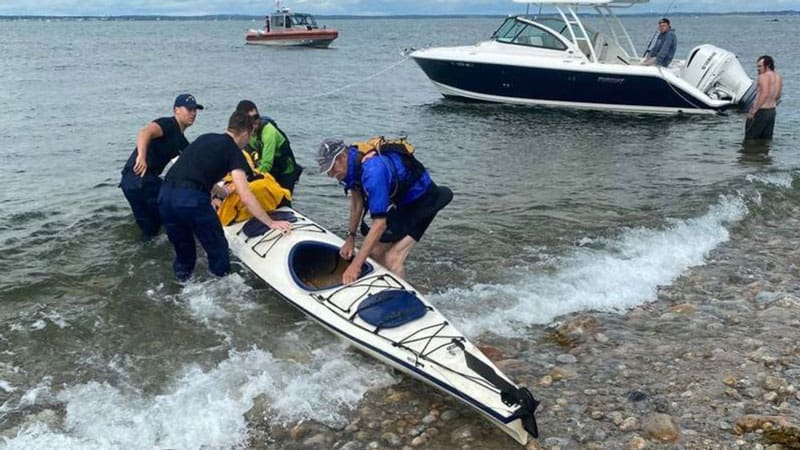 Kayak and Boat Rules You Need to Consider

Out on the water, navigational rules are like rules you’d face when driving a car.

The Coast Guard issues regulations that must be observed, and all boaters and kayakers must take precautions to manage the water safely.

The Inland Navigation Rules Act of 1980 set the guidelines for making navigational decisions on U.S. waterways.

This act mandates that all vessels, including kayaks, adhere to the rules.

The primary reason for including kayaks is to avoid any kind of collision.

A paddler of modern kayaks must be aware of and respect specific right-of-way restrictions as if they were steering a recreational boat.

This is true when sharing a river with a larger boat or vessel; there are also the weather conditions, and if an outboard motor or paddle powers your kayak, only like whitewater kayaks.

When negotiating a tighter channel, boating education says that any vessel shorter than 60 feet should not obstruct the passage of a larger vessel.

Other standards for onboard illumination apply to both a boat and a kayak.

An electric torch or a lighted lantern with white light will be required in a kayak.

These navigation lights should be readily available and visible at a certain distance, even on recreational kayaks, to avert a collision with an incoming vessel.

Difference Between A Kayak and A Boat?

The following are some crucial factors that differentiate kayaks and boats:

Design: Cockpit or a Sit-On-Top

This serves as a distinguishing feature between kayaks and boats, as cockpits are often considered to be considered as a boat and a paddler on a kayak.

Besides this, you can find many different styles, such as a sit-in kayaks, traditional kayaks, ocean kayaks, and twin hull kayaks, to offer extra stability when fishing or on rough waters.

In the past, materials such as wood and metal were used to build boats, but nowadays, most boats are made of fiberglass.

Wood, metal, and fiberglass have all been used in the construction of kayaks, and now there are inflatable and plastic kayaks. (Find The Best Kayak Brands)

Boats go quicker than kayaks because of their larger size and because an outboard motor usually propels them. Kayaks don’t have engines; therefore, there is just the kayak paddle.

However, you can now fit trolling motors to certain types of kayaks to paddle their way across the water or help you through rough surf conditions when fishing at sea.

Inside most boats, one or more seats are exploited for seating.

Kayaks do not have seats, relying instead on the paddler’s ability to move around while in the kayak. However, you can find touring kayaks that offer more space. 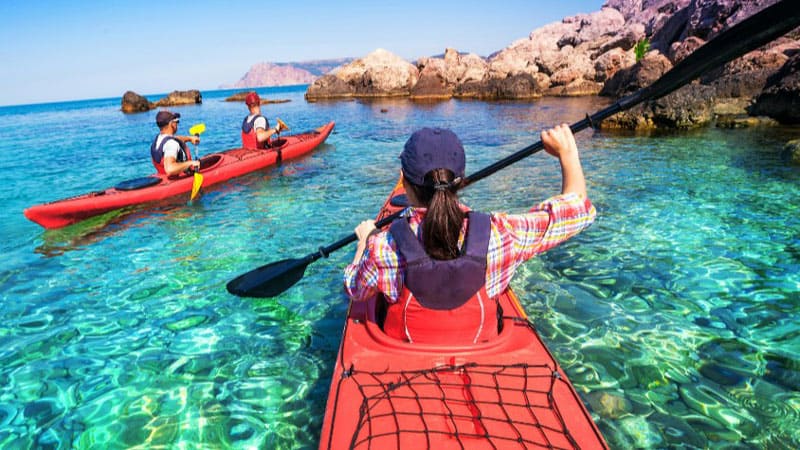 Why Are Boats Called A Vessel?

Like ships, sailboats, barges, canoes, and kayaks, a boat is referred to as a vessel.

A boat is referred to as a vessel because it can float and be steered/moved, either by its own means or by other means.

Ships, barges, yachts, kayaks, canoes, and other watercraft do as well. Craft is a synonym for “vessel,” but it usually refers to small boats, whereas a vessel can be any size.

Nowadays, the term “vessel” refers to any floating object used to transport people or products. As a result, a vessel can refer to ships, boats, canoes, or any other type of watercraft. It can also refer to any craft floating and moving on water.

A boat is a small craft or vessel floating on water and offering transportation. A vessel is a broad term that can refer to anything from a jet ski to a huge ship.

Some people differentiate it from a life raft by defining it as a vessel with a hull. A submarine of any size is referred to as a “boat” in nautical slang.

Is A Boat Called A Vessel?

A boat is a vessel because anything that can float and be steered/moved, either by its own or other power, is considered a vessel. Because boats share many of the same qualities as ships, barges, kayaks, and other vessels, they are also considered vessels.

It’s natural to believe that a kayak, unlike a motorized boat, would not follow the same laws set out by law enforcement officers.

Most people do not perceive a kayak as a boat in the traditional sense.

However, it’s critical to be mindful of the many water restrictions that regulate a kayak similar to a boat.

Because a kayak and a boat are considered “vessels,” the same regulations apply in some situations.

It’s critical to apply what applies and what doesn’t apply when piloting your kayak before getting out on the water. This is especially true if you’re entering an area where boats and other motorized vessels are common. 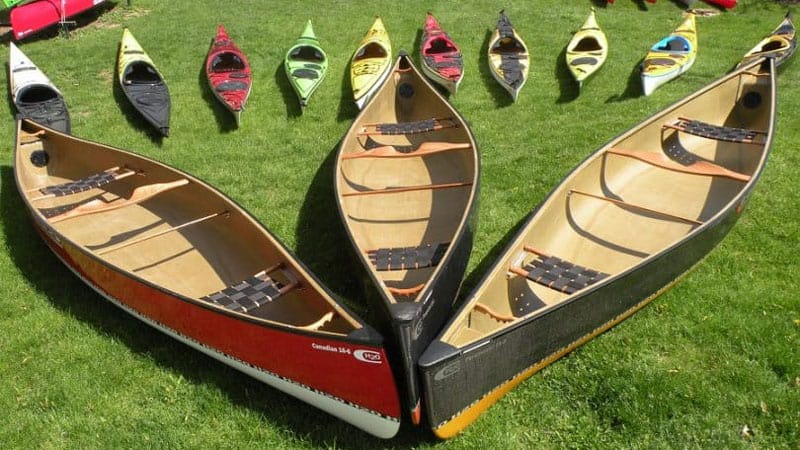 Can kayaks be used to cross the ocean?

While some people may be able to cross an ocean in a kayak, it is not recommended because small vessels like kayaks are not designed to handle such large quantities of water.

Kayaks are excellent for smaller, calmer bodies of water, and traversing seas is dangerous.

Although kayaks are frequently referred to as boats, most people do not consider their boats. Instead, because there is no clear definition of a boat, people might classify kayaks as boats.

Kayaks typically do not have cockpits, relying instead on the ability of the person paddling the kayak to move around while inside.

As a result, most people believe kayaks are not boats because cockpits are required to be considered a boat under ISAF rules.

Is a white water kayak considered a boat?

Because they are used for boating, many people consider their white water kayaks to be boats.

However, ISAF rules indicate that all boats must have cockpits, and most people would argue that white water kayaks aren’t really boats because they don’t have one.

No, most people do not consider kayaks to be watercraft.
Instead, the common view is that a boat is any vessel that can move across water, while a kayak can do the same but lacks cockpits and hence is not considered a boat by them.

Is a kayak considered a canoe?

Kayaks are not classified as canoes, even though they are both paddle-powered vessels.

A canoe is often thinner and longer than a kayak and has a smaller top shell than the sides.

Because they both utilize paddles to move through the water, some people don’t see the difference between a kayak and a canoe. (Learn How To Hang A Kayak On A Wall)

On the other hand, Kayaks and canoes are not the same thing for most people and should not be labeled as such. 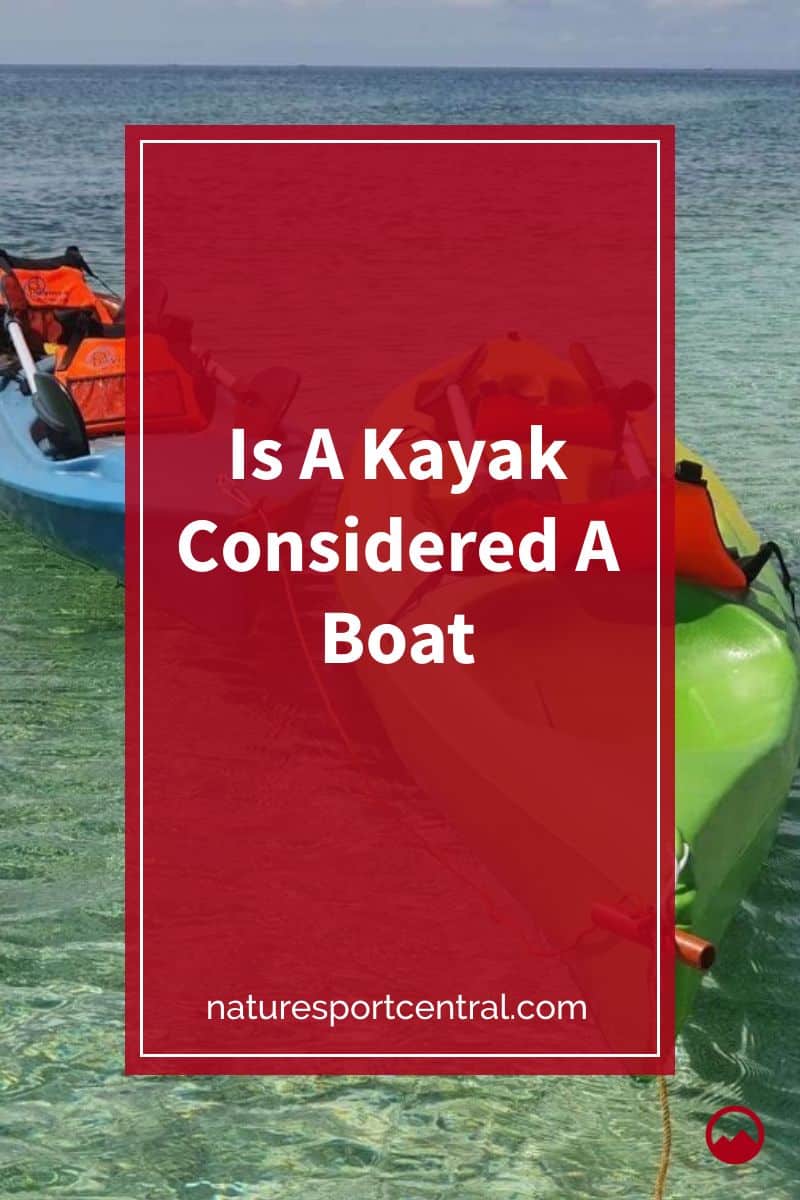