The goal of every hunter is to get the most out of their time in the woods. Knowing the prime time when deer are moving around can significantly increase the chances of bagging a buck or returning empty-handed. So, what time are deer most active during the day or year? Is it early in the dawn, late at night, or feeding time for deer throughout the day?

Do Whitetail deer prefer dry weather, or do they move around in it, and are there different seasons where they are active such as the rutting or breeding season? Even though most deer species are most active around dawn and dusk and other times of low light, you may occasionally see them moving throughout the day.

You may not be aware that Whitetail deer are sensitive to barometric pressure, and their movements vary according to this. Cold weather leads deer to feed, so they are more active when there is an approaching cold front.

In our guide, you can learn more about the best times to catch deer at their most active. By the end, you’ll know more about what time do deers come out, what myths are misleading about Whitetail deer movement, and more. If you’re lucky, you’ll be lucky with a buck you hunted from your new insight of when deer move. (Learn How Long Are Deer Pregnant) 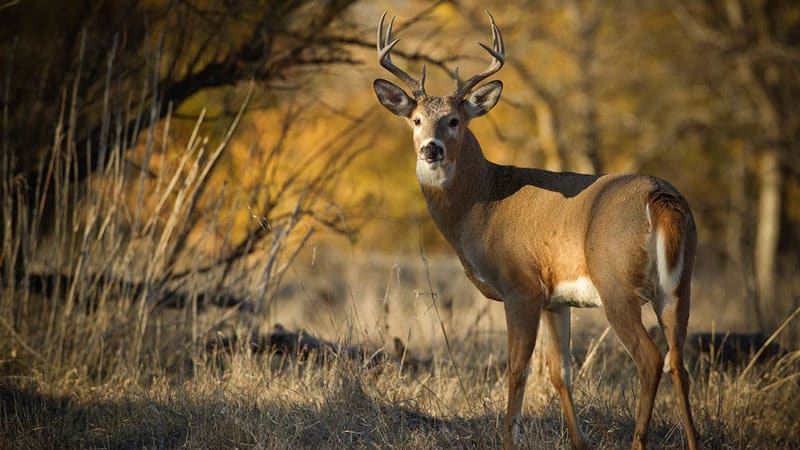 What Times Are White-Tailed Deer Most Active

White-tailed deer are the most sought-after big-game animal in North America.

White-tailed deer are distributed nationwide, from lonely plains to urban backyards. As a result, bowhunting chances are plentiful, but understanding when and where to find deer is vital.

Let’s look at the five times of year deer are active.

1. During The Summer: Plenty of Food Sources

In the summer evenings, you can find some of the best feed times for deer. Across the U.S., they eat alfalfa, soybeans, and milo.

Most bowhunters use the summer to prepare for the upcoming hunting season, which begins as early as September in certain areas.

After finding a “hot location,” explore for travel signs. You may need to use a trail cam to check what animals pass along a given path as you check another.

Hunting on deer trails is great. However, following them away from food areas may find deer bedding areas during the summer and fall.

Bowhunting during the whitetail “rut” is common, although timing and intensity vary.

In the North, breeding peaks in early November, and rut flows later when further south, such as lasting December and January in Texas and Mississippi.

The rut is a hotly debated deer-hunting topic.

Deer hunters base their entire year around the rut as it’s the most active and vulnerable time for older bucks and the easiest time to fill a trophy buck tag.

Setting up your tree stand or ground blind on the downwind side of a bedding area can create all-day action during the rut.

Bow hunters miss out on increased whitetail activity when the bucks and does replenish the calories they burned during the breeding season to prepare for winter.

As in summer, deer seek the most accessible food sources. This is like early season bowhunting. Field edges and food sources offer excellent hunting. (Read Where To Shoot A Deer)

4. Use Acorns As a Signal

Hunting on deer trails is great. Follow them away from a food source, such as acorn-laden oak trees, to find bedding areas.

White-tailed deer love acorns, so as acorns fall from oak trees, deer abandon their primary food source to feed on these tiny treasures.

Oaks start mast in September; however, this varies by year and area, so bowhunting methods vary according to when acorns fall.

Trail cameras are ideal for surveying deer in open areas and finding the best stand of acorns attracting the deer.

In winter, deer paths, bedding areas, and buck signals from the rut, and you can use this in future seasons.

Deer needs every calorie to survive, so Whitetails congregate near food sources.

Deer bed closer to food sources throughout the winter to save energy, making hunting above or near their feeding areas the optimum tactic. 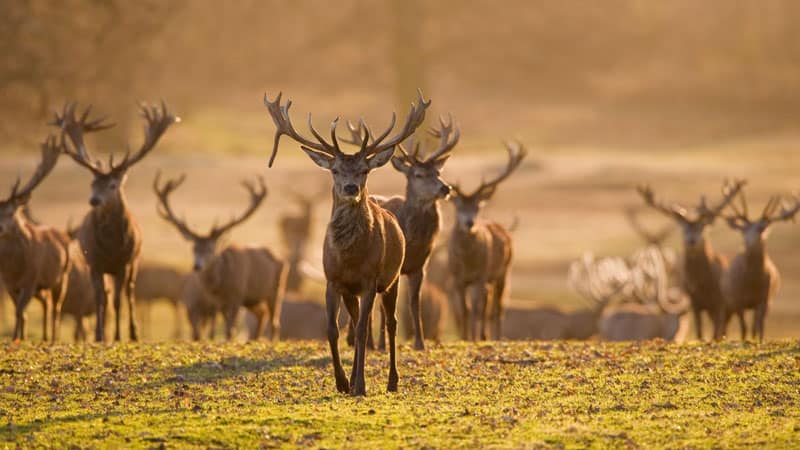 Does Weather Affect When Deer Move?

Weather changes have been proven to alter deer patterns and movements.

Most hunters know that when you think you have these cunning creatures figured out, they make you question all you thought you knew.

Before planning your next hunt, keep these 4 weather conditions in mind.

Bad weather will drive a deer to seek deeper cover and lie down until the rain passes, but a light rain would likely not affect their activities.

Rain affects deer as it impairs their sensory processes and wipes away the scent molecules in the air that deer use to sense danger.

Deer relies on their hearing to detect oncoming danger, so not hearing the crackling of leaves or breaking of twigs might put them vulnerable to predators searching for an easy meal.

While wind speed may not directly change how deer move, it affects where they move. High winds impair a deer’s ability to detect predators; therefore, they change their patterns and become stressed.

These elements won’t stop deer from moving, but they may seek wind-protected areas. (Learn How Much Draw Weight To Kill A Deer)

Cold weather impacts deer’s daily move, say many. Deer responds to barometric pressure variations like all animals; they bed, feed, and move according to the barometer.

An oncoming cold front drops pressure, increasing a deer’s appetite to feed. This impulse makes deer active before and after a front passes.

The most popular explanation for this is that deer move less during full moon phases because they tend to feed less frequently or not because of the extra light that a full moon brings.

The Moon phase (lunar phases) has absolutely no impact on deer movement.

What Time of Year Are Deer Active?

Big bucks frequently drop their guard during the rut and become more active. This is the deer breeding season, which peaks in November and typically lasts from the first week of October through the peak of January.

Bucks, especially huge bucks, change their behavior during the rut to mate with willing does. A tiny number will go far from their home base in search of does to breed with, exhibiting a nomadic tendency.

The majority, however, will stay near home and protect their neighborhood’s core areas from wandering bucks who want to mate with their does.

The rut is the one time of year when you can rely on seeing deer moving around all day.

Times Of The Day Deer Are Active

Deer depart the grove half an hour before sunset, or earlier if it’s cloudy. They return 30 minutes before or after sunrise or later if cloud cover is present.

Once in the woods, deer wander and eat for around half an hour before resting.

Most deer have two or three beds, with most on the side of a hill, out of the wind, and at the base of tall trees or vegetation where the deer can’t be seen from various directions.

When sleeping, deer face downhill or have the wind at their backs to hear and smell danger.

Deer sleep with their heads up and eyes closed but open their eyes at the sound of danger. They don’t get up unless the danger is too close.

Before returning to bed, they stretch, urinate, and eat without moving more than 100 yards.

3 to 4 hours later, they repeat and may lie down. If it’s close to sunset, they may wander the woods until it’s safe to feed in the open.

Deer, especially older bucks, spend up to 80% of the day in or near rest areas.

Get close to bucks’ sleeping areas during legal hunting hours without waking them up to stand the best chance. (Read Rice Bran For Deer – To Attract and Hunt Effectively) 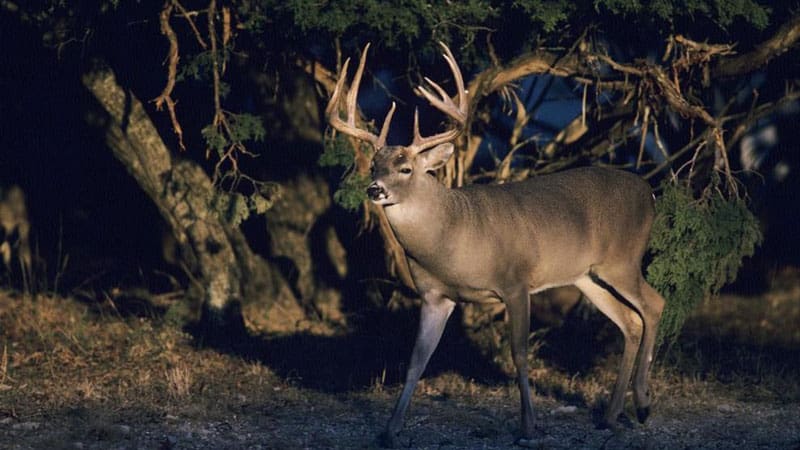 But understanding where and how deer move at night is essential if you want to be a successful hunter.

If you see hunters gathering close to feeding areas, all those hunters can’t be wrong, so there must be something about visiting your hunting spots at night to catch the deer as they venture away from their bedding area.

However, you can catch other hunters who are unaware that deer eat in open fields and drive across these in their trucks to the area they want to hunt. So, the chances of them hitting the big buck are slim at best.

Don’t cross an open field on your way to a deer hunting stand in the morning; identify deer feeding areas, crossings, and travel routes; and don’t park where deer can see or hear your car when they use those areas in the evenings.

Many hunters know they see deer at dawn and dusk, but some don’t realize they rest in the woods throughout the day, wake up around sunset, and move into fields after dark.

They also don’t realize that, when the weather is beautiful, deer often spend the night eating and sleeping in or near the fields, and that about sunrise, they leave the fields to head back to their wooded bedding areas.

In your hunt research, check feeding areas at night.

Several studies (Penn State) on daily deer activity reveal that deer are most active at night, around dawn and dusk, and between 12:00 – 2:00 AM during the fall.

Deer night? Deer leaves their bedding areas around sunset to feed in the nearest field.

Once in the field, they load up on maize, soybeans, alfalfa, etc. In areas with multiple forages, deer may migrate to each during the first few hours of darkness.

From daily deer movement investigations, deer feed for 4-6 hours in the evening, lay down to rest and chew their cud for a couple of hours, then feed for another couple of hours after midnight.

Then they rest for a couple of hours and feed for 2-4 hours before returning to their bedding areas.

Deer like this, ignorant of the hunters, explain why hunters commonly observe deer moving in wooded areas late in the morning during hunting season.

Hunters can take advantage of this migration by spending the day in the woods. 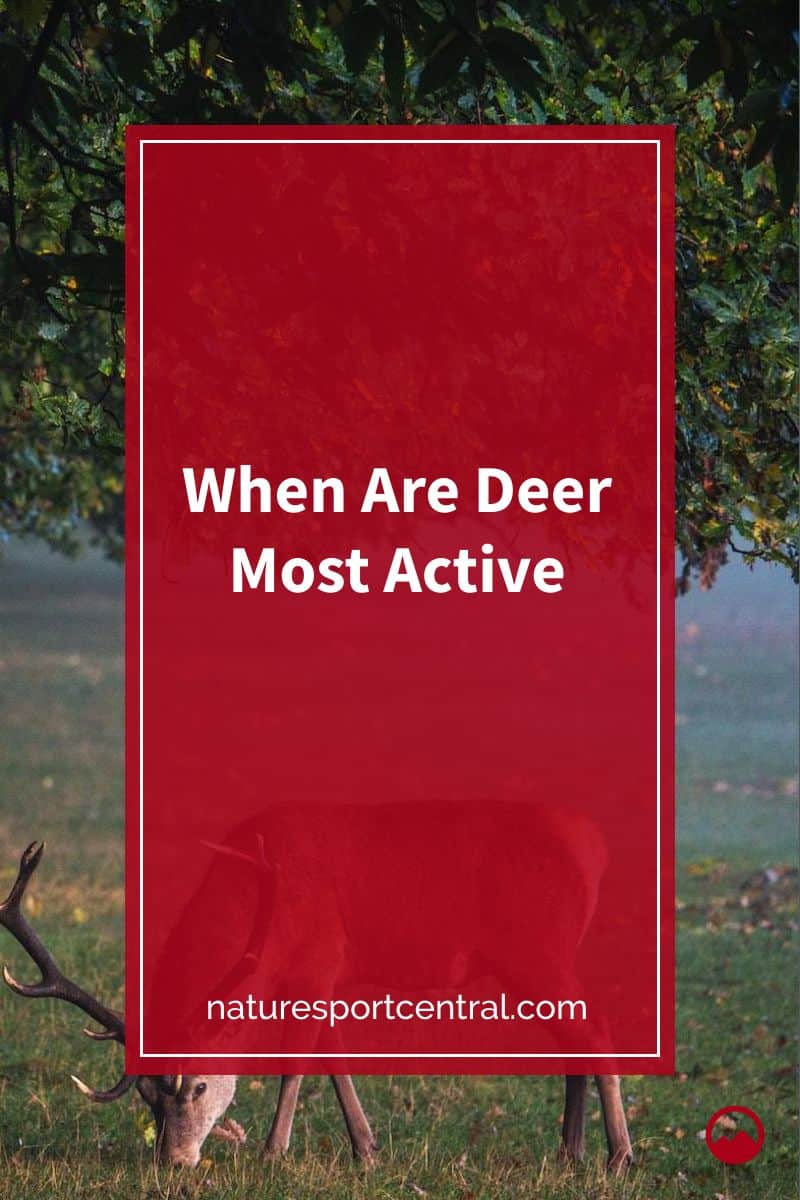