Most of these visitors go during the summer, but is summer the ideal time to visit Sequoia National Park? Every season in Sequoia and Kings Canyon National Park has its charm. There’s something for everyone here, from quiet winter sequoia woods to summer hiking paths.

In our guide, you can learn the best times to visit Sequoia and Kings Canyon season by session. (Read 5 Best Camping Sites in California) 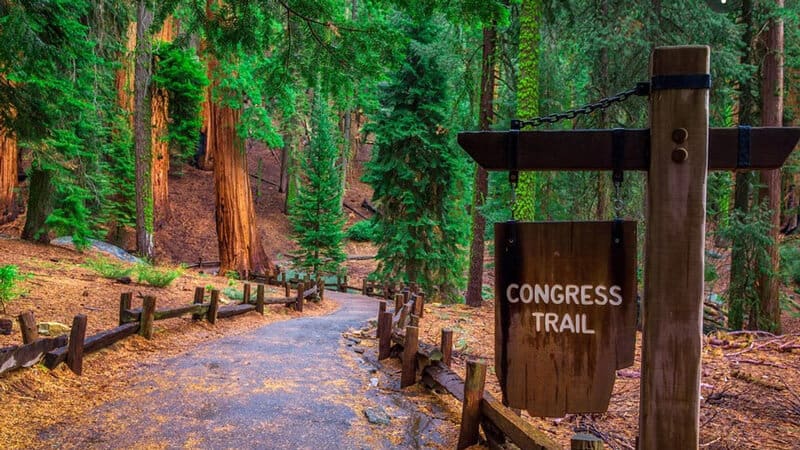 Sequoia National Park experiences all four seasons, with cold, snowy winters and hot, sunny summers. The average temperature varies significantly around the park, depending on height.

The foothills region gets pleasant winters and hot, dry summers, whereas the sequoia groves have mild summers and snowy winters.
You can see here what to expect during each season in Sequoia National Park, including the weather, crowds, and what’s open. 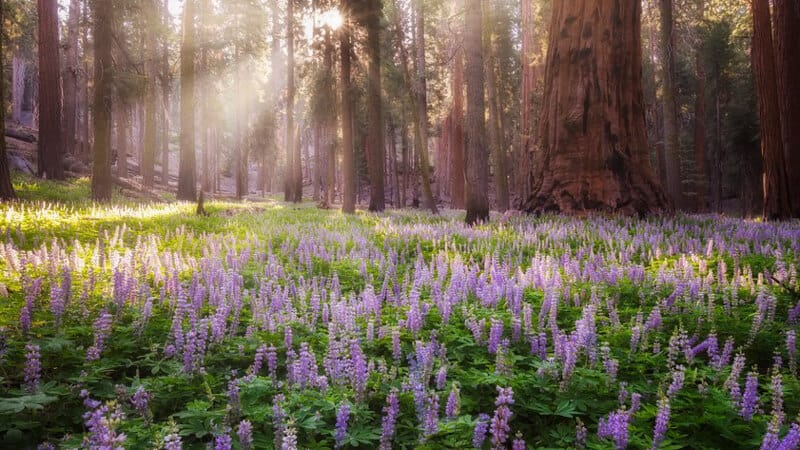 Visiting Sequoia in the spring may require tire chains owing to snowfall on several park roads.

Spring is a fun time to visit Sequoia National Park if you like cold weather and want to avoid crowds.

All park lodges in Sequoia and Kings Canyon National Park are open in the spring.

Looking to camp in Sequoia instead? These are the campgrounds that are open in the park in the spring:

Check locations of hotels and campgrounds to make sure they fit in with your plans.

March is the coldest month in the spring in Sequoia National Park. High altitudes have colder weather.

Generals Highway is usually open year-round south of Lodgepole, though unplowed until the third Friday in March and subject to snow closures. Mineral King and Cedar Grove roads remain closed in March. During snowstorms, higher heights need snow chains. (Learn How Much are Fishing Licenses in California)

April has warmer temperatures than March, although high elevations still have chilly and snowy conditions. The Foothills have warm temperatures and chilly nights.

Compared to March, there are fewer rainy days and less snowfall. The road from Grant Grove to Cedar Grove (in Kings Canyon National Park) usually opens in late April. Mineral King’s road is closed in April. In April, higher elevations may have snowy driving conditions. April is an exciting time to visit Sequoia National Park’s Foothills.

Spring in Sequoia National Park’s Foothills is in full swing by May. Wildflowers bloom and grasses are lush here, with temperatures in the 70s. Unfortunately, snowstorms and cold temperatures are possible in the Sequoia trees in May.

May is a great month to visit the Sequoia forests and avoid the summer crowds. 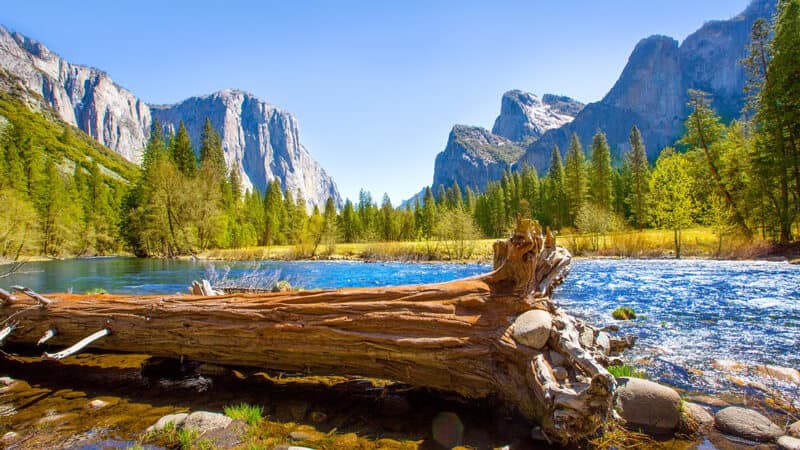 Summer at Sequoia National Park is hot in the foothills but cool in the groves, and it is rare for rainy days.

Summer brings multitudes to the Sequoia forests because of the warm weather, and the summer days have twice the number of visitors as fall or spring days. In addition, summer opens all park roads and campgrounds.

Summer is wilderness season, and only a few permits are provided every day. Discover wilderness permits in Sequoia National Park.

Summer is a wonderful time to visit the Giant Forest Museum and higher elevation Sequoia groves. However, it is not recommended to visit the low-elevation Foothills region because of the high temperatures.

While higher elevations may have snow in June, the park is usually warm and accessible. All park roads are open by June, and temperatures are ideal for hiking. June also has fewer wet days than the spring.

Without appropriate water and sun protection, mid-day hikes in the Foothills can be deadly.

June is a wonderful time to visit the Sequoia groves and iconic attractions like Moro Rock and the General Sherman Tree before the summer hordes arrive.

July is the busiest month in Sequoia National Park. Thousands flock to the famous Sequoia groves to see the world’s largest tree, the General Sherman Tree.

Even higher heights have melted by July. Hot days, cold nights. Summer rain is unusual. July is also the start of the fire season. Fire prohibitions in the park are frequent around the 4th of July.

July is the busiest month in Sequoia National Park, yet it offers excellent weather for hiking and camping.

August, much like July, is a popular time to visit Sequoia and Kings Canyon, National Park. Dry, mild days in the Sequoias and scorching temps in the Foothills. Because of the higher temperatures and dry conditions, August is a high-risk time for wildfires, and fire bans will be in place within the park. (Read Is It Legal To Live In An RV In California)

August is just as crowded as July in Sequoia National Park but provides ideal hiking weather in the Sequoia groves. 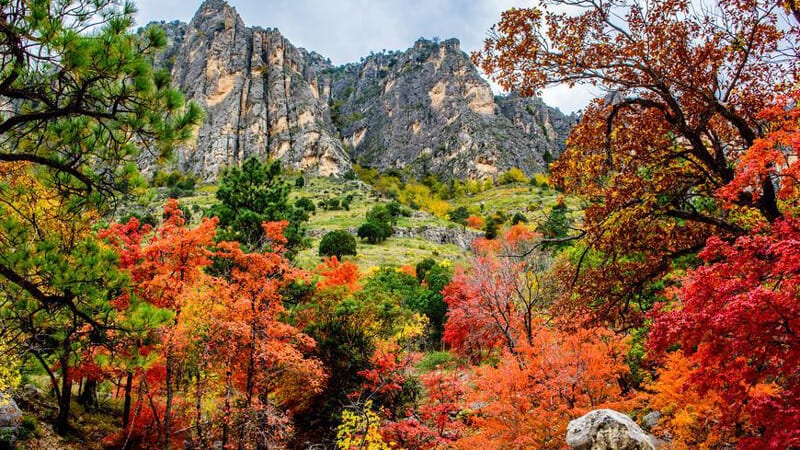 After Labor Day weekend in early September, crowds thin out in Sequoia Park campgrounds and the hiking trails. In early November, only 2,000 tourists explored the Sequoias.

Fall is a great season to visit Sequoia National Park as the late September temps in the foothills are pleasant for hiking or horseback riding.

In September, temperatures cool off from the hot summer weather in the Cedar grove areas, yet foothills are still hot. Rain remains rare, and conditions are dry, and you can expect a higher risk of wildfires and fire bans by September.

After Labor Day, crowds decrease significantly in Kings Canyon National Parks, and the weather is ideal for camping in the higher elevations like Lodgepole.

September is the last month to tour Crystal Cave, with tours usually running through mid-September.

All park roads remain open through September. Therefore, it is an excellent time to explore famous sights in Sequoia and the cedar grove areas, like the General Sherman Tree or the General Grant Tree, without as many crowds swarming around the giant trees.

October is a great month to visit Sequoia. The Foothills get more comfortable good weather with not-so-hot daily highs and cool evenings, and the Sequoia groves are cool at night and crisp during the day.

By October, there are less than 4,000 visitors each day, and there are fewer ranger programs, and come late October, the park entrance may be snowed in.

Mineral King Road ends in October, yet it can be a fantastic time to explore the Sequoia groves if you don’t mind the cold. Warm October weather in Sequoia can be seen in the Foothills.

The park’s higher elevations, including the Sequoia groves, enter winter by November. The park averages over a foot of snow and temperatures below freezing at night.

The Foothills have pleasant days and frigid nights. Fall is a great season to walk or camp in the foothills! Unfortunately, Cedar Grove in Kings Canyon closes for the season in November.

November is an excellent month to camp and hike in the Foothills. You can still visit the Sequoia groves if you don’t mind the cold and snow. 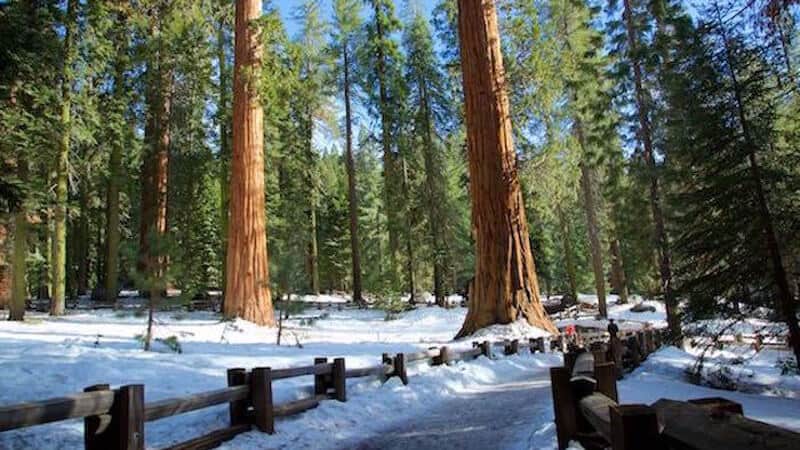 Winters at Sequoia National Park are snowy and freezing, and in winter, roadways often close because of a deep blanket of snowfall.

The season is over for the roads to Cedar Grove in Kings Canyon and Crystal Cave and Mineral King in Sequoia. The route between Lodgepole and Grant Grove is also unplowed from January to March.

December is the least visited month in Sequoia. Snow and rain are frequent. The weather is chilly and snowy at higher elevations.

Closed trails to Cedar Grove, Mineral King, and Crystal Cave will remain closed, and you need tire chains following a snowstorm. However, December is an excellent time to avoid crowds and view the Sequoias.

January is a popular time to visit Sequoia National Park to snowshoe and cross-country ski. Many of the paths are cross-country skiable in the winter. Winter visitors can take a shuttle service through the park’s Giant Forest. January is the busiest winter month, with just over 2,000 daily visitors. (Read Do You Need A License To Drive A Boat In California)

After a snowstorm, the road between Lodgepole Campground and Grant Grove is unplowed in January. In addition, roads to Cedar Grove, Mineral King, and Crystal Cave remain closed.

January is an excellent time to snowshoe or cross-country ski in Sequoia National Park.

It’s not plowed in February and may close after a snowstorm. All three cedar-grove access roads are still closed. However, cross-country skiers and snowshoers can enjoy the Sequoias in February.

Most travelers choose June through August to explore Sequoia National Park. The weather is warm in the Sequoia groves. Summer months bring the heavier crowds, yet all park roads are open, and the park shuttle is easily accessible.

Sequoia National Park has ideal hiking, horseback riding, and camping weather from the summer season to late September, where the giant sequoias and the groves are warm but not hot. The park’s Foothills campgrounds region is best from May to early June and late September to early November.

November through April is the best time to visit Sequoia National Park. However, colder and snowier weather deters many people.

However, tourists can snowshoe or cross-country ski throughout the Giant Forest from late fall until early spring with light snows before snow-free and no longer faces colder temperatures.

Go in late spring or early summer to escape wildfires. July through October is prime wildfire season in Sequoia National Park. Visit in May or June for milder temps and less risk of wildfires and smoke.

Summer camping in Sequoia National Park is excellent from mid-June through early September. Most parks accept reservations in the summer, although summer temperatures camping in the foothills are scorching, so it is better to camp in the Foothills in late spring or until the last weekend of late fall.

The optimum time to drive around Sequoia National Park is in late spring or early autumn. Snow is usually gone by May, and the road to Moro Rock is open. These routes are open until mid-October but become clogged in the summer, thus requiring a shuttle.

Wildlife viewing at Sequoia National Park is best in the spring or early summer. Black bears and marmots are more active now. Hike at sunrise or sunset for the best chance of seeing wildlife.

The General Sherman Tree is best seen from late spring to early fall. The trail is clear of snow and easy to hike. Avoid the throng at General Sheman by visiting in the winter. Snowshoeing or cross-country skiing is usually required.

Summer is the best time to visit Moro Rock in Sequoia National Park. The trail is closed in the winter due to snow, yet it is snow-free in the late spring season and summer.

Therefore, a summer shuttle is essential to relieve traffic congestion. You can, however, avoid the mob and the bus by driving to Moro Rock for sunset once the shuttle stops at 6 p.m.

This lodge is open all year, with summer being the best time to visit as all park roads are open. In the winter, Wuksachi Lodge requires tire chains, snow conditions, and frequent weather forecast checks for the entrance from Three Rivers. 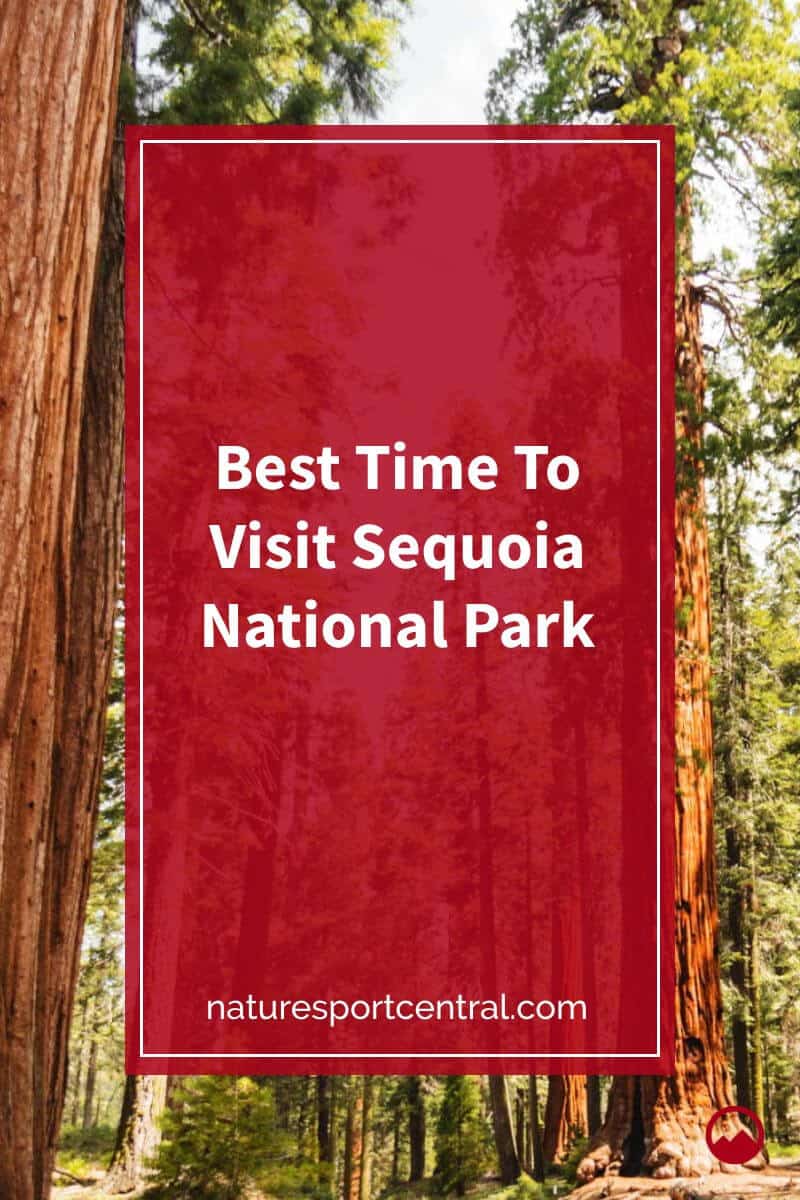