Bowfishing is an exciting sport in which anglers utilize a bow, retriever reel, and a barbed arrow with a bow fishing line connected. It’s frequently compared to bowhunting and referred to as a bow hunter’s off-season activity. Whether you’re bowfishing during the day or at night, there are several tried-and-true methods for a pleasant trip.

Bowfishing can be done in freshwater and saltwater, and the target invasive species in most states is non-game fish, though rules vary by state. The majority of bow and arrow anglers target invasive rough fish species such as carp, gar, and bowfin rather than game fish. 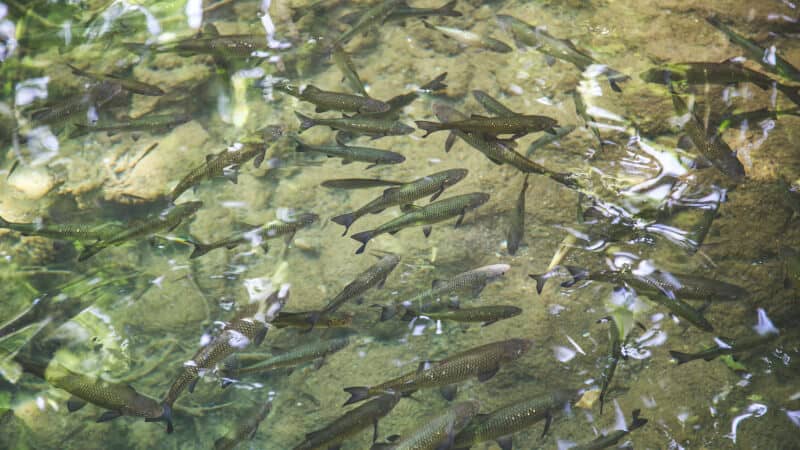 In our guide, you can learn how to get started and learn the bowfishing basics. By the end, you’ll see how to shoot fish with a bow and arrow with very little specialist equipment, just a lot of skill, and a handful of bowfishing tips and tricks, and a good pair of polarized sunglasses to stop the light refraction underwater. (Learn How to Hunt)

Do You Need a Boat to Bow Fish?

Beginner bowfishing is typically for rough fish, or fish you wouldn’t hunt for food, or those not suitable as sport fish, needs skill but not a raft of expensive equipment. A boat isn’t required, although you can bowfish from a boat or other water vessel if you require.

When you first start bowfishing, choose a body of water you know rather than a strange body of water. You must be comfortable around the lake or river you pick as you increase your skin and ability.

Knowing the areas of shallows, where vegetation grows, and where currents run is beneficial. Once ability and experience increase, you can combine your bow fishing techniques with what you know about the body of water where you have gone fishing.

You can quickly find areas from local anglers as these fish compete with other fish that anglers fish for sport or food. Bowfishing is adaptive as a sport, and it has many advantages. Bowfishing can vary in terms of season and time of day. (Read Hunting Small Game)

Anglers can capture a big fish when carp are most active, during the day and in the evening in the summer. If you want to try night fishing, you could do it around the year. However, the spring offers the best chances when the spawn is at its highest.

How Hard Is It to Bow Fish?

Bowfishing is a sport where you don’t use sights to assist you aim. Instead, when bowfishing, you rely on innate muscle memory that builds over time to assist you learn how to aim.

The beauty when you bow fish is that it allows for volume-based accuracy. You’ll have plenty of shooting possibilities if you can find a boat and a bow and get out on the water. There is, however, some subtlety to it. Bowfishers must evaluate the aiming distance between them and the fish and the refraction of light, and the depth of the fish.

To compensate for water refraction, shoot from 10-15 feet away from your prey and aim six inches below the fish. Aim for the belly of a large fish when shooting with your beginner bowfishing kit.

Your bowfishing gear doesn’t have to be top-of-the-range at the start. What you want is something comfortable as you are on the water or at the water’s edge, and requirements differ from shooting in the woods.

The best for early bowfishing success is an ancient hunting bow, or you can use a target bow that is relatively easy to shoot. (Read How to Turkey Hunt)

After the bow, you need a reel. In the middle of most bows, you’ll see a stabilizer hole where the reel would fit. Just be sure to flip the bail so your line can flow as you shoot.

The arrow rest will keep the arrow firmly attached to the bow while allowing it to pass through. You can use the shelf on the bow as an option, but you risk knocking your arrow away if you’re eager or move around because of the unsteadiness if you are freshwater fishing in the shallows from a boat. 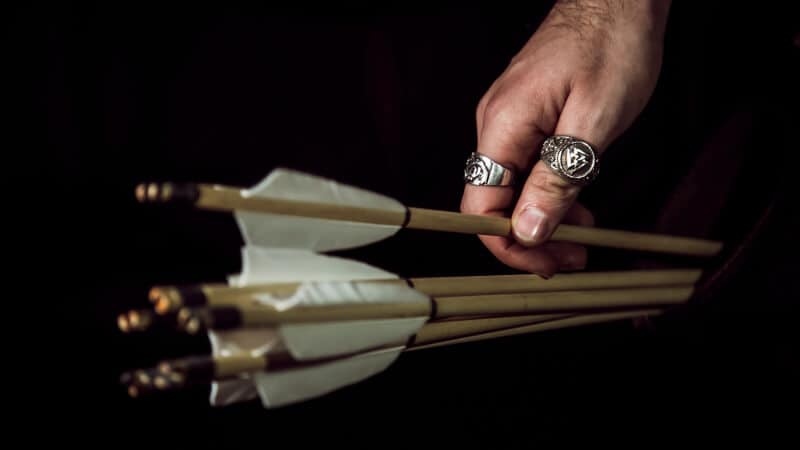 Can you Bowfish with regular arrows?

The last component required for bowfishing is a bowfishing-specific arrow. Bowfishing arrows may appear to be ordinary hunting arrows without the fletching, but that is not the case.

To make them incredibly robust, these arrows are entirely constructed of carbon or fiberglass. They have a little flex, but they spring back to their original shape when released, which is essential for shooting into reeds at a large carp.

Bowfishing arrows contain barbs on the arrowheads required in most states to ensure that you get your fish back in after shooting them. They’re quick release, so once you shot the fish, they’ll deploy, and you’ll be able to bring it to your boat.

Here are several fishing tips when you head off hunting for common carp, grass carp, or other undesirable fish.

Don’t Over Engineer Your Gear

When bow fishing for carp, you’ll see they congregate in rocky shallow water during their spawning season. Tips soften when they strike banks and stones, and on your fish, you need a precise, clean entrance point. Once you use dull tips, it can make a mess of your fish, and they can fall off the arrow. Replace your tips before they typically lose you fish.

Attempt to broaden your horizons, and don’t limit yourself to one type of fishing. Carp and other fish species take over any body of water. While you don’t need a boat, it also means you don’t have to stick to bowfishing from the bank of a river or shore of a lake where you easily see carp in the shallow water.

Pay Attention to Your Reel

If you’re just starting off with bow fishing, you don’t have to spend a fortune. Many types of bow are suitable so long as they have a draw weight of 25 to 50lbs. However, your drum reel can make a difference. Out of all your gear, it will take the most abuse and can cost the most. Keep your budget for a drum reel that will last you years rather than one that is cheap.

Go out and shoot your bowfishing arrows so that you can get a feel for the line and your reel; it can differ between a drum reel and a bottle reel. However, the line will be the same.

Remember how light can play tricks on your sight, and objects will be higher or deeper than they look.

To get an idea, you can use a clear 20 oz bottle full of water and let it sink beneath the surface. Use it for target practice, and you’ll see how far you need to aim from the target with your bowfishing bow and bottle reel.

Unlike regular fishing, where you fight the fish when you bow fish, it is the opposite. Ensure you let the fish tire before you reel them in.

Many bowfishing anglers forget that just because there are barbs on the arrows, it doesn’t mean the fish can’t get away. It is easy to fight your speared fish and widen the entry hole, so the barbs slip back through the fish. (Find the Best Fish Finder for the Money)

Once you have your gear and your all-important fishing license, you need to carry out your scouting.

When you are fishing from the shore, scout ahead of your bowfishing trip so you can check on the fish activity.

The more information you can gather before you head off, the more chance you have of success. It isn’t the case; you can just arrive and expect to pull a carp out on your arrow without an idea where they are.

There are online maps that cover water bodies in each state, and you can find the fish population for any big fish body of water you are heading to fish.

Water types and how the fish live in them can make a difference. While fishing from a boat can appear to be exciting, you can see and get the best results from shallow waters when bow fishing. Keep in the shallows with your arrow ready, and you can typically see the highest results from your blowfish trip.

When you go on about mixing things up, then to bowfish at night is a must-try. You will need the right lights and equipment, and when you have the correct lights set up, nothing comes close to night bow fishing in terms of excitement and fun.

You still have the same aiming and success of shot as in the day, yet it is more thrilling with your catch when all around you is dark.

Keep Away from Windy Conditions

It doesn’t matter if you are aiming with the perfect shot when you bowfish; you have the point in the exact right place just waiting for you to fire the arrow. However, a windy day can ruin all your preparation when bow fishing to catch carp.

Your aim and accuracy won’t be as precise and trying to judge the angle on the water can challenge, if not be impossible.

Water refraction can be a nightmare, and nothing is as it appears underwater. Even when you know to aim low, you can still be off. Practice is the only way you can learn how water in certain areas affects this, especially with the winds or lights at night.

With all the above, you have a good understanding of what to do and where you should do it for the best points of success. While there isn’t too much focus on bow fishing equipment and gear, you need to understand its complexities, even if they are simple by some standards. 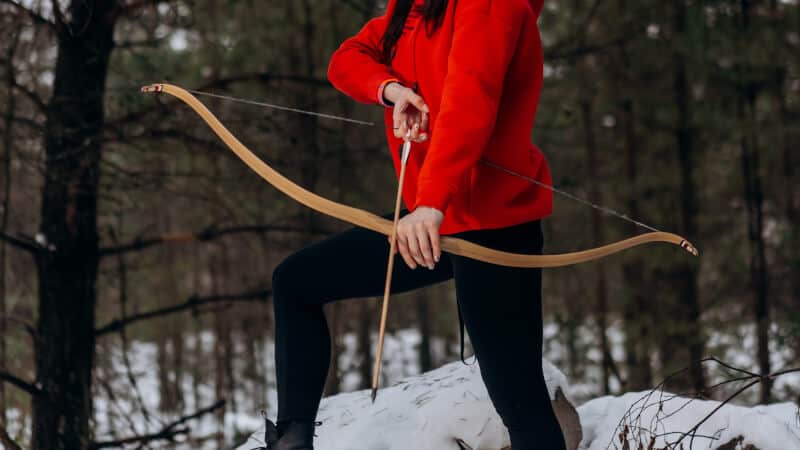 You can find many best bowfishing bows on the market, although stick to something old and not expensive. Nearly every bow fisherman has dropped their bow in the water when surprised by their first catch.

Bow fishing can be done with either a compound or a recurve bow. Both are perfectly functional. The emphasis is primarily on draw time. It would help if you moved as quickly as the fish.

You’ll need a bow that can draw swiftly. Mechanical releases can be used, but for increased speed, a finger draw is recommended. Bows need draw weights of between 25 and 50 pounds.

You don’t need anything too fancy for the range, as most active bow fishing takes place at short distances. 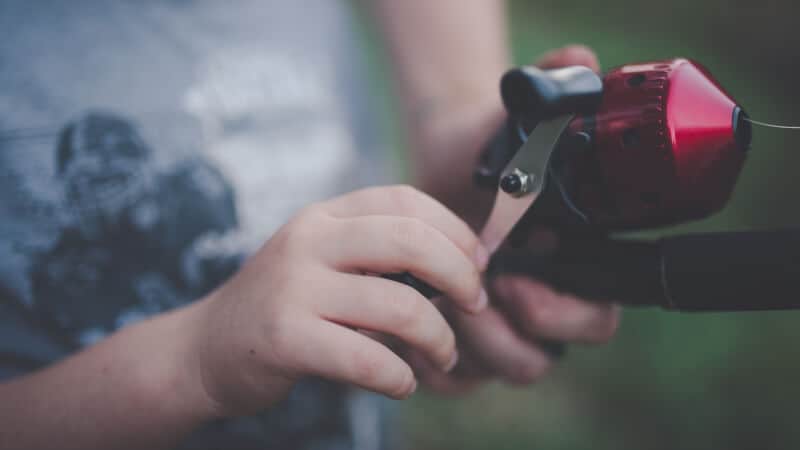 We’ve learned not to skimp on your reel. You can use anything you desire, yet when you have a large carp on the end of the line, you want something reliable and won’t snag the line. Reels can make all the difference in how you catch your fish and how well the line feeds from the reels spool in the first place.

The last thing you want is to release a fiberglass arrow that you expect to be underwater in a second or two, and it comes back because your line is all twisted. 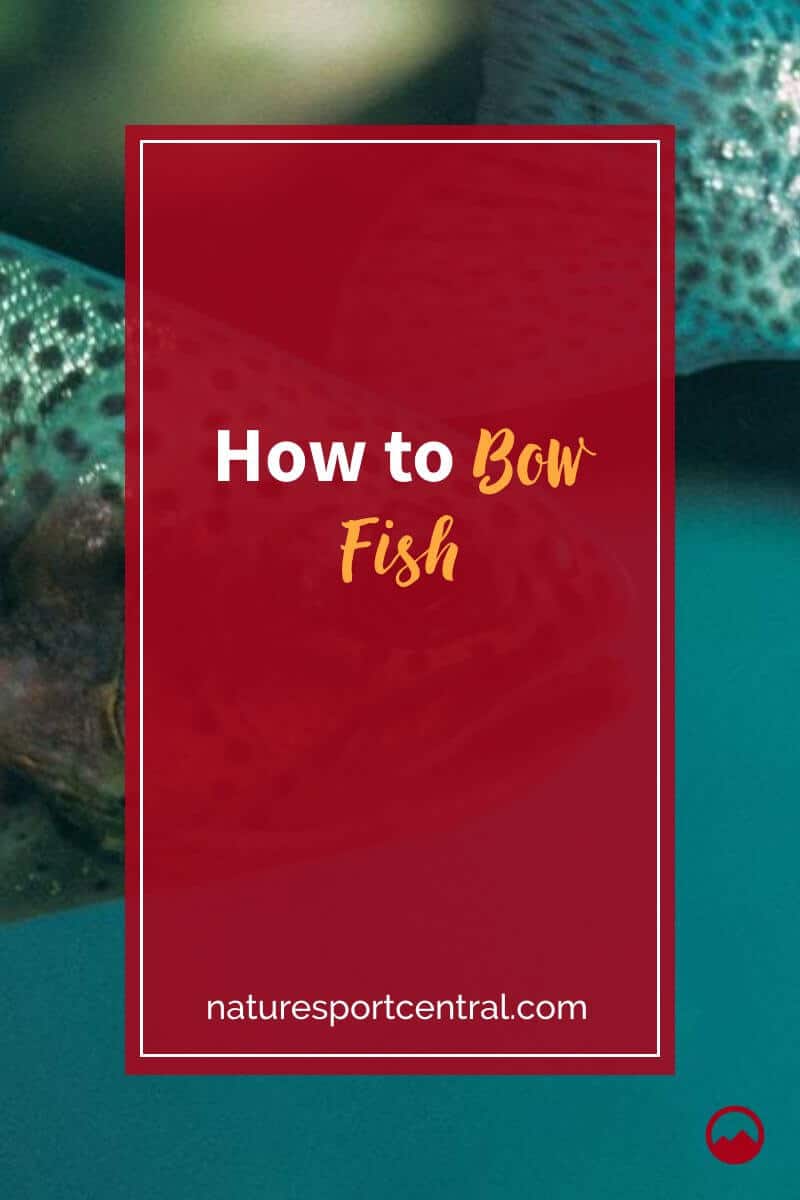