With the snow coming, many new climbers or trail hikers often wonder about using crampons and microspikes. While they appear to do the same thing, there is a considerable difference in the way you use them and the grip they offer on ice and packed snow.

Both microspikes and crampons are inexpensive ways to give your hiking boots extra grip when you need ice traction. The most significant difference you can find is in the spikes. While one can be used with trail running shoes, the other is intended for rough snowy or icy conditions.

For instance, microspikes, also known as trail crampons, if you need extra traction on slippery ground, work like snow chains for your shoes. Such devices work well on trails with hard-packed snow or when shoveling snow from off your driveway, but the shorter spikes offer less grip when on hard ice. 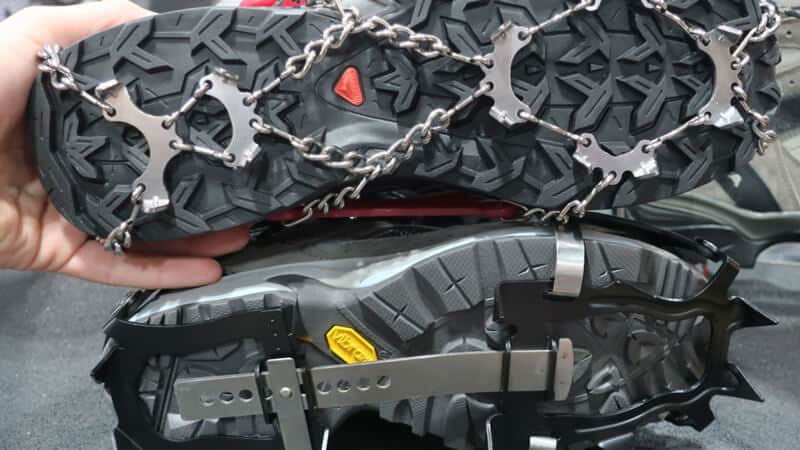 Mountaineering crampons deliver larger 1-2-inch-long points to deliver much more aggressive traction on more challenging snow or if you do any technical ice climbing.

In our guide, you can learn more about the differences between microspikes vs. crampons or if snowshoes with spikes are suitable. By the end, you’ll no longer need to slip on slick surfaces as both can deliver excellent traction based on your needs. (Read Best Hiking In Kentucky)

No matter what you do, you’ll be able to pick the best spikes for hiking, taking on alpine climbs, or shovel snow without the worry of falling.

Can You Use Crampons Instead Of Microspikes?

Here you can find more differences between crampons vs. microspikes.

Crampons, like microspikes, provide traction for winter boots and have long spikes of around 1″ long.

Crampons were made for climbers and mountaineers to reach higher peaks and get traction on snow and ice. Manufacturers of mountaineering and climbing crampons now find new markets with hikers and hunters.

Trail or hiking crampons are like climbing and alpine crampons, but spikes are less severe, and as a result, they are often lighter weight and cheaper traction device.

Most crampons have 8-12 spikes at 1/2- to 3/4-inch-long on the outer sole, where the design allows the wearer to hike or walk in snow and ice naturally. Trail crampons help hikers maintain a firm grip, balance, and ice traction when trekking near mountains.

Trail crampons are extremely aggressive, though not as violent as climbing crampons. It would help if you used a trail crampon when hiking in steep, mountainous terrain or when there is a lot of ice on the trail.

The ultralight aluminum crampons provide traction on challenging, icy terrain without requiring much extra exertion. Heavier crampons can be helpful for hunters in tree stands or blinds, as hunting boots are often heavier than hiking boots. (Find the Best Hiking Backpack Brands)

Wearing crampons require training, and you should have winter mountaineering training to teach you how to safely explore in the winter, use an ice axe, and an avalanche safety course. 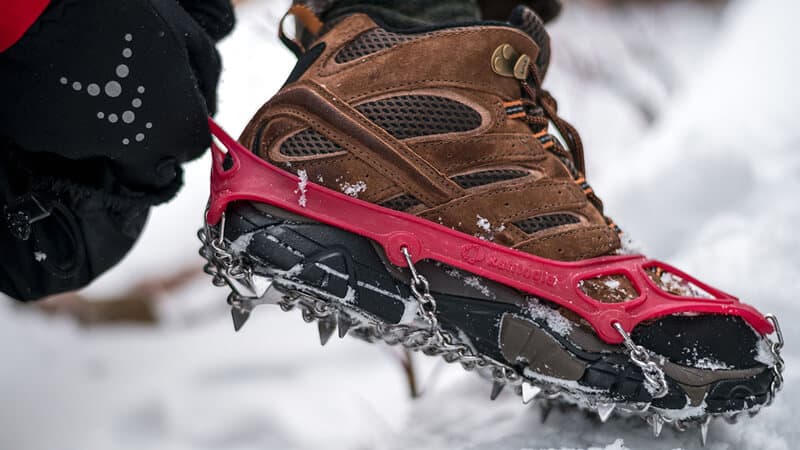 To maintain traction on slippery surfaces around the home or icy trails for winter trekking rather than solid ice. They are suitable for ultralight backpacking or winter thru-hiking on snow-covered paths.

The 6-10 spikes are typically between 1/4″ and 1/2,” and you can also find some wired options rather than spiked, so the border between microspikes and crampons is becoming increasingly blurred.

Like crampons, a microspikes traction device can help on icy hills yet is better suited to traction on meadow trails or gravel roads.

You’ll find the spikes placed towards the inner sole, thus better for icy conditions on flat surfaces. Chains also offer good traction in snow conditions when walking along the sidewalk.

Microspikes are best suited for everyday activities or in flat locations like towns or around the house and moderate winter hiking along snow-covered trails. Microspikes enhance traction for activities other than steep climbs.

While most often, they can be found at an affordable price, the only downside to both crampons and microspikes is that you add extra weight to your feet.

Do You Need Microspikes In Summer?

Crampons and microspikes give traction on moderate snowy conditions to rocky terrain and packed ice.

Here, you can see when you should wear your traction devices.

When to Wear Microspikes

The best use for your microspikes would be during the winter for hiking easier trails, steep hills, or running on packed snow or icy conditions.

However, during the summer, some hikers take microspikes with them in case they need to quickly fasten them to their hiking boot especially in the early summer months if there are patches of snow remaining.

Microspikes work well on flat, snow- or ice-covered trails. They provide you that extra bite when your boots’ treads cease working. Normal boots are like winter snow tires, but you put on tire chains for greater traction when they slip.

Microspikes comprise chains and small spikes, which you slip over your hiking boots or footwear for added traction on packed snow. The designs of microspikes are like tire chains to enhance vehicular traction.

Hiking or running in packed snow or ice conditions on reasonably even surfaces where less traction is required is the greatest application for microspikes.

Wearing microspikes will add weight to your feet and can induce fatigue much sooner over long distances. The recommendation is to wait until you need to wear microspikes before you put them on your feet.

For example, splaying your feet and walking upward like a duck can offer more traction from your boots. (Find the Best Toddler Carrier For Hiking) 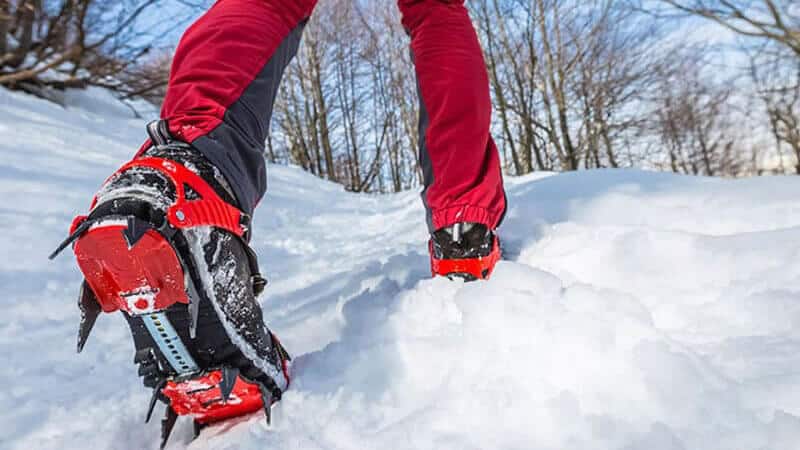 When to Wear Mountaineering Crampons?

Crampons, like microspikes, are shoe-mounted foot traction mechanisms. Crampons are foot frames with huge spikes on the bottom, unlike microspikes. They can be strapped or tensioned to the foot. Some crampons require specific welted boots, while others can be worn with robust ankle-length boots.

Crampons were created for ice climbing rather than hitting winter trails, although some models are now lighter and designed for hikers. Crampons have 6-12 spikes that are 1/2 inch to 1 inch long.

A natural step while mounting steep icy slopes is made possible by these traction devices. Hiking crampons are less and have shorter spikes. Ice and mountaineering crampons are often heavier, with longer spikes and a more aggressive traction pattern.

Many varieties of crampons exist, from those that you can use with any boot or shoe, such as Hillsound Trail Crampon Ultra, to steel crampons. You’ll find these technical crampons have aggressive metal spikes designed for near-vertical ice climbing.

Materials in these are often durable Chromoly steel. Besides this, the stainless steel frames and spikes offer a deeper bite yet have features to prevent snow balling underfoot.

When to Wear Snowshoes?

While no comparison to either crampons and microspikes, snowshoes are still popular and serve several functions.

They provide stability and allow you to float on powdery or deep snow and prevent post-holing when you sink to your thighs or waist in deep snow. Snowshoes can come with integrated crampons to provide traction on ice or packed snow.