Over the years, fish finder technology has improved, making such devices useful for identifying underwater topography and locating prospective fish locations like drop-offs or underwater structures such as sunken trees or even wrecks.

They allow precise identification of schools of fish or individual fish.

However, understanding how to read a fish finder’s screen correctly is a common problem that most novices face. We’ll show you how to read a fishfinder and identify fish, as well as decipher all the other information that can challenge you for a while. 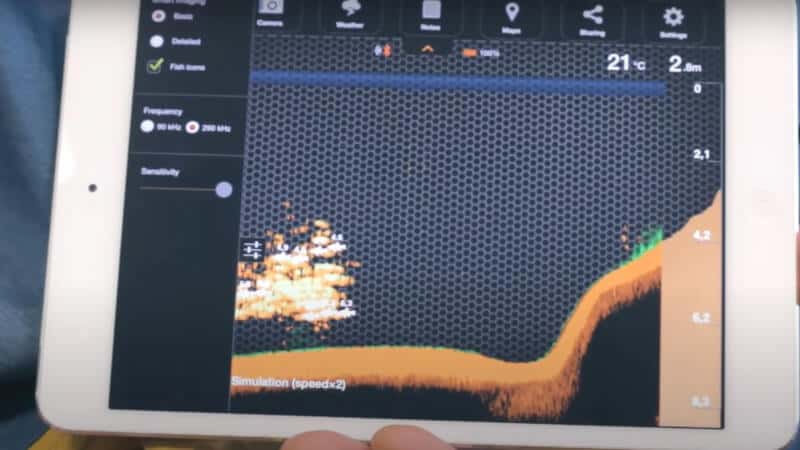 Modern fish finders are essentially small computers using specialized software to show anglers what’s happening beneath and around the boat. Since not every angler is tech-savvy, it’s easy to see why so many anglers get frustrated and think they have wasted their money on a fish finder.

By the end, you’ll quickly learn how to read bottom on fish finder and then start understanding fish finder images to catch more fish.

What Do the Colors Mean On a Fish Finder?

If the fish symbols are enabled, on the FishFinder 300c or 400c, for example, you can see two color fish images on the screen. The fish may be blue or orange. On this fish finder, the color of the fish icons comes from the dual beam transducer, which determines the beam width.

The hard bottom will have a bright yellow color return, with a thicker band of blue below a light line or a bold line, depending on your color palette. The yellow-blue returns fade into an orange color as you move past the hard bottom to a mucky bottom to give an accurate picture. (Learn How Do Fish Finders Work)

The first thing to know about fish finders is that they rely on sonar technology to provide comprehensive information about what’s beneath your boat or kayak. Sending and receiving sonar signals is the basis of fish finder technology.

A fish finder’s transducer emits sonar signals into the water via the sonar cone. When the sonar signals collide with an item, they are reflected to the receiver, which interprets the big fish signals or the fish arch to display them on the screen as various shapes.

In most circumstances, a fish finder’s sonar beam is relatively narrow, which means you’ll only be able to see big fish directly beneath your vessel.However, once you understand how to use this information to its full potential, you’ll have an immense advantage in spotting great fishing possibilities as the fish swims underneath you.

Fish commonly show on 2D sonar finders, including CHIRP fish finders as arches with their apex pointed upward on the screen. For 2D sonar basics, the fish will travel via the sonar cone and throw back a subtly unique signal depending on where the sonar signal hits them in the cone.

Fish frequently show as dots rather than arches on down imaging fish finders. This is because the down imaging sonar has a significantly narrower sonar cone, so it only reveals a small portion of what’s directly beneath your boat.

You’ll be able to detect schools of fish, or even a single fish, with high accuracy once you’ve how to read fish finder screen and spotting fish arches on your fish finder. You’ll also be able to see where your lure is in the water, as well as whether there are any fish around.

The bigger the arch width on your fish finder when reading depth finders, the bigger the fish. With further practice, you’ll be like experienced anglers and can discern between signals emitted by trophy fish and by other underwater objects such as plants and rocks.

Fish-ID technology is available on some fish finders. The fish finder will automatically transform sonar signals into fish ID icons on the display screen, making it easier to identify them as fish.

The technology isn’t 100 percent precise, which means the fish finder will mistakenly designate some objects as fish that aren’t while missing other fish signals. With a little practice, you’ll be able to tell the difference between fish, water depth, and other objects on your fish finder screen better than fish-ID technology.

As a result, many experienced anglers choose to look at arches instead of fish icons. With a little practice deciphering fish arches, you’ll be able to tell them differently from other objects or a half arch with greater accuracy than using fish ID technology.

How Do I Read Down Imaging vs. Side Imaging Signals

Down imaging fish finders work by sending an extremely narrow slice of a sonar cone into the water, allowing you to see what’s directly beneath your boat.

Two sonar cones are sent sideways to the left and right for side imaging. As a result, you can get a better side of the general underwater topography on both sides of your boat.

Use side imaging to check for prospective underwater landscape characteristics before switching to down imaging to locate fish and the size of the fish arch width in a certain location. 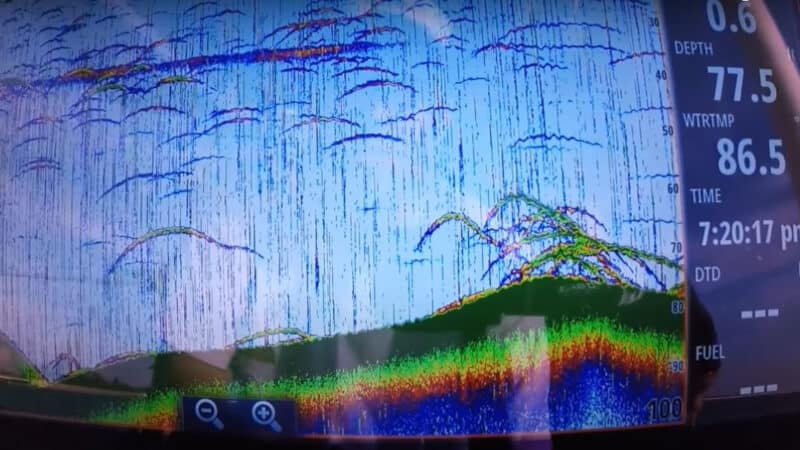 What is Chirp technology in Fish Finders?

When you ask, what is CHIRP on a fish finder, it is a compressed High-Intensity Radiated Pulse (CHIRP) on a fish finder that transmits high pulse energy into the water column. This allows it to create images with a wide range of frequencies up to 117kHz.

CHIRP improves bottom tracking at greater depths and speeds. It gives you an accurate depiction of all the images you view by providing a sharp and exact definition of neighboring objects.

CHIRP sonar vs. regular sonar: CHIRP sonar is smarter and superior to transitory 2D sonars specializing in a single frequency.

When you learn how to read Chirp sonar, you’ll notice that it uses a wide range of bursts of different frequencies to allow the transducer to vibrate at a low frequency, then modulates in higher pulses that are ten times the pulse’s duration. As a result, what is CHIRP on fish finder, it receives up to 10 to 60 times more energy.

How to Estimate Fish Size With a Fish Finder

A bigger arch or dot denotes a bigger fish. The arches can provide more information based on their shape, thickness, and width. Most fish finder display makes it easy interpreting fish arches, which you can use to determine the fish’s length.

The fish arch shape, besides its width, is crucial. On the screen of your new fish finder, a large fish will show as a full, thick arch with a well-defined curve, but lesser fish will show as partial arches that are not as thick or curved.

When gazing at a school of small fish with traditional sonar, they show as dots or half arches and short lines rather than a full arch.

This helps judging fish size from larger fish like bass, which is solitary or forms small groups with plenty of water space between individuals.

You should be able to identify a school rather than individual bait fish underneath your boat and suspended in the water. Under these, the larger predator fish congregate, which could be a brilliant spot to cast your lure.

By dropping your lure close to the bigger fish, you can focus your fishing activity on them with a little practice.

It’s also crucial to learn how to use your fish finder’s depth finder feature besides identifying fish. The depth between the bottom and the water’s surface is displayed in the upper left-hand corner of most fish finders. The temperature of the water is frequently displayed right beneath the depth.

A fish finder’s display also provides information on the bottom structure and consistency beneath your fishing kayak or boat. You can take advantage of this by gently traveling around an area to identify noticeable structures that attract many fish, such as a drop-down or a sunken log. A bold line will be the bed of the water.

You can use the wide beam setting on your fish finder to gain a general overview of the underwater topography of an area. Still, if you want a more comprehensive view of a specific region, you can adjust the scan setting to a narrow beam. This will produce a highly detailed photograph of a prospective site, as well as the fish that inhabit it.

On a fish finder screen, underwater weeds show as tiny vertical lines. Look for holes or depressions, as they can conceal lurking fish, as well as logs and underwater mounds, which attract fish.

A muddy bottom appears as a broad line on the fish finder display compared to a 2D traditional sonar fish finder screen. Hard bottoms show as stronger, thicker lines. Bait balls also appear fuzzy on the fishfinder screen as they break down.

Fish finders are excellent tools for determining depth, reading the bottom contour, and locating underwater features with a narrow sonar beam. This raw data is sometimes more useful to you than marking smaller fish.

Your sonar continuously scans, meaning, even if the sonar isn’t moving, the display will continue to scroll. The bottom will appear flat if your traditional sonar fish finder is stationary, but it may not be.

Ensure you’re trolling or reeling in your fish finder at a calm, constant speed to gain an accurate view of the bottom contour.

You can use the depth scale on the right side of the screen to identify the depth of any features you find.

The depth reading in the top right of the screen shows the bottom depth beneath your fish finder. Remember that this may not be the same depth as the features you’ve just scanned, especially if you’re scanning drop-offs or points.

These are essential features to target for a range of species, such as when carp fishing. They are simple to locate with a fish finder, and the depth contour will change as you troll at a steady speed or reel in your device. Remember to use the depth reader on your display in the upper right corner of the screen on the fish finder or the app to measure how quickly the depth is rising or lowering. (Read our Hummingbird Fish Finders Review)

Switch from wide to narrow beam scanning once you’ve found a drop-off, and then scan again. This can deliver a more accurate profile of the contour change and ensure that you don’t have any scanning “dead zones.”

Set a depth alarm to inform you when you enter your specified depth range if you’re fishing an extensive area, such as in your kayak. You can paddle over shallower water without checking your fish finder this way, then slow down and examine your display when the alarm goes off. 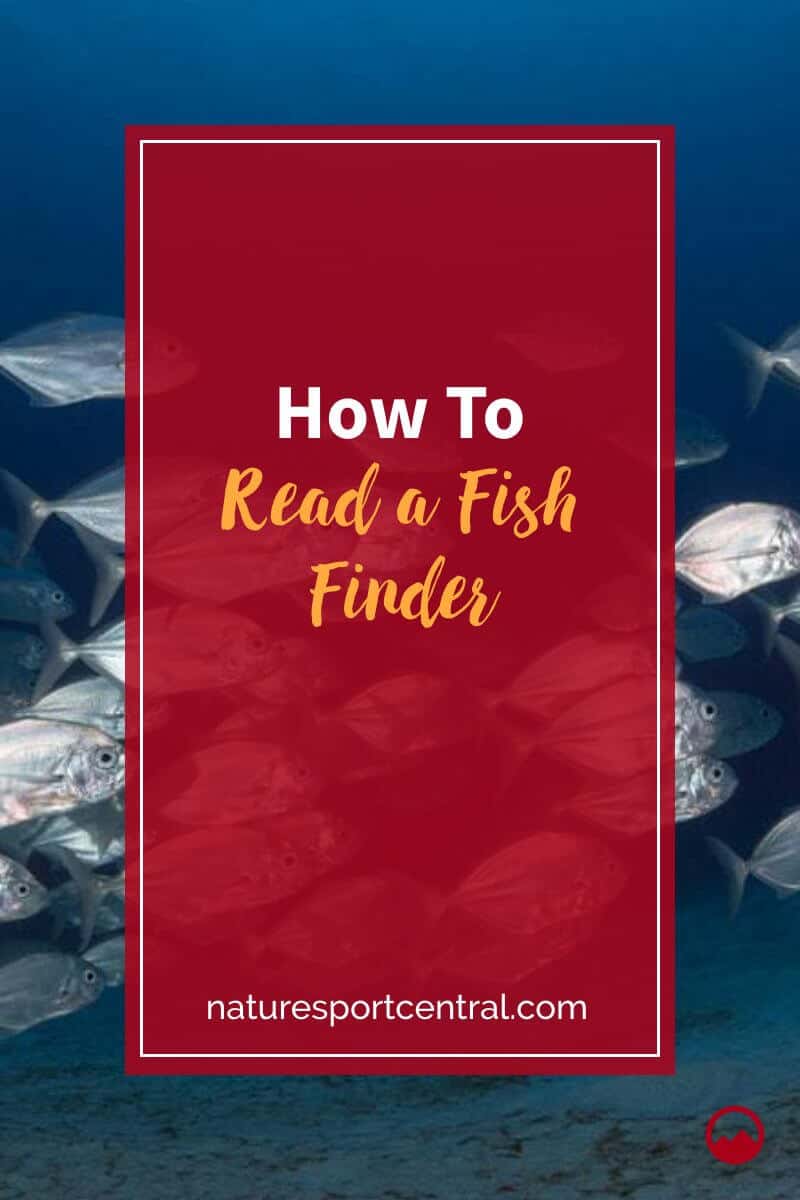